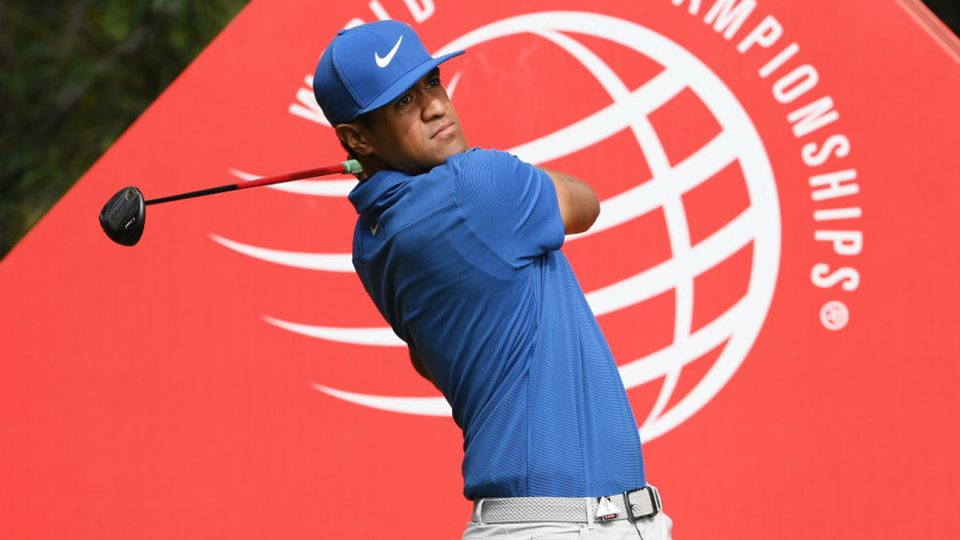 SHANGHAI, CHINA - OCTOBER 26: Tony Finau of the United States plays his shot from the ninth tee during the second round of the WGC - HSBC Champions at Sheshan International Golf Club on October 26, 2018 in Shanghai, China.
Ross Kinnaird/Getty Images

While you were fast asleep or tuning into other sporting events on Thursday night, the second round of the WGC-HSBC Champions took place in Shanghai, China at Sheshan International. With a new leader at the top of the leaderboard through 36 holes, here’s everything you missed.

Tony Finau wrestled the lead of the WGC-HSBC Champions away from fellow American Patrick Reed late Thursday night after shooting a 5-under 67 in the second round. After trailing Reed by two shots following the first 18 holes, Finau now holds a three-shot lead at 11-under over Captain America heading into the third round. Finau shot a 6-under 66 in the first round late Wednesday night.

Finau came out firing and built his three-shot lead over Reed with five birdies through the first 10 holes. However, Finau had a hiccup on 11 when he hit an approach shot from the rough. The shot hit a sprinkler and rolled into a hazard. It resulted in a double bogey and his lead being trimmed to only one shot. Finau then bogeyed at the 13th hole to tighten things up even more.

The lead is down to one shot after an unlucky bounce proves costly for Tony Finau.#QuickHits pic.twitter.com/ZK4Ynlj49m

But Finau rebounded strongly to retake control of the round. He made three birdies over the final five holes to push his lead back up to three shots. Finau is looking for his first victory since the 2016 Puerto Rico Open after 10 top 10 finishes during 2018.

“Outside of that tough break, I played really nicely,” Finau said. “I was happy just to make a few birdies coming down the stretch. It’s hard to swallow when you feel like you hit a good shot and you have a bad break like that. So I was able to just hang in there and make a few birdies at the end, which is nice.”

The defending Masters champion Reed, who held a two-shot lead over the aforementioned Finau after the first 18 holes, was the only golfer in the top 10 to not shoot under par in the second round. After an 8-under 64 to open up the tournament, Reed shot an even par 72 to fall three shots off the pace in the second round. Reed bogeyed two consecutive holes on the front nine, including one that was induced by a missed four-foot putt. Reed was able to salvage the round with a birdie on the 16th hole.

Justin Rose, last year’s winner of the WGC-HSBC Champions, is now firmly in contention to repeat this weekend. Rose, along with Finau, shot a 5-under 67 in the second round. After an opening round 3-under 69, Rose now sits tied with Reed at 8-under and only three shots back of Finau heading into the third round. Rose’s second round featured no bogeys and five birdies, three of which came on the front nine. If Rose were to come from behind and win, it would be fitting given that he rallied from eight shots down last year to win.