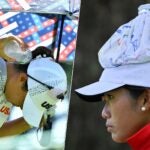 Danielle Kang and Bianca Pagdanganan cooled off in their own way during the first round of the women's olympic golf competition.

KAWAGOE, Japan — Seeing the beads of sweat on Lexi Thompson’s shoulders, you would have thought we were in a Gatorade commercial. After a full week of heat indexes hovering around 100 degrees, the feels-like temp at Kasumigaseki Country Club pushed higher, to 108 degrees Fahrenheit mid-day … in the shade.

It was so hot that Thompson’s caddie Jack Fulghum was forced to bow out after 15 holes due to heat exhaustion. “He just asked me, ‘Do I look white to you?’” Thompson said. “And I’m like, I didn’t really notice, but, he just didn’t look good.”

Fulgham took a seat behind the 15th green after he started feeling unwell. He tried to continue, getting Thompson the yardage to the hole on the 16th tee, but was asked to sit down, where volunteers held ice packs up against his body to help cool him down. Luckily, Team USA manager Donna Wilkins was in the area, so she looped the final three holes. Fulghum received IV treatment onsite and is feeling better, but it’s unclear if he’ll continue throughout the weekend. “It’s so hot out there,” Thompson added. “I’m from Florida and I’m still not used to that bad of heat.”

This comes after Yuka Saso’s caddie Lionel Matichuk was rushed to a local hospital earlier this week with heat stroke. He’s recovering now, but her swing coach has picked up caddie duties for the weekend. To make matters worse, a tropical storm is approaching Japan and could cut the women’s event down to just 54 holes.

The No. 1 player in the world shot 67, the No. 2 player in the world shot 68. Yet the buzzword of the day was electrolytes. Nelly Korda, who shot that 67, said she even felt lightheaded a few times after sticking her tee into the ground. “We were talking, probably drinking a water bottle a hole would probably be sufficient,” she said. “But you get so sick of water. After I’m like, I don’t want to see water, give me some juice.”

Most players these days carry electrolyte tablets or packets they can mix into water on the go. For Thompson, it’s a LivPur packet. I caught up with Team Great Britain’s physio Nigel Tilley behind the 18th green, where he was wisely seated in the shade against a grandstand. “How many of these do you see out there,” he said, holding up his umbrella. “Everyone out there should be walking with one.”

Tilley has been urging Team GB’s players to drink at least one bottle of water every other hole, dumping electrolyte tablets into every other bottle they consume. “We had Tommy [Fleetwood] and Paul [Casey] downing 10 bottles per round,” he said.

The science behind it is simple. Sweat removes important nutrients from your body that water struggles to replace. Tilley hands out “Hydro tablets” to Team GB players to replenish any sodium, protein or Vitamin B deficiencies they incur over the course of seven or eight hours in the heat. That’s almost surely what hampered Fulghum. Wilkins gave him an electrolyte bottle, she said, and he immediately chugged it.

3 other things you missed overnight:

The pride of India is BACK

After a rousing first Olympics in 2016, where Aditi Ashok began 68-68 in Rio, she is back to those scoring ways in Japan. Ashok is just one shot back of Medelene Magstrom’s (Sweden) lead after shooting 67 in the first round Wednesday. Representing India once again, Ashok gained more than three shots on the field with her putter alone, adding truth to what course setup manager Kerry Haigh said Tuesday: “If you hit good putts on line, they go in.” Simple as that.

Ashok has her mother caddying for her this week, after her dad caddied for her in 2016. She talked afterward about that experience in Rio, recalling how much her social following “blew up” after her first few rounds. From about 400-500 followers to about 14,000, she said. She became known as the golfing girl who did well at the Olympics to fans back in India. When asked what that social following might jump to if she won gold, she laughed. “Oh, I think it would go to like hundreds of thousands for sure,” she said. “Yeah, it would be really big.” She’s at 22.7k right now.

Title defense off to good start

Inbee Park is also back. The seven-time major winner won gold at the women’s event in 2016 and kicked off her title defense with a two-under 69. She made 11 straight pars in the middle of her round, finishing with a disappointing bogey on 18. Park talked about how much better she’s feeling this week than she was when she won five years ago. She was battling a nagging injury in 2016, and was feeling pressure just to stay in the field.

“My family, my staff and probably the whole of the Korea was worrying that I am not in the best condition,” Park said Monday. “So I think that was kind of the pressure that I was dealing with and to overcome that was really, really hard.” This week, there’s no injury to speak of. Park will get going again Wednesday night at 9:36 ET for viewers in the United States.

Just days after winning the U.S. Senior Women’s Open, her first career senior major, Annika Sorenstam has arrived in Japan. Sweden’s greatest golfer of all-time was there to greet her countrywoman Madelene Sagstrom on the 1st tee. It might be total coincidence, and it might not be, but Sagstrom took the baton from Sorenstam and is leading the women’s Olympic competition after 18 holes.

The 75th-ranked player in the world reached five under through 10 holes and kept her card clean the rest of the way for a 66 and the round of the day. The course has tended to play longer for the females than the men’s competition, and Sagstrom ranks 13th on the LPGA Tour in driving distance. She reached the 5th green today in two — Kasumigaseki’s longest hole — which few other players were able to do. It took everything she had, though. Driver off the tee, then driver off the deck.

“Some holes like that I can take advantage of,” she said. “And just some of these greens coming in with shorter irons helps and also even if you’re in the rough having a short iron in will give you at least, if you can’t get the spin it will at least give you the height of it.”