‘It had to be complicated:’ How the new HBO Tiger Woods documentary came together 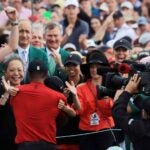 Triumph, like the 2019 Masters, is just one side of the Tiger Woods story.

Tiger, HBO’s new documentary on the life of Tiger Woods, begins with a plea.

“Please forgive me, but sometimes I get very emotional when I talk about my son,” Woods’ late father, Earl, says in a heavy, cracking voice. “My heart fills with so much joy when I realize that this young man is going to help so … many … people.”

Earl, who is speaking at a college golf awards ceremony, is in a dark suit with a black tie. Large, wire-rimmed glasses bounce light off his face and back toward the camera. Tiger is seated to his left.

“He is going to bring to the world a humanitarianism which has never been known before,” Earl continues. “The world will be a better place to live in, by virtue of his existence and his presence.”

And then, the petition.

“This is my treasure, please accept it and use it wisely.”

For the remaining two hours and 58 minutes of the unflinching two-part documentary, viewers are left to ponder a question.

To whom was Earl speaking?

Tiger, which will air on HBO over the next two Sundays at 9 p.m. ET, features no exclusive interviews with its subject. Co-directors Matt Hamachek and Matthew Heineman made two requests to speak with Woods — once before filming began, and another as the HBO team grew closer to production. He declined on both occasions, citing a contractual conflict.

Heineman and Hamachek (alongside executive producers Alex Gibney, Sam Pollard, Stacey Offman and Richard Perello) instead relied on several thousand hours of archival footage and 50-60 hours of interviews with more than two-dozen subjects. The directors also leaned on Jeff Benedict and Armen Keteyian’s 2018 Tiger Woods biography (Benedict and Keteyian receive executive producer credits for their contributions to the film).

“There was a constant drive on our part to make sure that even though we didn’t have Tiger, we gave him a voice, and we let the people who knew him well put us inside of his mind,” Hamachek told GOLF.com “What we really wanted to do was reach out almost exclusively to people who knew Tiger and his family intimately.”

Part I focuses on Tiger’s childhood and his maturation into a preternaturally dominant force. Among the interviewees are Tiger’s kindergarten teacher, Maureen Decker; his high school girlfriend, Dina Gravell; and his former caddie, Stevie Williams. (GOLF Senior Writers Alan Shipnuck and Michael Bamberger also appear in the film.)

Tiger digs into the golfer’s up-and-down relationship with his father. The filmmakers explore how Earl famously (and meticulously) bolstered Tiger’s mental strength; how, like many sons with their fathers, Tiger struggled to accept Earl’s mistakes; and how the two grew apart in the final years of Earl’s life.

“You have to earn their trust and their respect,” a teary-eyed Earl says at one point. “I have a phrase, ‘Love is a given, trust and respect are earned.’”

The documentary’s second act begins in the aftermath of Earl’s death, where the younger Woods appears pinned between grief and the birth of his own international superstardom.

“I’m happier than I’ve ever been in my life,” Woods says in an interview from that period. “I’ve got a wonderful balance on the golf course and off the golf course, I couldn’t ask for a better year.”

Yet in assessing Woods’ fame, the film draws a careful distinction between its honorific portrayal of Tiger’s on-course success and his off-course behavior.

“If you listen to what Tiger Woods has said over years in the public spotlight, he’s made it very clear that he wishes he didn’t have to deal with [fame],” Hamachek said. “His boat is named Privacy for a reason, right?”

As the story hurtles toward the most infamous date in Tiger’s timeline — Thanksgiving Day 2009 — Hamachek and Heineman simultaneously cast their protagonist as a victim of his circumstances and of his own doing. In the filmmakers’ eyes, Tiger is neither wholly blameless nor culpable.

“We have to tell the story accurately, but every detail has to be there for a reason.”

Still, long before one of Tiger’s mistresses, Rachel Uchitel, appears on screen, it’s clear the directors have no intention of avoiding the most difficult chapters in his life.

“We would remind ourselves … that [Tiger’s children] could watch this someday,” Hamachek added. “We have to tell the story accurately, but every detail has to be there for a reason.”

Tiger’s physical struggles inspired what is perhaps the finest detail in the film: a brilliantly executed edit of Woods’ swing which begins in the modern-day and morphs back to his first televised appearance on The Mike Douglas Show at age 2. The idea came from producer Jenna Millman and editor Dan Kohler, who were tasked with visualizing the depth of Tiger’s physical wear.

Ultimately, Tiger‘s shifts illustrate something raw and sobering — a portrait of both personal struggle and triumph. It is rare to see a figure of Woods’ stature portrayed with such candor and vulnerability. Rarer still is the film’s refusal to form a central narrative around what it hopes its audience will see in its subject.

“If Tiger were to watch the film, I would hope he’d see a nuanced portrait of his life,” Hamachek said. “I hope he’d be able to see how much effort we took to present an empathetic picture of him and what we had to go through, and that we were fair.”

Tiger is an unusual character study. The film does not pick sides. It does not glorify a hero or indemnify a villain. Rather, it dares to suggest Tiger Woods might simply be something else entirely: a human being.

In 1996, Gary Smith penned a cover story for Sports Illustrated about a 20-year-old whose father believed he was destined to change the world.

The article ran more than 7,000 words under the headline “The Chosen One.” Its subject was an ascendant but still unproven golfer (in the professional ranks, anyway) who some believed was unqualified for the publication’s prestigious Sportsman of the Year award.

The story depicts a battle: Tiger versus the Machine — a struggle in which a prodigious, multi-cultural talent attempts to unseat the world armed only with a balata ball and a Nike swoosh. In the piece, Smith pins Tiger’s limitless potential against the unconquered adversaries of fame, greed and fortune.

“One of the most fascinating things about Tiger’s story is that all these people around Tiger built him up to be this perfect person,” Hamachek says. “On Thanksgiving night in 2009, he revealed himself to be human.”

How has Tiger fared in his battle versus the Machine? The filmmakers do not provide a clear answer, perhaps because there isn’t one.

“I think there’s this thing in our culture where if you admire somebody you can only say glowing things about them, and if you don’t like someone you can’t see the good in them,” Hamachek said. “I don’t buy into that. I think things should be complex. I have a great deal of admiration for Tiger. In both good and bad ways, everyone said to us, ‘Look, this has to be complicated.’”

Tiger is not flowery and feel-good. It is not a perfect depiction. Some scenes are difficult to watch; others are difficult to remember. Some of that is owed to the complexity of Tiger’s life, his flaws and his mind-bending achievements, all of which played out under a white-hot spotlight. Some of it is owed to everything else.

“I think it’s a timeless story,” Hamachek said. “The fascination around Tiger — this is a story about the man and also about American culture and human nature and fathers and sons, and the way that the public interacts with fame.”

At the film’s conclusion, Earl reappears.

“This is my treasure, please accept it and use it wisely.”