The hardest part about transitioning from player to analyst, according to a 3-time winner 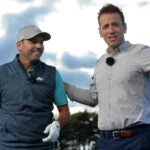 Nick Dougherty shoots a segment with Sergio Garcia in 2017.

Englishman Nick Dougherty had a long career as a professional golfer, spending nearly 15 years competing on the European and Challenge tours. He won three times in Europe between 2005 and 2009 before retiring from competitive golf to pursue a career as an analyst with Sky Sports.

Now, Dougherty still spends his time on Tour, but his days are filled interviewing his former adversaries and providing commentary for TV viewers overseas. On this week’s episode of Off Course with Claude Harmon, Dougherty opened up about the most difficult part of his transition from player to analyst.

“The hardest thing I found when I first came across was feeling like I was gonna be letting down mates,” Dougherty began. “Because unfortunately I was young enough — I played with all these guys. Whether it be Rory, or DJ — I played with all these guys. So I feel an attachment to them. We know each other, we’re sort of the brothers out there, that played alongside each other and we know what it’s like. But at the same time, it’s your duty in this industry to sometimes say tough things.”

“You have to address a tough situation,” Dougherty said. “He really blew that tournament there at the end. And you have to ask difficult questions.

“But I’d like to think that, as much as we never like hearing bad things about ourselves, the guys do appreciate that,” Dougherty continued. “Sometimes it’s like, that’s how it is. That’s the nature of the business that we work in. I think that’s been one of the hardest things for me.”

For more from Dougherty, including why he thinks mental-health awareness is so important in golf, and what it’s like to run out of balls in the middle of a tournament, check out the full interview below.