Inside a surprising twist in Greg Norman and Tiger Woods’ relationship 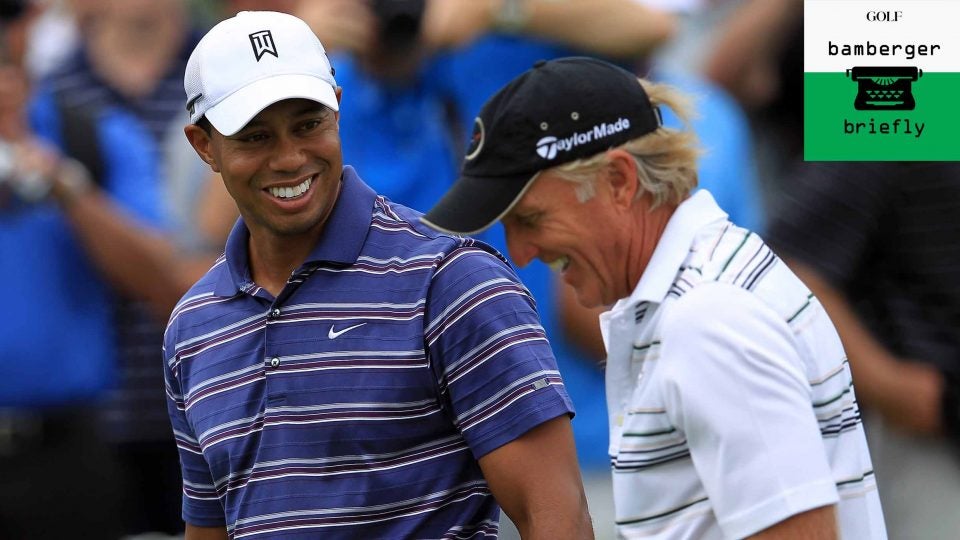 Woods and Norman at the 2011 Australian Open.
getty

Let’s start with the aftermath, since we all know where this is going, with Patrick Reed helping Tiger Woods into his green jacket on Augusta National’s 18th green, ringed by fans, five people deep. Tiger’s fifth Masters win. His 15th major championship. His first in nearly 11 years. His first with his two children on hand to see it. He holed that two-footer to win and the ground shook.

The Masters is about winning, of course, about being a member of the club within the club. That helps explain why Jack Nicklaus (six coats), Tiger Woods (five) and Arnold Palmer (four) are icons. But so, each in his own way, is Bob Goalby (one), Tommy Aaron (one), Larry Mize (one).

And not winning at Augusta, you could say, gets you in a special club, too. If you ever talked at length to Ken Venturi, Johnny Miller, Tom Weiskopf or Greg Norman you know that. Twenty or thirty years from now, will Rory McIlroy and Francesco Molinari be on that list? For their sake, you hope not. But better to be on that list than not. Right? A privilege, to be on that list.

Norman is an extraordinary person. Charismatic, for one thing. Truly charismatic. Beyond that, I have found his insights into both Tiger and the Masters to be mesmerizing. The tournament — the prospect of that coat — will make shots you can play in your sleep suddenly go haywire.

News
When did ‘The Second Life of Tiger Woods’ truly begin?

As for Tiger, while I was reporting the book and talking to Norman occasionally, it became clear to me that even Norman, for all his confidence and success and fame and fortune, wanted a hint of recognition from Tiger. He wants to know that Tiger knew that Greg Norman had once been the king of the hill. That Greg Norman once knew what it was like to have every eyeball on him, hairy and admiring and otherwise. And he wasn’t getting that. Norman wasn’t getting that nod from Woods, icon-to-icon. Norman didn’t get it in the 1980s, the 1990s, in this new century, not before the 2019 Masters and certainly not after it.

It wasn’t like they lived on different continents. They are both members of Medalist Golf Club in South Florida. They live about two miles from one another in oceanfront compounds on Jupiter Island. They both have phones.

I don’t think Norman would agree with this, but I sensed from him the most basic of human responses to the act of being ignored by Tiger Woods: hurt. He was confused, and he was hurt. Men in general and world-class athletes in particular are loathe to admit to anything raw and emotional and intensely personal. But they bleed, too. Everybody wants to be respected in their peer groups. And hurt is hurt.

Just got back from a wilderness trip.
Congrats on your Masters win. Your journey back
to the top has been truly impressive.
Go do a Federer.

Both men love tennis. Norman knew that Tiger would know, intimately, about Roger Federer’s late-career renaissance, including his wins at the 2017 and 2018 Australian Opens and at Wimbledon in 2017.

Weeks passed, months passed, a new year was ushered in. No response from Tiger. To Norman, Tiger’s silence spoke volumes, as silence does. Another sign that, for whatever reason, Tiger had some kind of issue with Norman. You could say that was the case with some of the other greats of Norman’s era. Tiger has had his struggles with Tom Watson, Nick Faldo and Curtis Strange. But with Norman, the man he supplanted as the No. 1 player in the game, it was especially true.

And then something unexpected happened. On a quiet Sunday in January, Norman and his grown son, Gregory, an adventure-sports entrepreneur and an accomplished waterman, ran into Woods in South Florida. Woods thanked Norman for his note. And then the two men had a warm, open, real conversation about all manner of things, including Tiger’s swing and his win. They compared notes on aging bodies. They talked about their children and the state of the game.

The two had known each other for well more than 25 years, ever since Norman took Woods out for a nine-hole round when Tiger was in high school and Norman was the best player in the world. And that conversation, Norman said, represented the first time they had ever had a true, constructive and engaged discussion.

When it was over, Norman was pleased. It helped him to see, likely for the first time, what I had seen since Tiger had returned to public life after his Memorial Day 2017 DUI arrest. It wasn’t that Tiger was a changed man. But he was changing.

Michael Bamberger may be reached at Michael_Bamberger@Golf.