Why Greg Norman challenged a heckler to fight at the 1986 U.S. Open

Fans heckling golfers is a natural part of any tournament. Most of the time, golfers just brush off the peanut gallery and ignore the criticism. But some take the bait and let it get the best of them. And it happened to one of the best to ever play the game of golf.

Greg Norman was on the verge of winning his first major title, as he led the 1986 U.S. Open at Shinnecock Hills after three rounds. But the 20-time PGA Tour winner said that it was a rough crowd in the gallery during Sunday’s final round.

“It was interesting with the crowd reaction,” Norman said to sportscaster Dan Patrick on the latest episode of “Undeniable with Dan Patrick.” “Just saying ‘Go home you effin Aussie’, ‘You can’t play golf’, ‘You’re a choker.’ It was very hard because they get you in between walking from the green to the tee when you’ve got six feet of space and they’re yelling in your ear.”

Some golfers are able to dish it back and not let it impact how they play. But that’s not what happened this time to the Shark, who would go on to do something that golfers are not encouraged to do when frustrated.

“It was hard to focus on it and then I kinda lost my cool,” Norman said. “On one of the holes on Sunday, I should’ve never done it, I went up into the gallery and I just knew who it was. There was this sea of faces and I just swung to the right, walked right up to this guy, and I said ‘Look, if you want to say something to me, say it to me in the car park at the end of the round when I can do something about it.'” 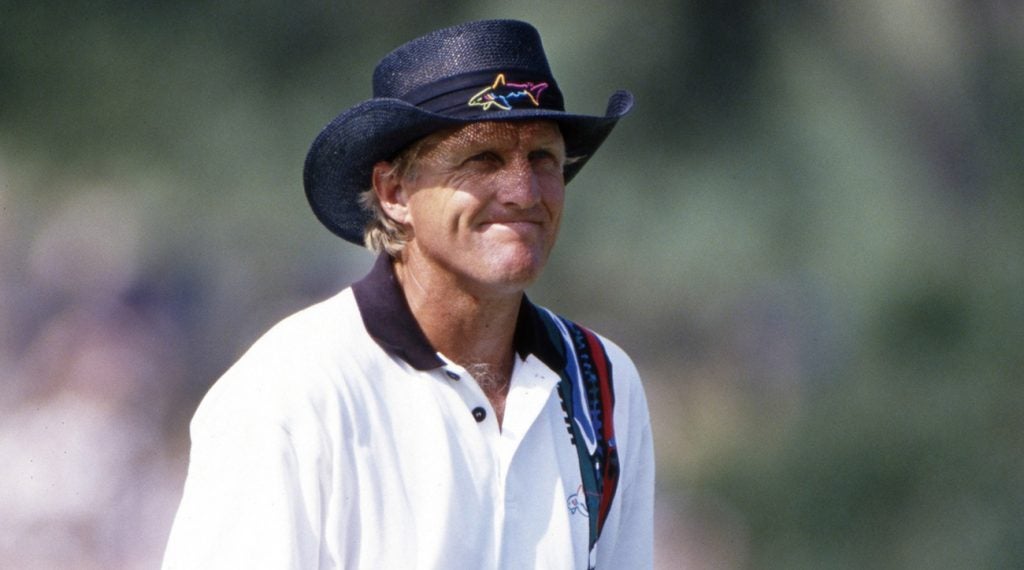 Like Happy Gilmore, Greg Norman once let an opponent get the best of him during a round of golf.
USA Today Sports

Looking back on it, Norman says he approached the incident the wrong way.

“I broke the sporting code of golf,” the 64-year-old Norman admitted. “I should’ve never done it. I had just had enough. But it was just an education for me to tune yourself out or block things out a little bit better.”

As a result, it cost Norman his first major championship. He shot a final round 75 to finish six shots behind the winner, Raymond Floyd. However, Norman’s first major title would come only a month later when he would emerge on top at the Open Championship.

When asked if the heckler met him in the parking lot after the round, Norman’s response was short and sweet: “Hell no.”

‘If this goes in, what am I going to do?’ What Tom Kim’s magical day felt like up close
Go to mobile version