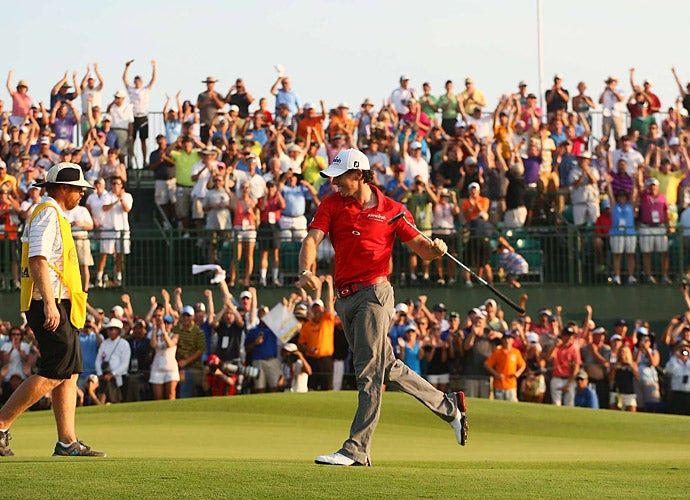 Darren Carroll/Sports Illustrated
1 of 10
10. Rory McIlroy, 2012 The young Ulsterman validated his 2011 U.S. Open win with a four-win PGA Tour campaign, with one major. That particular major deserves special mention -- a record eight-shot beatdown at the PGA at Kiawah Island's Ocean Course. McIlroy gobbled up two FedEx Cup playoff wins, won the U.S. money title, then wrapped up the European Tour's money crown as well. Phenomenal golf on both sides of the Atlantic.
Robert Beck/Sports Illustrated
2 of 10
9. Tiger Woods, 2001 Five PGA Tour wins, including the Masters, would be a career year for anybody -- anybody but Tiger. For folks with short memories of just how dominant Tiger was, year-after-year, 2001 was only Woods' seventh best season in his pro career. Yet, he won Arnie's event at Bay Hill, Jack's party at The Memorial and The Players, among others. 18 top-25s in 19 events, one other European Tour win -- amazing, but routine for Tiger.
Fred Vuich/Sports Illustrated
3 of 10
8. Rory McIlroy, 2014 With still a little time to add to his legacy, McIlroy began his comeback late in 2013, winning the Australian Open over Adam Scott. After a few close calls, he didn't hit his stride until he called off his wedding in May, then won the BWM at Wentworth that week. The Open, the WGC-Bridgestone and the PGA Championship went his way, and he didn't rest, contending in every FedEx Cup playoff event.
Fred Vuich/Sports Illustrated
4 of 10
7. Tiger Woods, 2007 Woods won "just" one major in 2007, defending his PGA Championship, but his year edges Rory's 2014 because Tiger finished T2, T2 and T12 in the year's other three majors. He won seven times on the PGA Tour, including two WGC events and the Tour Championship against golf's best fields. Ten top-5s in 16 events meant he was in the hunt nearly every week.
Robert Beck/Sports Illustrated
5 of 10
6. Tiger Woods, 1999 Following an indifferent sophomore season in 1998, Woods lived up to every bit of the superstar promise he displayed in 1997. His 1999 season featured eight wins, among them the PGA Championship, in a stirring duel at Medinah with teenager Sergio Garcia. Thirteen top-5s in 21 events cemented his status as best in the game.
David Walberg/Sports Illustrated
6 of 10
5. Vijay Singh, 2004 At the grand old age of 41, the smooth, powerful Fijian grabbed nine PGA Tour victories, including one major, the PGA Championship, in a three-way playoff at Whistling Straits. He was a warhorse that year, with 29 starts-and a thoroughbred, too, with 14 top-5s.
Bob Martin/Sports Illustrated
7 of 10
4. Tiger Woods, 2002 Another double-major year, winning the Masters and the "People's Open," -- the U.S. Open at brutal Bethpage Black. He landed three other PGA Tour wins and showed incredible consistency -- as usual -- with 11 top-5s in 18 starts. For good measure, he landed the Deutsche Bank-SAP event in Germany on the European Tour, downing Colin Montgomerie in a playoff.
Neil Leifer/Sports Illustrated
8 of 10
3. Tiger Woods, 2005 Six PGA Tour wins, including two majors, one a thrilling Masters duel against Chris DiMarco, the other a five-shot romp at St. Andrews at the Open made 2005 another standout year.
Robert Beck/Sports Illustrated
9 of 10
2. Tiger Woods, 2006 Eight PGA Tour wins, two majors -- the British Open and PGA back-to-back -- and ten top-5s in 15 starts. And while he was collecting frequent flier miles, he also earned a European Tour win at Dubai, in a playoff over Ernie Els.
Robert Beck/Sports Illustrated
10 of 10
1. Tiger Woods, 2000 To many of golf's top observers, from media to former stars to current players, the golf that Tiger Woods produced in 2000 was the greatest of all time. He finished top-5 or better in 17 of his 20 U.S. tournaments and won nine times, including the year's final three majors. He captured the U.S. Open by 15 shots, the British Open by eight. Astonishing.