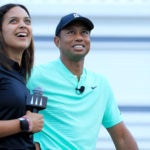 Be inclusive. Be an advocate.

In the midst of the social unrest after George Floyd’s death in police custody, Henni Zuel, a former professional golfer and current broadcaster with GolfTV, says golf has a part to play in a more inclusive society.

“If you have someone in your friendship circle who is black or in a minority group – invite them to golf!” Zuel, whose mother is Mauritian and whose father is English, said this weekend on Twitter. “Include them. Let them know that you acknowledge the biases. That golf is a wonderful game that should be enjoyed by ALL and that you will stand by them.

“So that they too can feel comfortable and enjoy the game we all love. We all need advocates, as a woman and as a mixed race woman I recognise that better than most. I urge you – Be someone’s advocate to feel included.”

At age 13, Zuel became the youngest-ever player to join the Ladies European Tour, and she played on the Tour until 2015, when injuries led her to transition to broadcasting. She said she has seen racism in the sport.

“Racism in golf may not be obvious or explicitly said, sometimes it has been but more often than not it’s in a look, a judgemental tone of voice, a question of ‘are you lost?’ Or ‘can I help you?’ At the check in that means ‘You don’t belong here,’” she tweeted.

“It unfortunately is prevelant and pervasive in its subtlety throughout the golfing world but also I have experienced the beauty of golf, the people in it and the coming together of those people and places. It is a great leveller of a sport like no other.”

Zuel said inclusion is part of the solution. If you’re looking to help, welcoming others into the sport is a way.

“This may seem minor with everything going on, but we all too often feel we can’t do anything meaningful to tip the balance,” she tweeted. “Golf saved my life, it made my life and who knows – a small action that you make might just bring joy to someone else’s life too.”