GOLF magazine and GOLF.com have a new owner. Allow us to introduce you 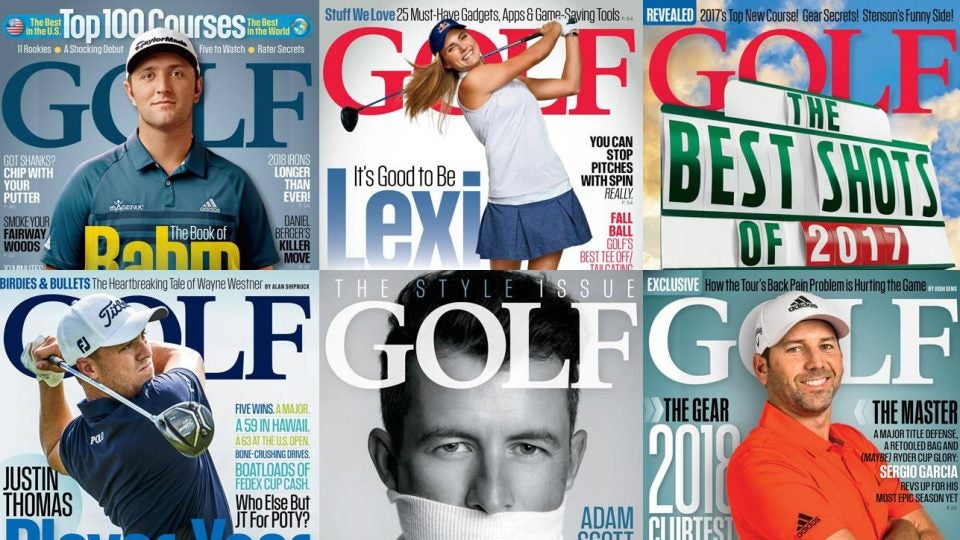 It's a new era for the GOLF properties.

We were at large last week, as per usual. I was in West Palm Beach, at a Marriott where I must have logged a hundred nights. On Tuesday I spent a couple of hours with the great man himself (J.W. Nicklaus) for a Masters preview story. (“Tiger could win any of the majors, but the Masters is his best chance, followed by the British Open — if he’s healthy.”) My longtime (22 years and counting) masthead partner Alan Shipnuck was beachside, too. (Pebble Beach for him.) Down the California coast was our resident gearhead, Mike Chawsky, who just put a bow on this year’s edition of ClubTest, GOLF magazine’s annual equipment review. Joe Passov was surely at some swank spot, as he needs to be. (My wife looks at Travelin’ Joe’s dispatches and says, “Why can’t you get that job?”) Back at the mothership, in downtown New York City, a group of trained professionals, about a dozen in all, kept the whole thing moving.

And now, perhaps you’ve read or heard, our whole thing is moving. GOLF magazine and its sister website, GOLF.com, have a new owner. For some years, these two properties had been owned by Time Inc. It was a good run but nothing lasts forever. We are proud to say that we have a new owner. So allow us to introduce to you—

Well, on the sale documents the new owner is listed as Emigrant Bank. It may not sound golfy, or personal, but it is. It’s both. If you hang out at the front door of Emigrant Bank, in the heart of Midtown Manhattan, you will occasionally see Jack Nicklaus coming or going. Or you’ll see a FedEx delivery person hauling in long rectangular boxes with Miura golf clubs in them. Or you’ll see a dapper gent of a certain age (66) with the Wall Street Journal on his tablet and the Robb Report and the newest issue of GOLF magazine in his attaché case. That man is Howard Milstein. He owns Emigrant and now he owns us.

It’s all good. We’re heading back whence we came. We’re going back to midtown, for one thing, where Time Inc. was a fixture for the better part of a century. We’re going to set up shop in the Emigrant Bank building, with a spectacular sculpture of a 9/11 firefighter near its entrance.

But beyond that, we’re going back to the essential thing that made the core Time Inc. magazines iconic parts of the American cultural landscape in the first place. And that is an owner — a publisher, in the gentle lexicon of our trade — who is committed to one thing above all else: excellence.

Howard, his son Michael and their Emigrant colleagues are always on the lookout for good business opportunities. And if those opportunities involve golf, so much the better! In 2007, Howard and Jack Nicklaus became business partners. In subsequent years, Howard (via Emigrant Bank) invested in the Japanese equipment manufacturer Miura and some techy golf companies. In the fall, when Time Inc. announced that it would be selling its two golf titles, Howard and Michael Milstein (a 6-handicap golfer) and various other Emigrants rolled up their sleeves, looked at what we were doing and won over both us and the day.

Part of it, of course, is writing a competitive check. (Terms were not disclosed.) But part of it, too, was Emigrant’s vision for us. Expand, in this age of media contraction. Our new owners believe more is more and better is better. In time you’ll see enhancements to the magazine, and the website will have a cleaner look. You’ll find more original content in our channels, in our game stories, profiles, interviews, travel stories, videos and rubrics not yet invented. We also intend to offer you even more help in improving your game, and finding the best places to play, the best places to buy clubs, the best ways to get fitted for clubs, the best methods to get those clubs to perform under the scrutiny of your friends and frenemies.

On Wednesday afternoon, Howard talked to the staff for the first time as the new boss. He was asked what our message to the golfing public should be. He said he wants GOLF magazine and GOLF.com to be the go-to source for all your golfing needs. Full stop.

And since golf is meant to bring pleasure into our lives, coming to our magazine and website should be a distinct pleasure, too. Lord knows there’s enough acrimony elsewhere on the worldwide web, to say nothing of the worldwide world.

The Milstein family made its fortune in real estate and its philanthropy can been seen all over New York and in other places, from the Museum of Natural History on the Upper West Side to health clinics around the world. Publishing at this scale is new to the family. Howard is going to find that this business, quirky though it is, is about as much fun as you can have while sitting in front of a dancing cursor.

That’s because golf and covering golf, as all my colleagues will tell you, is really more than a job. It makes us part of the culture of game. GOLF has been a spoke of the game since its founding in 1959. Here’s to the next LIX.

Our staff get-togethers, formal and otherwise, are sometimes held on golf courses, in New York restaurants with man-sized portions, at rented McMansions on the outskirts of Augusta. (We fly coach.) We address some serious issues in our reporting — cheating, drug-testing, racism, sexism, young-athlete burnout — but we never forget that golf is fun and that reading about it and working in it should be, too. Howard gets that. The first time I met him was on a course.

It is true that we are now working for Howard Milstein, and that’s the news we’re sharing here. But viewed another way, nothing has changed. We work for you.