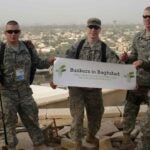 With some help from the golf industry, Bunkers in Baghdad has officially donated 1 million golf clubs.

What’s the value of a good deed?

For David Feherty, it was the ability to brighten somebody else’s day. That was what sent him on a service trip to Iraq and Kuwait in the late 2000s — a trip that allowed him to engage, to entertain, and to bring a slice of home to the servicemen and women fighting for freedom abroad.

But that’s the funny thing about good deeds — they rarely end where they begin. When he returned, Feherty wrote about his experience for GOLF Magazine, and included in his story a small aside about one of his trip’s great surprises: the troops he’d seen were golf fanatics, often hitting balls in makeshift hitting bays during their free time.

Back home in Buffalo, N.Y., the story found its way into the hands of Joe Hanna, an attorney and golf superfan. As Hanna told me when I first spoke to him last summer, as he read the story, the lightbulb popped on.

“After I read that article, I said, the least I can do is collect some golf balls and clubs and ship them overseas,” Hanna told GOLF.com. “That’s where the idea came from.”

A short while later, Hanna formed Bunkers in Baghdad, a charity focused on providing golf balls and clubs (among other resources) to servicemen and women stationed all over the world. For years now, Bunkers in Baghdad has been quietly coalescing the golf world around its cause — an effort spearheaded by its national partnership with Callaway. As for getting the equipment into the arms of servicemembers stationed around the world, Hanna recruits children from more than 800 schools in 48 states for help. Students are the bedrock of the organization, helping to create packages (many with handwritten notes) that are later shipped to the farthest reaches of the world.

“Not only are we instilling in these young men and women the importance of giving back, we’re sending a reminder of home to our troops,” Hanna said. “Sometimes they’re more appreciative when they get the letters from the students than they are for the golf clubs.”

The charity has traveled to U.S. military outposts throughout the world largely by word of mouth, and evidently, word spreads quickly. To date, Bunkers in Baghdad has donated more than 11 million golf balls and more than $1 million in related golf equipment. Last Thursday, on Veterans Day, the charity announced the donation of its 1 millionth golf club.

Beyond schoolchildren and volunteers, the charity has spread steadily into the highest echelons of the sport, receiving financial support from three U.S. Presidents, Jack Nicklaus, Arnold Palmer and Raymond Floyd, among very many others.

Hanna says he receives requests for new equipment daily, both from troops stationed at home and abroad. Callaway is largely to thank for fulfilling those orders, helping to provide Bunkers in Baghdad with much of its equipment for donations. But so too is Feherty, whose original trip more than a decade ago has resulted in one of the largest (and most benevolent) golf outreach campaigns in years.

“I’ve never been accused of being terribly smart, but it’s a very simple concept,” Hanna said. “We’ve introduced the game of golf to thousands and thousands of people around the world.”

So, what’s the value of a good deed?

Perhaps a better question would be: what about a million of them?