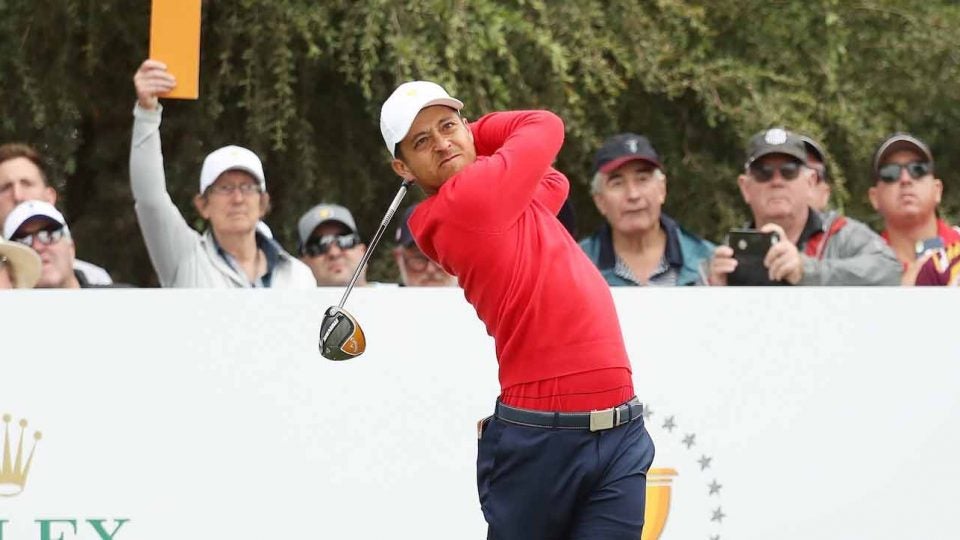 With the dust having settled on a memorable U.S. comeback victory at the 2019 Presidents Cup, it’s time to take stock of the equipment storylines that played a role during the matches at Royal Melbourne.

The final few months of each year offers gear nuts a sneak peek at equipment coming down the pipeline. More often than not, the big reveal is done at a PGA Tour event during the fall portion of the season where there isn’t nearly as many eyeballs on the coverage. Apparently, Xander Schauffele didn’t get the memo.

In a surprise move, Xander added Callaway’s “Mavrik” prototype driver to the bag for the Presidents Cup. After testing it out at the conclusion of the Tour Championship, and during practice rounds at Royal Melbourne, he felt comfortable enough with the driver to put in play.

Breaking in a new driver the week of a team competition always comes with some risks, but in Schauffele’s case, he managed to secure three points for the U.S., including a crucial 2-and-1 victory over Adam Scott during the final day.

As for Schauffele’s not-so-secret driver, you can expect to hear more about it very soon as Callaway prepares to launch its 2020 product line. Thanks to Xander, we don’t have to wait until January to get our first peek at the color scheme and design.

Driver loft is far from the sexiest equipment topic — unless you happen to be Bryson DeChambeau and wield a Cobra King SpeedZone with 4.8 degrees of loft. Arguably the wildest equipment story of the week, DeChambeau took a page from the long drive tour and opted for a driver with sub-5 degrees of loft in an effort to maintain optimal launch numbers as his club head speed (and shirt size) continues to grow.

According to DeChambeau, it ultimately came down to seeing too much spin with his previous driver. The 5-time Tour winner noticed roughly 3,000 rpm’s of spin on mishits and around 2,300 on center face strikes. With the lower loft, he was seeing mishits that were much more manageable in the launch and spin department.

Max Homa is a social media savant who also happens to moonlight as a PGA Tour winner in his spare time. During the Presidents Cup, he dropped an opinion that used to come into play during the foursomes format of the biennial matches, where players are sometimes required to play with a different ball than they’re accustomed to using in competition.

100% makes a difference and definitely plays part in partnerships https://t.co/1TSrmPyMcP

Only this year was different for Tiger’s team. Instead of pairing players using Titleist Pro V1x, Callaway Chrome Soft X or Bridgestone Tour B together, Woods threw conventional wisdom out the window and refrained from pairing anyone together who used the same ball. The closest Woods came to matching up balls was Patrick Reed (Titleist Pro V1 Left Dot) and Webb Simpson (Pro V1x).

Woods’ pairings won four of the nine foursomes matches, which isn’t too terrible when you consider the victors only pocketed two points (from a possible nine) during the four-ball format where players use their own ball. Maybe pairing based on a ball isn’t that big of a deal after all.

For years, Hideki Matsuyama was the putter king on the PGA Tour. It was commonplace, and still is to some extent, to see Matsuyama with 5-6 putters in the bag at each event. But his days of ruling the putter realm could be coming to an end.

Dustin Johnson is making a run at the crown with an arsenal of putters that would make Hideki jealous. He upped the stakes at the Presidents Cup by using two putters in four days, including a TP Juno on Sunday.

According to Butch, DJ is already in midseason form: "DJ brought out 10 putters 30 minutes before we teed off. He fooled around with the one he picked and putted beautifully."

Johnson started the week with his usual TaylorMade Spider Black but apparently didn’t like the way things were going on the greens. Instead of sticking it out with the mallet during his singles match against Haotong Li, he chose to replace it with an Anser-style blade. In typical DJ fashion, he went on to win the match, 4-and-3.

Speaking of DJ, he had something new in play during an early week practice round. TaylorMade’s patriotic TP5x Pix — the TP5x version isn’t available at retail — is a fun play on the original version that was released earlier this year. The visual technology makes it possible to pick up side spin on wedge shots and putts.

Only a practice round but Dustin Johnson was photographed using TaylorMade TP5 Pix. pic.twitter.com/NWrIFPIzlk

Considering the graphics on the cover are markedly different from the standard TP5x ball Johnson usually plays, it should come as no surprise he used it to generate buzz on social media before reverting back to his preferred pellet when the matches counted.