‘Now that’s a shot!’: The five best golf scenes from “The Sopranos” 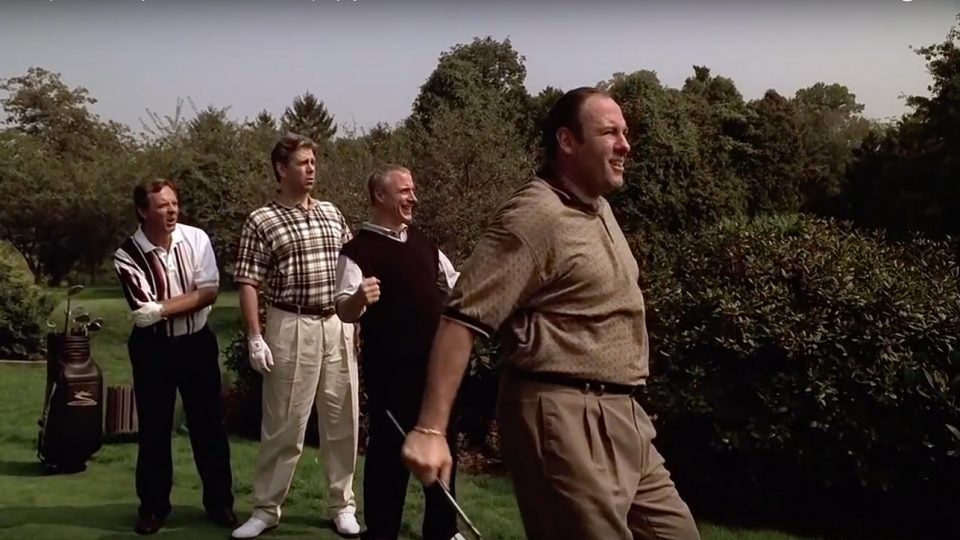 Tony Soprano was an avid golfer throughout the entire series.

“The Sopranos” has become one of the most beloved TV shows of all-time, as the crime drama portraying Tony Soprano and his mob organization in New Jersey ran for six seasons from 1999-2007 on HBO. When Tony and the gang weren’t hanging out at Satriale’s Pork Store or the Bada Bing, they were often seen conducting business on the golf course. Some of the show’s most iconic scenes took place while the cast was teeing it up. In honor of the show’s 20th anniversary, here are the five best golf scenes from the series.

1. NSFW: Tony makes fun of Uncle Junior for his “secret” during a round of golf

Tony and his Uncle Junior are the definition of a love-hate relationship throughout the series, as the two constantly struggle to balance their deep-rooted love and respect for each other with their competitive desire to rule the family’s operations. But on this day out on the course, Tony had the upper hand on Junior. While teeing off, Tony makes fun of a “secret” that Junior is hoping the other guys don’t find out about. Too bad for Junior; Tony intends to let the whole gang know. The context of the secret is NSFW, so we recommend you sit down and watch “Boca,” which is the ninth episode in the first season to understand why Junior is so embarrassed.

When Uncle Junior is suffering from cancer and his doctor won’t answer any of his phone calls with regard to his treatment, Tony and Furio decide to confront Junior’s doctor during his round of golf. While Dr. Kennedy is getting ready to hit a shot, Tony and Furio appear out of nowhere on a golf cart and drive up right next to him. The duo intimidate Kennedy into answering Junior’s calls by offering his doctor a brand new driver and backpedaling him into a nearby pond. The friendly reminder works, as Kennedy is more helpful to Junior and his questions about his cancer treatment after the visit.

3. NSFW: Tony gets invited to play golf with Dr. Cusamano and his friends at Cusamano’s country club

Tony’s next door neighbor and family physician, Dr. Cusamano, invites him to play golf at his country club with his friends. But throughout the round, the group pesters Tony with questions about John Gotti, The Godfather, Al Capone, and his mafia lifestyle. Tony gets frustrated and quickly discovers that he was only invited by Cusamano to entertain his buddies and tell mob stories. Tony later gets back at Cusamano for the stunt by asking him to hold on to a box for an unspecified amount of time. Though it’s really a box full of sand, the episode ends with a worried Cusamano, who believes the box is potentially filled with drugs or weapons.

We all have that golf partner who overthinks his or her short game and slows down the group on the putting green. Enter Artie Bucco, one of Tony’s best friends and owner of the restaurant Vesuvio — a frequent hangout for Tony and his gang. During a round of golf, Artie’s nervousness and lack of confidence over a short putt slows up his round with Tony. Standing behind Bucco, Tony begins to get extremely frustrated and impatient with Bucco’s hesitancy to take his putt. After Artie’s putt breaks too far to the right of the hole, a golfer in another group sees Tony and comes up to him. However, Tony’s greeting to the man is not so friendly.

5. NSFW: Tony has a panic attack on the tee box

One of the most important storylines in The Sopranos is Tony’s battle to control his panic attacks, the first of which occurs in the series’ premiere. Tony’s panic attacks tend to arrive at inopportune moments, like the one below, which comes on during a round of golf with fellow crime boss Johnny Sack. After he tees off, Tony begins to feel weird before fainting at the tee box. The scene might not generate the same laughs as others will, but it’s provides an important window into Tony’s emotional complexity.