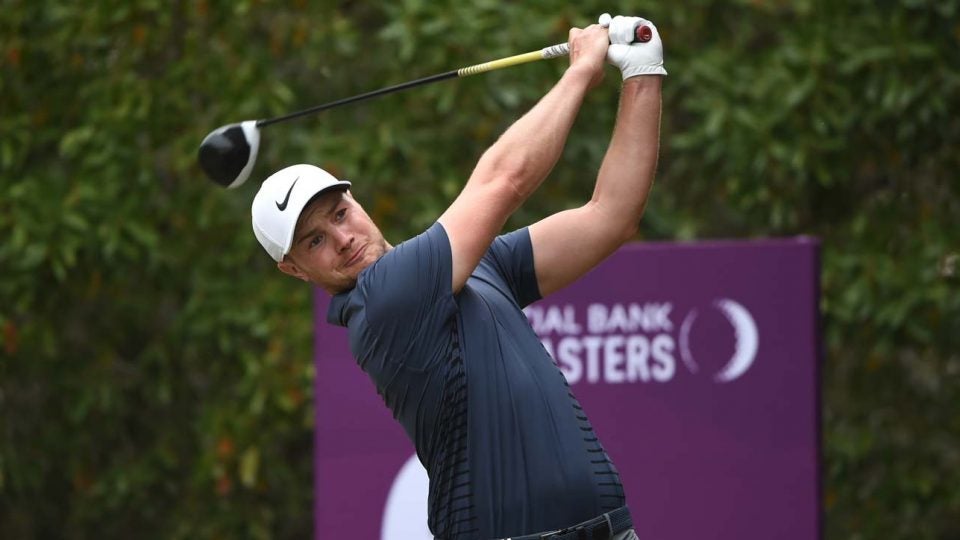 Oliver Fisher tees off on the 6th hole during the third round of the Commercial Bank Qatar Masters.

DOHA, Qatar (AP) – Oliver Fisher birdied his last four holes in the Qatar Masters third round to share the lead at Doha Golf Club on Saturday.

The 29-year-old Englishman shot a 7-under 65 for an overall 16-under 200. Eddie Pepperell (66) picked up shots on the 16th and 18th to catch his compatriot and the pair enjoy a two-shot lead over American Sean Crocker (67) in third.

David Horsey (65) was the biggest mover of the day with the Englishman improving 31 places for a share of fourth place at 12 under with, among others, Frenchman Gregory Havret and Italian Andrea Pavan.

Like Pepperell, Fisher also had just one bogey to show on his card, also on the 12th hole.

“I gave myself some chances coming in and thankfully I made them,” said Fisher, who has dropped to 369th in the world rankings.

“You can quite easily make a few bogeys without doing that much wrong here, so it’s important to be patient and keep giving yourself chances.”

Pepperell, ranked 154th in the world after a strong finish to his 2017 season, has been a picture of consistency in the tournament. He was once again rock-solid throughout the day, except one bad hole – the par-4 12th. His approach shot came up short and landed in the rocks, the third ricocheted back off the rocks, and he duffed his fourth shot to stay in the waste area.

But just when a double bogey or worse looked imminent, Pepperell holed his fifth shot for what was a remarkable bogey. And he celebrated that escape with a 40-feet birdie putt on the 13th.

“I maybe lost a little feeling through the turn, but I bounced back nicely and I didn’t let it bother me,” said the 27-year-old Pepperell, who hit his third shot to within four feet on the par-5 18th to join Fisher on top.

The long-hitting Crocker is playing on invites on the European Tour. He made a third eagle in three days – on the par-4 16th for the second successive round.