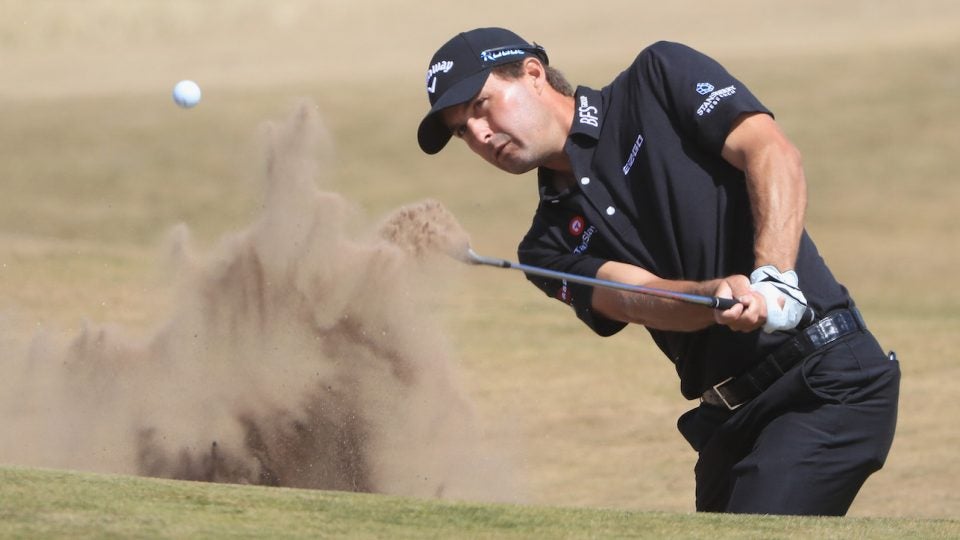 Kevin Kisner hits a bunker shot on the 17th hole during the first round of the 147th Open Championship at Carnoustie Golf Club on July 19, 2018 in Carnoustie, Scotland.
Sam Greenwood/Getty Images

CARNOUSTIE, Scotland — You should know this about Kevin Kisner of Aiken, S.C., who shot a first-round 66 here which will make him the envy of the golfing world: He works blue. For the Thursday opener, he was the man in black, head to toe, maybe preparing to see the Johnny Cash play being staged in St. Andrews on Friday night. And if you watch him from afar, you don’t ever see him do much of anything except march grimly to his ball, all-business. But he had one of his playing partners, young Marcus Kinhult, laughing hard at some of his, shall we say, observations. And Kinhult is Swedish.

“I can’t repeat what he said,” Kinhult said, “but his stories are funny.”

Kevin Kisner was the first-round leader at last year’s PGA Championship, at Quail Hollow. He was still leading after three rounds. A final-day 74 left him four back behind Justin Thomas, the winner. Here, Kisner and Thomas are in neighboring houses, along with Jason Dufner and Jordan Spieth and some other mega-talents. They’ve been spending their evenings playing soccer, although Kisner noted that the name football is apt, too, as it is played with one’s foot.

There’s a comical YouTube video going around in which an impersonator named Conor Moore captures elements of your favorite golfers, including Dustin Johnson, talking about the “foreign language you gotta learn” when playing in the Open. Kisner’s fluent. Making the 200-meter walk from the Recorders’ Holding Room (our scoring trailer) to the Media Centre (our press tent), Kisner asked an R&A official, “Where’s the buggy?” No professional golfer likes to walk when he can ride.

Kisner needed 22 putts, four or five drivers and a clutch, firm high-side four-footer on the last to get around the par-71 course in five under. What a card. Four straight early-morning pars to start, a bogey on 5 to make him wake up, an eagle on the short par 4-5 6th to get him into red, where he stayed for the rest of the day. Out in 34 and home in 32, including four straight pars on the final four holes where a lot can go wrong. Ask … anybody.[image:14182555]

At home, Kisner is a member of the Palmetto Golf Club and lives right on the course. It’s about as linksy as an inland course can be and it gets crispy and brown in the hot Southern summers.

“Palmetto is a great golf course for British Opens,” Kisner said Thursday. “It’s firm, fast and undulating around the green. That’s why I feel so comfortable here around the greens because I see the same type of shots at home.” You’ll also see shots that can run for 40 or more yards. At Carnoustie there are shots running twice that distance.

Kisner, 34, a two-time winner on Tour, said the greens are fast for Open greens and only a little slower than what he was accustomed to on typical Tour greens. In his three previous Opens — cut, near last, T-54 — Kisner never got used to the slug he had to give his putts.

“Every year I’ve come over, I’ve felt that way. I lose conscious of the line and don’t start on the line. But this week, they’re not as slow as they’ve been. [Stimping at] 10 is only a foot slower, foot and a half slower, than what we were accustomed to. So it hasn’t been that difficult in transition for me this year.” That might sound like technical mumbo-jumbo to some people, but to a guy who makes his living with his putter it means everything.

This guy sticks around. That much we know. Three more long days to go.