Feel the burn: Patrick Reed prepped differently for this Masters, and on Friday he seized control

A quick refresh: Reed, 27, is America’s ultimate Ryder Cup hero – or villain, depending on your allegiances – and in team events, he’s the big man in the locker room. But for most of his major-championship career he’s failed to strut into the spotlight.

No more. This weekend in Augusta, all eyes will be on him after he rang up a tournament-best nine birdies during a six-under 66 that propelled him to a two-shot lead. His name atop the white leaderboards after 36 holes will register as a surprise to many, but for about a month his inner circle has been set to Reed alert.

“I told him in Mexico that his golf game reminds me of when someone leaves an oven on in a house,” said his coach Kevin Kirk, who has grooved Reed’s swing since 2011. “All you have to do is light a match.”

In three events since that WGC Mexico Championship, Reed hasn’t finished outside the top 10. And on Friday in Augusta, he ignited the fuse. Teeing off in the afternoon’s final group, Reed canned a 26-foot birdie putt on the opening hole, then kicked in birdies on 2 and 3, bang-bang-bang. On a day that featured a steady breeze and tough pin positions, Reed was off and running. “To be able to get off to 3-under through three, you know, couldn’t really have built my confidence any higher than that,” he said.

As we have learned at team events, Reed is not hurting for self-assurance. “He never hits the brakes – he’s never afraid,” Kirk said. Reed poured in a 13-footer on 7, knocked a short putt on 8, and drained a 13-footer on 9. After a fairly benign start to this 82nd Masters where the field was mostly bunched and struggling, Reed birdied half the holes he played on Friday.

“Going into a day that you know birdies were going to be tough and getting off to that quick of a start, it just allowed me to feel like I can play pretty aggressive,” he said. “I feel like I’m putting well, hitting the ball solid, and with doing that, it just allowed me to get a little bit more on the offensive side rather than kind of always playing to the cautious side.”

Reed is by nature an aggressive player, a style he’s maintained throughout his life. He played his college golf down the road at Augusta State University, and this is the kind of position he once dreamed of.

“That was always something I thought about ever since I was really small. I don’t know how many times on putting greens I was like, all right, well, this putt is to win the green jacket,” he said. “To be able to sit up here after Friday and having the lead in the tournament, it’s great. But, you know, we’re only halfway.”

He’d make a popular champion. As the sun began to set on a warm, Georgia evening, fans leaned in. When Reed prepared to lag a putt on 16, one fan hollered, “Do it Patriiiick.” Reed three-putted the hole, his first of the tournament, but he had the crowd in his corner as he got home with up-and-down pars on 17 and 18. 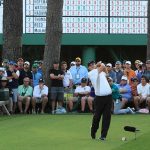 You may also like Patrick Reed leads after taxing day at Augusta, but a slew of blue-chippers are on his tail

Reed is superstitious. At several events last year, he wore his star-spangled Ryder Cup gear. Seen one way, it was an amusing homage to a great team victory and his outstanding individual performance. Through a difference lens, it vaguely resembled a college kid rolling into class in his high school letterman jacket. Perhaps time to move on.

This week, Reed has ditched the team-event gear. He also prepared differently. With his swing clicking, he arrived in town last week, and rather than killing time on mechanics, he and his coach took a deeper dive on the course itself. On Reed’s first practice day at Augusta, he spent eight hours on the course but played just four holes: 1, 2, 12 and 13. “We read the slopes, practiced at the pin positions, formed plans for different winds,” Kirk said. “In his mind, he’s ready.”

Entering the week Reed was 27 over par through four career Masters, with two missed cuts and no top-20 finishes. He currently leads the field in both birdies and putting. It’s quite a reversal. Reed said the new plan is working.

“I also feel like I’m in a better frame of my golf game and kind of mentally coming in. I feel like I’ve done all the work,” he said. “I feel like I know where I need to leave the golf ball, and most of the pins out here, and it’s now just going out here and executing the game plan and staying disciplined enough to actually stick to that game plan.”

Saturday’s forecast calls for wind and rain. Reed has prepared for just such a scenario.

A storm is coming to Augusta National. But Patrick Reed is already here.