Where Are They Now? Sammy The Squirrel 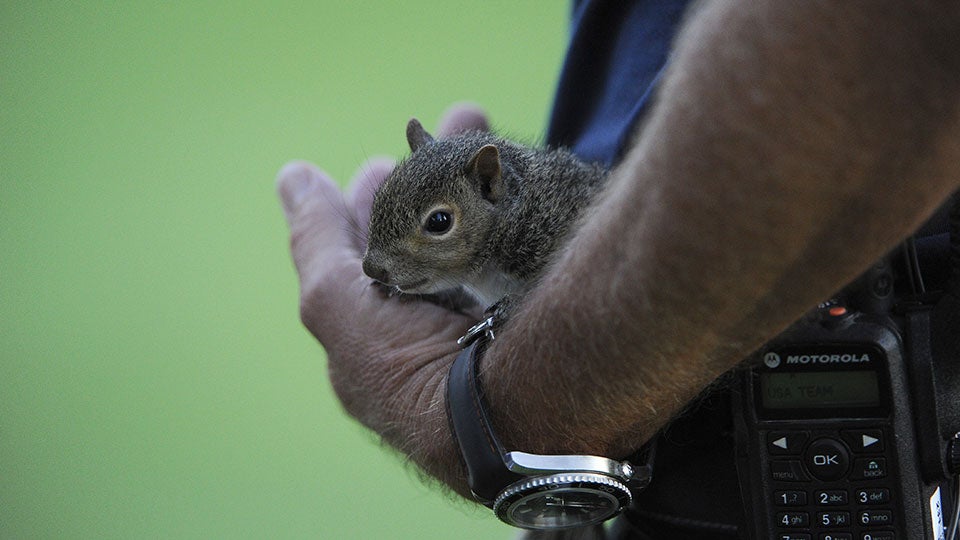 Deep into my fourth day of combing the woods along Muirfield Village Golf Club’s 2nd hole, our eyes locked: his beady and untrusting, mine twitching and bloodshot after three largely sleepless nights.

“Sammy?” I began, almost in a whisper.

“Depends who’s askin’,” came a gravelly voice. The setting sun cast a lovely glow on his twiggy lair high above Jack’s Dublin, Ohio, playground. A branch beneath my feet creaked as I craned my neck for a better view inside the nest. On one wall: a faded photo of a youthful Sammy perched on Davis Love III’s shoulder at the 2013 Presidents Cup, that magical week when the bushy-tailed critter graduated from Sciurus carolinensis to Sciurus internationalus celebritus. On a tiny side table: a framed cover of Acorn Fancy magazine, featuring Sammy in aviator shades and four adorable Gucci loafers. Cover line: One Tough Nut. That, you’ll recall, was the infamous December 2013 issue in which Sammy revealed his crippling macadamia addiction and was quoted making off-color remarks about badgers and raccoons. Sammy claimed that his quips were taken out of context. He has maintained a J.D. Squirrelenger-like existence ever since.

As I inched closer to the nest, Sammy’s eyes never left me. He flicked his tail and emitted a kuk-ing sound, which is how gray squirrels alert their brethren of threats. Which, of course, I was not. I just wanted a quote.

I reached into my knapsack and extended a peace offering, a box of my grandmother’s famous peanut brittle.

Out came a second box. Then a third.

His head emerged. Then his tail, which looked like it hadn’t been trimmed in months. He flashed a toothy smirk as he edged along the branch toward me.

“Let me guess, you want to do a story on the great Sammy the Squirrel?”

He was now within inches of me. My heart raced. His breath reeked of macadamias. Sammy looked down at the boxes and pawed at them. Then he did something I’ll never forget. He neatly stacked the boxes one upon the other and nudged them along the knotty limb back toward his nest.

“All right,” he growled, glaring back at me. “What can I tell you?”

Confession time: None of this actually happened. I did not go to Muirfield Village. I did not trawl the woods or scale a tree. I did not go nose to nose with the world’s most celebrated squirrel this side of Rocky. No one has, it seems—at least, not since the little fella was released back into the wild after his star turn at the Presidents Cup.

A refresher: On the first day of the 2013 matches, U.S. assistant captain Davis Love III encountered a stray baby squirrel on Muirfield’s par-4 2nd hole. He offered it food and attention, and the squirrel quickly became Love’s cart  mate. Nicki Stricker, Steve’s wife, christened the critter “Sammy.” The viral moment came later in the day, by the  18th green, where Tiger Woods was intently watching the conclusion of Stricker and Jordan Spieth’s four-ball match against Ernie Els and Brendon de Jonge. Behind Woods, his then-girlfriend Lindsey Vonn removed Sammy from Love’s right front pocket and delicately placed him on Woods’s neck. The prank cracked up everyone except Woods, who appeared irritated as he tried to shrug off the rodent. NBC cameras caught it all. Sammy’s star was minted.

The next morning, with cameras still rolling, Love tried to return Sammy to his native environs with hopes that his mother would find him. When the reunion was unsuccessful, Sammy packed his bags for the Ohio Wildlife Center, a 15-minute drive east in Powell.

“It was determined that he was most likely abandoned,” Angela Latham, the center’s community engagement coordinator, said the other day. Latham said Sammy was likely just a couple of months old when he came under the hospital’s care and that despite his playful nature, he was not an unusually friendly squirrel, just a hungry one. “When young animals start approaching humans, they’re looking for food,” she said. Did he have any sense of his celebrity? Latham laughed. “Probably not.”

Sammy wintered at the center, and on May 8, 2014, he was re-released back near where Love had found him. He was old enough to care for himself, Latham said, but ultimately there’s no way of knowing how he fared. “We had no way to track him after that,” she said.

Squirrel experts say that unless there was a severe food/nut shortage at Muirfield or Sammy couldn’t find a suitable mate, it’s unlikely that he would have ventured too far beyond his original stomping grounds. He would be roughly 21 months old today and with plenty of acorns still ahead of him. (The average lifespan of a gray squirrel in the wild is about four to six years.) “There’s definitely a chance that Sammy could still be around,” said Etienne Benson, an environmental history professor at the University of Pennsylvania and author of the illuminating 2013 paper, The Urbanization of the Eastern Gray Squirrel in the United States. “But there’s also a chance that”—and here Benson paused—“you know, stuff happens.”

Muirfield Village members don’t like to consider that possibility. Though there have been no confirmed Sammy sightings since he was discharged back into the bush, the consensus at the club is that he is still enjoying his lush surrounds and quick to share the story of two remarkable days in the fall of 2013.

“I’ll be honest with you, I don’t think we know one squirrel from the other,” said Muirfield head professional Larry Dornisch. “But we like to think Sammy has adjusted to the Muirfield Village Golf Club way of life.”