Steve Williams’ Masters memories: One of the game’s ultimate caddies reflects on his days at Augusta National 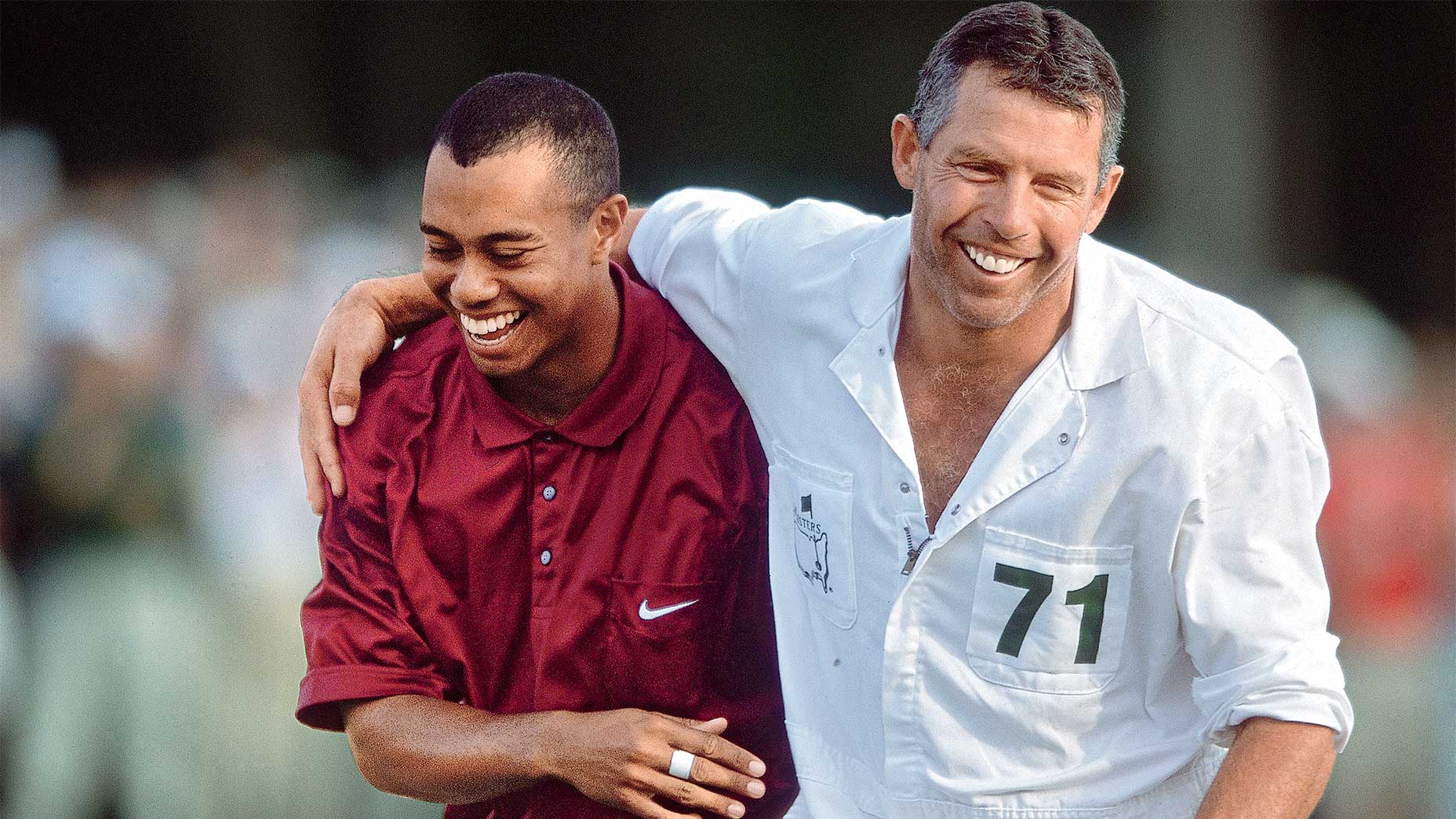 Tiger Woods and Steve Williams at the 2001 Masters.

For Steve Williams, caddying was always a job — nothing more, nothing less.

This was true from the New Zealander’s very first loop as a child in the late 1960s, when he carried his father’s clubs around the Paraparaumu Beach links course, outside Wellington, for a base rate of two dollars. “It was how I earned pocket money,” Williams wrote in his 2015 autobiography Out of the Rough.

Even when the imposing Kiwi marched down the 18th fairway at St. Andrews during the final hole of the 2000 Open Championship, as his then-boss Tiger Woods completed golf’s Career Grand Slam at its sentimental home, there was a business-as-usual demeanor about Williams — only the bag was a bit heavier and the job worth a lot more pocket money.

But like all jobs, the career of a caddie comes to an end at some point. For Williams it was in 2017, when even part-time looping for Australia’s Adam Scott — who was looking for a full-time bagman — wasn’t working for him anymore. Williams, though, isn’t a golf tragedy, and his transition to retirement has been smoother than most. Maybe that’s what happens when 12 of your 40 years in the game were spent on the bag of arguably golf’s greatest player in the prime of his career.

Still, Williams isn’t one to look back. He doesn’t get misty-eyed when anniversaries come around, like the one this year: the two-decade mark since Woods’ historic 2000 season. Williams isn’t one to look too far forward, either. He’s not counting the days until this month’s rescheduled 2020 Masters. The now-56-year-old retiree is content to stay in the present. From there, it’s easier to help his teenage son, Jett, excel as a competitive high-school rower on the North Shore of Auckland, where they now live. But when Williams does cast his mind back to golf, it’s quite a walk down memory lane.

The Old Course at St. Andrews is “a caddie’s course,” Williams says. With its ever-changing climate and conditions, it demands more from a caddie than any other 18 holes in the world. So at the 2000 Open Championship, Williams rose at 3:30 each morning to be on the links by 4 a.m. for a scouting report. In winning that tournament, Woods, 24 at the time, became only the fifth golfer to complete the Career Grand Slam — and the youngest to do it, too, beating Jack Nicklaus to the milestone by two years.

“It was an incredible year,” Williams recalls. “The stars aligned. When you win a U.S. Open at Pebble Beach” — which Woods did in 2000, by a record 15 strokes — “and an Open at St. Andrews, it’s an accomplishment that stands the test of time. Completing the Career Grand Slam at that age, in such dominant fashion, is one of the most remarkable things anyone has ever achieved in sport.”

For Williams, the only feat more memorable in his time with Woods — which yielded 13 major wins — was the wrapping up of the Tiger Slam the following spring, when Woods added the 2001 Masters to his string of consecutive major victories, after wins at the 2000 U.S. Open, Open Championship and PGA Championship at Valhalla. “It’d be hard to go past Tiger capturing the Masters in 2001,” Williams says. “He is the only player in history to hold all four major championship trophies at one time. Whether you call it the Tiger Slam or the Grand Slam doesn’t matter to me. I don’t think it’s something any player will ever accomplish again.”

Williams has witnessed his share of phenomenal golf — and phenomenal players. Before his 12-year tenure with Woods (1999 to 2011), he spent a decade with four-time major winner Ray Floyd and a bittersweet seven years before that with two-time major winner Greg Norman, who sacked Williams in 1989 after their third heartbreaking near miss at the Masters. Surprisingly, when asked to self-assess, Williams says his greatest caddie call didn’t come in his time with Norman or Floyd or during Woods’ searing 2000 — or, for that matter, with Woods at all. That honor goes to Williams’ read, in fading light at the 2013 Masters, of Adam Scott’s birdie putt on Augusta’s 10th. Scott was on the second hole of a sudden-death playoff with Argentina’s Angel Cabrera, and holing the 12-footer would mean becoming the first Australian ever to win the Masters.

“When Adam sized up that putt, he asked me to read it, which I thought he might because it was getting dark,” Williams recalls. “He read the putt a cup outside right, and I said, ‘That’s not even close. It’s at least two and a half cups.’ He asked was I sure, and I said I was positive.”

The memory of that moment still fills Williams with pride — and a laugh. “He hit the putt with some authority, and if it hadn’t gone in, it might still be rolling now!” he says. “But as a New Zealander, I was aware that no Australian had won the Masters, and that I had been on Greg Norman’s bag when he was agonizingly close to winning at Augusta on several occasions. To be on the bag for Australia’s first win at Augusta, and for it to be Adam’s first major, was surreal. He was feeling the pressure for himself and for his country, and that was pretty damn special.”

Williams does not watch golf on TV. Never has, never will. Perhaps that’s because no broadcast can live up to the moments he’s seen in person, from feet away. The one exception was last April, when he couldn’t resist watching Woods win his first major in 11 years, and his first Masters win since 2005.

“It was very compelling,” Williams says. “It just spoke volumes of Tiger’s experience — and Augusta rewards experience better than any other major and any other golf course. It was no surprise to see Tiger break away from a packed leaderboard at the time, because in the hunt for a major there is no better player. He showed exactly what you need to do and how to avoid unforgivable mistakes in those final holes, like the safe tee shot [he hit] on No. 12.”

Because of the Covid postponement, 44-year-old Woods has had an extra seven months to enjoy his green jacket. But a lack of reps in this virus-shortened season and lingering questions about Woods’ age and fitness almost certainly soften expectations for him to contend at this welcome but inevitably weird Masters.

Williams himself has reservations about Woods at a November Masters. Cooler temps will make the course play longer, and they won’t be ideal for Tiger’s iffy back. More concerning is that Woods will be in unchartered territory at a gallery-less Augusta. He uses every fiber of the Masters experience — including the tournament’s unrivaled stresses — to his advantage. Without the thousands of patrons and their piercing, adrenaline-pumping and equally nerve-rattling roars, will players feel the pressure?

There is no player who plays better under pressure. Age is not on his side, but you’d never ever put anything past him. 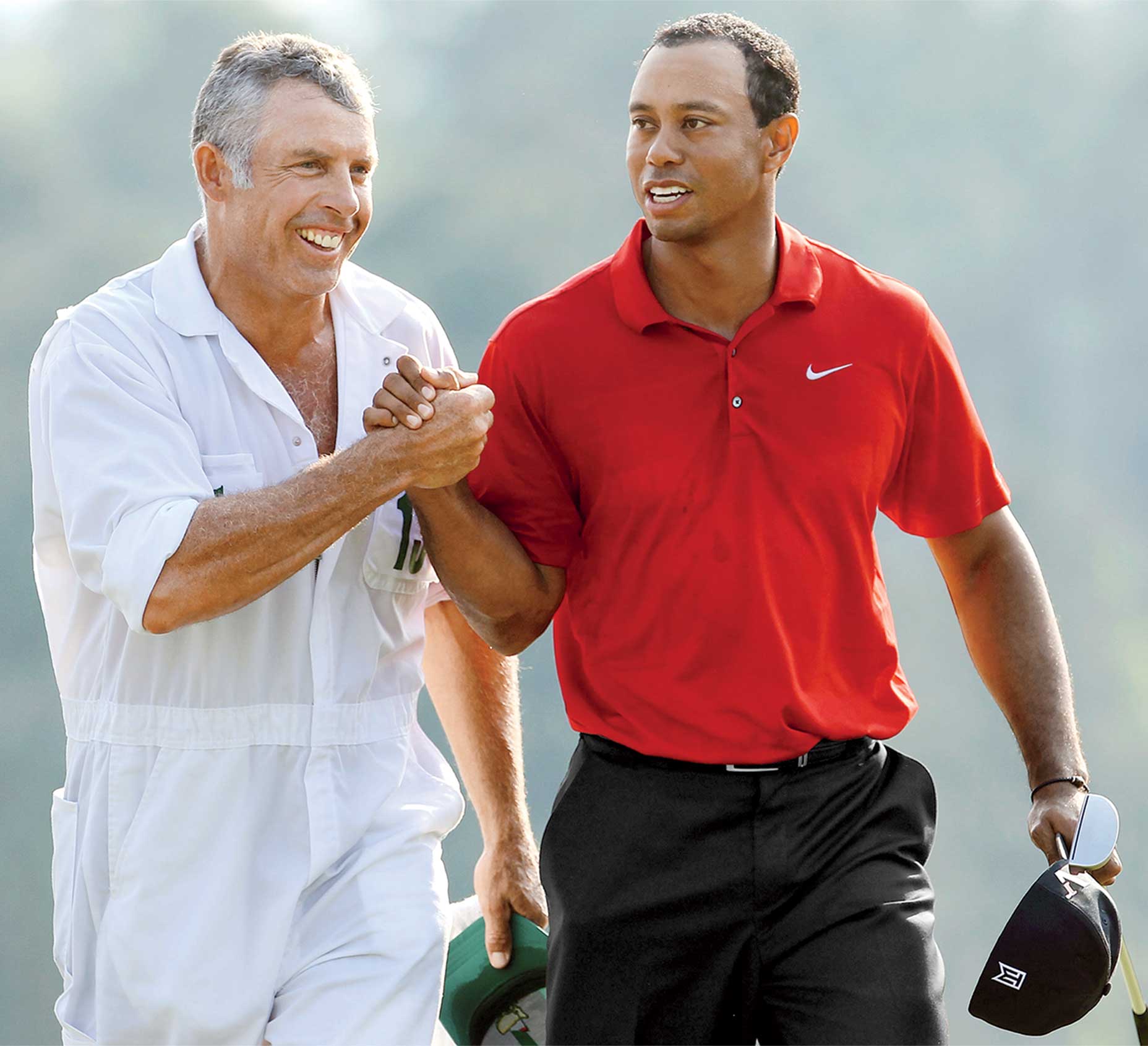 “It could be really difficult to get the competitive juices flowing,” Williams admits. “When you turn up to a major, they have a different feel from regular PGA Tour events; there is a buzz and an excitement about them. With that element missing, for someone like Tiger who hasn’t played a lot of tournament golf this year, it’ll be hard to get that spark you need. But Tiger is going to give it 110 percent.”

Better than anyone, Williams understands what it means to be both confident and measured about Woods’ chances. “Tiger is the greatest player who has ever played golf,” he says firmly for any doubters out there. “There is no player who plays better under pressure. Age is not on his side, but you’d never ever put anything past him. There’s no reason not to believe he couldn’t slip that green jacket on again. That is, if he’s fit — and that is very important. If he’s in good form, with Tiger’s knowledge and experience at Augusta, he will be near the lead on Sunday.”

No 2020 Masters narrative is better than Woods’ return to Augusta this autumn, but Rory McIlroy’s storyline comes a solid second. A green jacket has eluded the Northern Irishman since 2011, when the then-21-year-old blew a four-shot, 54-hole lead with a devastating, final-round 80. He owns a U.S. Open win (2011), an Open Championship (2014) and two PGA titles (2012, 2014). A Masters victory would secure his Career Grand Slam and put him in elite company with Woods, Nicklaus, Gene Sarazen, Ben Hogan and Gary Player. Williams, a longtime admirer, believes he can do it.

“There’s no doubt Rory is the greatest of the modern players after Tiger,” he says. “If there was ever someone I think who could join that club, it’s him.”

So, it’s either Rory or Tiger for the win?

“I don’t know,” Williams says, “but I would not be surprised if an unheralded player or a first-timer won. A big part of winning a major championship is being able to handle the pressure that the galleries bring down the stretch. Without that, it lets in guys who may otherwise struggle in that pressure cooker. At Augusta, you hear those roars across the course and you know who they are for; it’s a different sound.”

This year’s Masters will sound different. And look different, too. Even so, Williams won’t be watching — unless you-know-who is in the hunt.