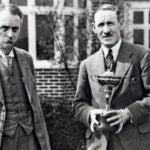 Sam Ryder (left) with his instructor, pro Abe Mitchell, whose likeness was used for the Ryder Cup.

When Samuel Ryder turned 50, he didn’t join the senior tour because there was no senior tour, or any other organized professional tour, this being 1908. No, the Englishman picked up golf in middle age not for a long-repressed passion for the sport but rather for his health, to get some fresh air and exercise, as his friend, a preacher and golf enthusiast, had suggested.

Financing his new hobby wasn’t a problem. Though Ryder grew up without great means, he’d found his way into prosperity. One of eight children of a gardener father and a dressmaker mother, he was on course to become a teacher — he’d even taught Sunday school as a youth — but ill health led him to drop out of college before graduating. This proved fortuitous, at least financially, as did having a falling out with his dad. In combination, these events led him to move to London to join a seed merchant firm and then to start his own company in St. Albans selling mail order “penny packets” of seed, at one cent each, from his house. Make a fortune from the comfort of home: Ryder was ahead of his time.

By age 50, Ryder had also risen from town councilman to mayor of St. Albans, and all that politicking on top of his business duties may have contributed to this latest bout of infirmity. Regardless, golf worked out wonderfully for both the man and the game. Ryder quickly became a single-digit handicap and must have been quite the straight shooter, as his home course, the extant Verulam GC, featured out-of-bounds on 14 of its 18 holes. Ever the leader, Ryder served on the greens committee for two decades and was also thrice the club captain, which is what can happen when you give generous donations to a place, as the philanthropic Ryder did.

The Ryder family holidayed each summer in Dorset, and it was there that Ryder had the encounter that would change the course of golf history. At Came Down GC, he met the Whitcombe brothers: Ernest (aka E.R.), Charles (C.A.) and Reg (R.A.). Ryder was agog at their skill and aghast to learn they sometimes didn’t play in big tournaments like the Open Championship because they couldn’t afford to. The seed of an idea planted itself in the seed merchant: Invest in golf to support the game itself, and talented amateurs and pros alike.

Ryder and his brother James were partners in an herbal remedy company called Heath and Heather, and under its banner in 1923 they sponsored a 36-hole medal-play invitational at Verulam for four dozen professionals. This was the first golf tournament with guaranteed prize money for all, so that at least players’ expenses were covered. Think of it as the inaugural no-cut World Golf Championship.

Ever the patriot, Ryder put the English pro Abe Mitchell on the payroll as his personal instructor in late 1925, largely to facilitate Mitchell’s own playing career, thinking him the man to challenge American dominance of the Open Championship. (Alas, Mitchell procured eight top 10s but never lifted the Claret Jug — still, that’s him atop the Ryder Cup itself.) The next year, 1926, England’s renowned Wentworth Club hosted a match between 10-man American and British teams prior to the Open Championship. While contemporaneous reports said that the competition was for the “Ryder Cup,” in fact, Ryder had held off on buying the bauble due to pre-match travel concerns about the American team because of a general strike in Britain. (Private chartered jets weren’t yet the norm.) The Brits won 13–1, with one match halved, their greatest triumph over America since the Battle of Brooklyn Heights in 1776.

In 1927, Ryder spent £250 — about $21,000 today — on a 17-inch-tall gold cup from venerable British jeweler Mappin & Webb, and the Ryder Cup was born, debuting at Worcester (Mass.) CC with a win for the Americans, the first of five straight triumphs for the host side. Samuel Ryder got to present his namesake trophy to the British captain, George Duncan, in 1929 at Moortown GC. Ten years later, Ryder died, on January 2, 1939, at the age of 77, before the inclusion of players from Northern Ireland, then Ireland, then continental Europe, before “The Concession” and “The Miracle at Medinah,” but no doubt with the sense that he had left a lasting mark on the game.