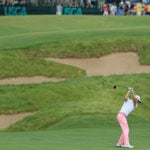 I tried (and failed) to recreate Justin Thomas' iconic 3-wood at No. 18 at Erin Hills.

There’s a plaque on the 18th fairway at Erin Hills to mark the spot where Justin Thomas did something stupid.

Not stupid like a washed-up golf writer venturing to tackle an 8,000-yard U.S. Open venue — that’s a plaque The Committee would have to consider on my behalf. Nay, Thomas’ performance on 18 was only stupid because of the way it made us mortals feel. A 667-yard monster par-5 should not be reached in two shots, period. It especially should not be reached in two shots when a player “lays back” with 3-wood off the tee. But the plaque is there and the video exists and if you make the trek to Erin Hills you should feel free to visit said plaque and picture yourself striping a 3-wood from that spot, 299 yards from the pin, and leaving yourself a four-foot putt for eagle, which you’d drain to finish off a round of 63. Here’s hoping you’ve got an active imagination.

That spot in the 18th fairway was the first of two shots that effectively encapsulated the entire experience of playing Wisconsin’s two U.S. Open venues, Erin Hills (site of the 2017 U.S. Open) and Blackwolf Run (site of the 1998 and 2012 U.S. Women’s Opens).

Thomas’ 3-wood finisher seared off the clubface and directly into golf’s history books. His putt secured a record-tying U.S. Open round of 63. If you watched his performance that day, you may remember some mixed commentary about what the shot meant. Johnny Miller — whose scoring record Thomas tied — implied that Erin Hills wasn’t a U.S. Open-worthy venue, saying it “isn’t exactly Oakmont.” Others decried the fact that Thomas could get home in two at all on such a long hole. Surely this was a sign of the ball flying too far; how could any golf course be long enough?

My in-person impression was distinctly different. I’d spent the day battling Erin Hills from the tips of the tips (just over 8,000 yards, actually slightly longer than they played that week, but more on that later) and my dogs were barking as I walked up the 18th fairway. On that day, Thomas had “a little help, left-to-right,” according to then-Fox broadcaster Paul Azinger. The wind was a little into my face now, making the uphill approach look all that much more uphill. (Colleague and Wisconsinite Sean Zak was playing a far more reasonable set of tees but had joined for the 675-yard finale, which our caddies estimated was playing 800 into the breeze.) I teed a ball up next to the plaque and pulled out driver, just to see. I rifled it towards the green. It came up well short.

Bigger picture, the shot felt representative of my experience all day. Erin Hills was a brutish test from that yardage, but it allowed — nay, demanded! — heroism from untold distances. I pulled driver into the wind on the 255-yard par-3 6th. I hit driver off the tee on the next hole, a beefy par-5, and then hit driver again from the fairway in an effort to get home. On No. 8, a par-4, I ripped driver straight into the wind, only to leave myself with driver — again — off the deck for my second. Five full swings in a row, all with the big stick.

The vastness of Erin’s 652-acre property encourages swinging away, as do the wide fairways and (relatively) playable greensides. It’s a massive, inviting expanse of Midwest farmland with a dash of Irish linksland mixed in. Swing away you must. Just don’t expect 63.

After a night spent dining, putting (under the lights!) and lodging at Erin Hills, we set off for Kohler, some 70 minutes away. There’s a ton of good golf in Kohler, and while Whistling Straits is the site of the next Ryder Cup, it’s Blackwolf Run that has served as host for two U.S. Women’s Opens. Blackwolf is the sister course to nearby Whistling Straits, but looks and feels completely different — not to mention an entire universe away from Erin Hills. Sightlines changed; they tightened. Finesse and imagination replaced brawn and bravery.

That’s not to say Blackwolf wasn’t a brute in its own right. The two most iconic images from the 1998 event came from the 18th hole. The first was the trio of Jane Geddes, Meg Mallon and Nancy Lopez waving their towels as white flags of surrender as they finished up their second rounds on Friday.

The second was Se Ri Pak standing knee-deep in the water left of the fairway on No. 18. Pak and amateur Jenny Chuasiriporn had finished regulation tied atop the leaderboard at six-over 290. On the 18th hole of the Monday playoff, Pak would chop the ball out from her stance in the water and go on to win the event with a birdie putt two holes later.

The moment that did it for me came standing on the 5th tee at Blackwolf Run. (That’s the 5th tee of the original championship course, which was used for the 2012 U.S. Women’s Open, although No. 5 now more commonly plays as No. 14 on the Meadow Valleys course.) It’s a par-4 and plays like one of the shorter holes from the back tees at 423 yards. But the way it presents is particularly special.

The 5th fairway stretches out in front of you from the tee. It’s an uncomfortable shot. Your landing area isn’t quite visible and a line of trees guards the left side an ambiguous distance away. But from the tee your gaze is drawn to the right instead, where the Sheboygan River runs along the entirety of the hole. Follow the river with your eyes and you’ll see the ultimate target: The green! It’s framed neatly by a gap in the trees. So the target is to the right, but the only way to get there is around to the left. What a riddle!

How to get there? Forget entirely about the green and fire a tee shot down the fairway to your left. If it’s driver, your target will tighten, but if you lay back you risk a lengthy approach into a green surrounded by the aforementioned Sheboygan.

“CAUTION,” the signs read around the green. “SEVERE DROP OFF.” No kidding. The Sheboygan is nice to look at, but your round will be decidedly improved by keeping your ball (and your two feet) on dry land. The latter, at least, should be inside your control.

We made a video showcasing our time playing Wisconsin’s U.S. Open duo. Enjoy, below.