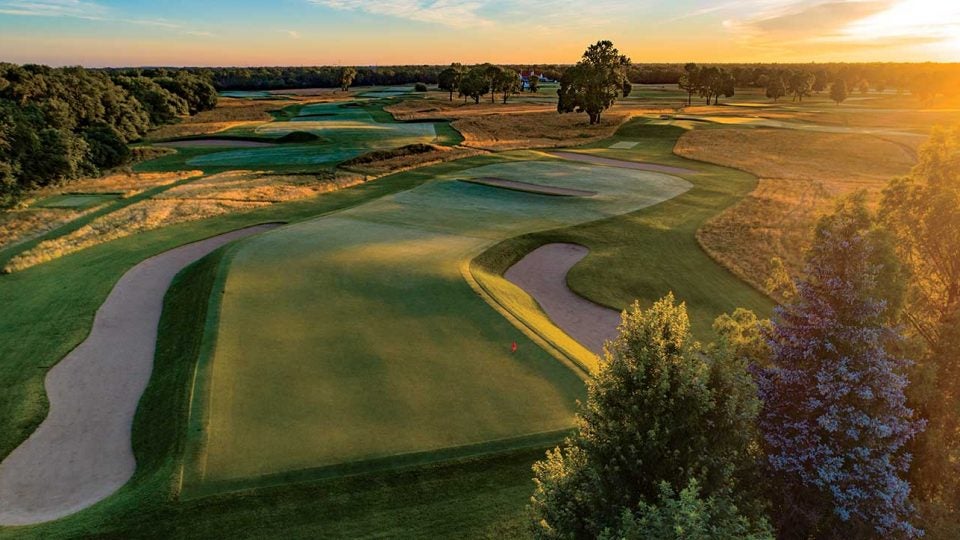 A precise long-iron shot is required to score well on a Redan design like Chicago GC's 7th hole.
Andy Johnson

Course design, like fine wine, impacts our palates differently — not every track will be as savory to you as it might be to someone who passionately studies and rates architecture. Of course, that doesn’t mean an enthusiast’s opinion — whether it be of a vintage Bordeaux or a C. B. Macdonald design — is more valid than yours. Even experts disagree continually about what constitutes greatness. But the challenge can be following what these guys are even talking about. No worries. A baseline understanding of the principles behind golf’s iconic “template” holes can refine your design taste buds and enhance your enjoyment of the courses you play. Start with the five listed here. Once you know them, you’ll recognize them everywhere — and savor every last drop. 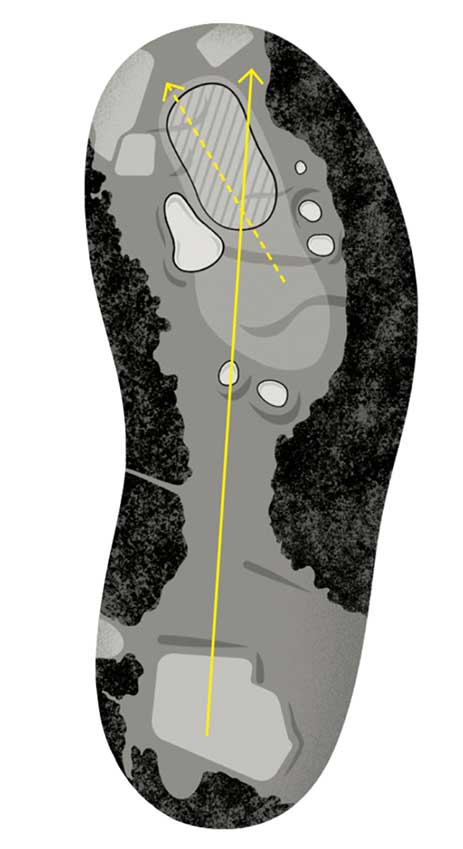 The redan design is one of the pillars golf course design, requiring precision and skill.
Ben Mounsey-Wood

Design aficionados contend that the Redan is the most copied par 3 in golf. It first appeared at North Berwick (No. 37 on GOLF’s Top 100 Courses in the World list) in Scotland, arriving in the U.S. in 1911 as one of C.B. Macdonald’s “ideal” holes at National Golf Links of America (No. 5). Macdonald, along with protégés Seth Raynor and Charles Banks, employed the Redan concept extensively throughout their careers.

The Redan’s intent is to test long-iron ability. (It typically measures 170 to 200 yards.) Its key feature is its green, perched at a right-to-left angle to the line of flight and falling away from the player standing on the tee with a right-to-left canter. The opening to the green is often protected by a false front, yet most Redans allow for a low, running shot. The design emphasizes precision — if you aren’t able to carve a draw to take advantage of the slope when the pin is back left, good luck. Keep your eyes peeled for reverse Redans, which mirror the characteristics of the original but with everything angling from left-to-right.

Notable examples: The 15th at North Berwick; the 4th at National Golf Links of America; the 2nd at Somerset Hills (No. 42); the 11th at CC of Charleston 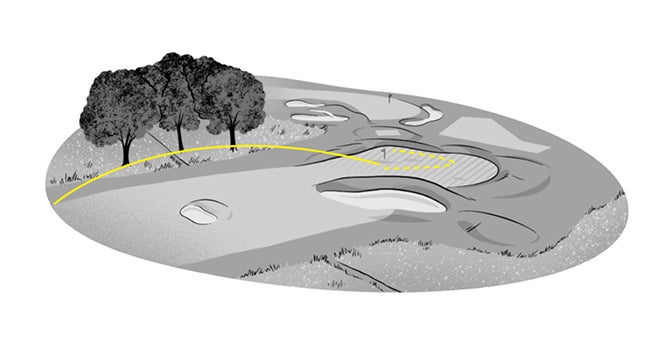 Punchbowl designs are a unique mix of intimidating and approachable, with Sleepy Hollow G.C.'s recently renovated 16th serving as a good example of the risk-reward.
Ben Mounsey-Wood

Few things in course design are more polarizing than a blind shot. Some players believe that if they can’t see the target, the task is unduly unfair. Since architects aren’t always demonic and twisted, especially those of the Golden Age (1910s to 1930s, roughly), they frequently soften blind shots by pairing them with Punchbowl greens.

As the name suggests, this green design funnels the ball toward the middle of the putting surface. A famous example of a Punchbowl can be found at the 4th at Fishers Island (No. 18). One of the most beautiful and exhilarating holes in golf, this Raynor-designed par 4 runs hard along Block Island Sound. From the fairway, golfers confront a completely blind second shot — the lone option being to hold your breath and take aim at a large flagpole that indicates the position of the green. After cresting the hill, however, players will find — perhaps with some relief — a massive Punchbowl green. Locating where your ball has finally come to rest after rolling in a Punchbowl (outside of your watch, no less) remains one of golf’s singular thrills.

The Punchbowl at the 4th on Fishers Island, however, is more than just a roller coaster. Yes, it often gathers shots toward its center, but two cleverly positioned knobs in the putting surface can knock shots out to the edges. Moreso than any green complex, Punchbowls excel at rewarding great shots and punishing those that are merely “good.” 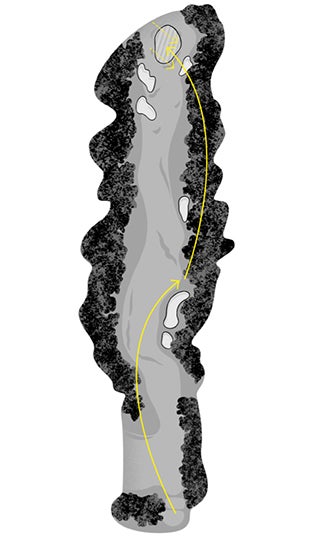 The switchback is a hallmark of Donald Ross's course designs, forcing golfers to hit good shots from a variety of angles to score well.
Ben Mounsey-Wood

Leave it to Donald Ross, America’s most prolific architect, to favor design concepts that keep golfers on their toes. One such bit of nuance is the Switchback, a par 4 or 5 that, among other things, tests the ability to work the ball in opposite directions on successive swings. A prime example is the 2nd hole at Ross’s masterpiece, Pinehurst (No. 2) (No. 16). A fade off the tee safely negotiates a waste area jutting in from the left side of the fairway. Plus, landing the ball on the right side yields a better angle into the green, which slants back-left to front-right. The ideal shot shape is flipped for the approach: A smooth draw allows use of the green’s tilt to “absorb” the ball and keep it from running off the putting surface. Fun stuff. 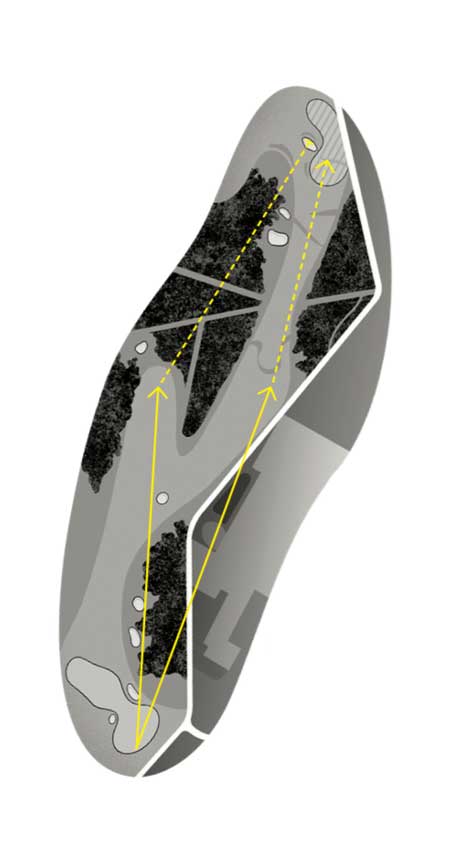 The road hole design is perhaps the most famous in all of golf, but its combination of difficulty and strategy are what separate it from a design perspective.
Ben Mounsey-Wood

When it comes to the combination of strategy and challenge, a Road hole stands unmatched. This simple design has stood the test of time and its origin, the 17th at the Old Course at St. Andrews (No. 3), is one of the most famous — if not the most famous — holes in golf.

Road holes demand plotting your strategy in reverse. Shallow greens angled from right-to-left are guarded by a pot bunker — a magnet for even slightly errant shots. Clearly, it’s far easier to avoid these hazards by playing from the right portion of the fairway, down the long axis of the green. Easier said than done: Road holes are built to make finding the correct section of the fairway extremely difficult. In the case of the original, you’re forced to flight your tee shot over the out-of-bounds stakes and the Old Course Hotel! There’s all the room in the world to the left, but every yard in that direction worsens the angle into the green and lengthens the approach. In the end, it’s simple strategy: Challenge the danger to earn an easier approach or play it safe off the tee and deal with a tougher second shot. No wonder they’re often referred to as par 4.5s — with 4 being a birdie and 6 a bogey. 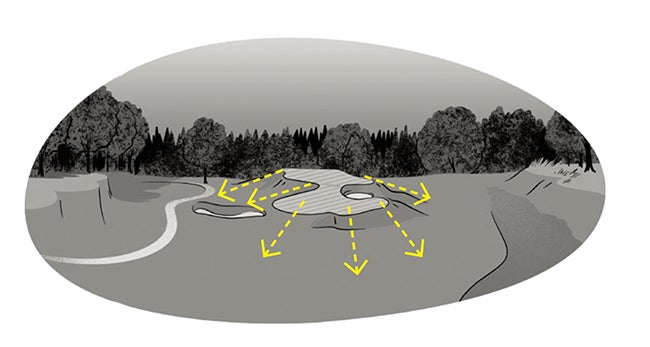 The volcano design gets its name from its appearance, but its memorableness comes from the precision it requires.
Ben Mounsey-Wood

A Volcano hole has a green complex that looks like… well, a volcano. Built up into the air on at least three sides, these greens appear to tower over players standing on the tee box. As you can imagine, even the slightest miss in any direction will repel shots to their doom. Donald Ross was a fan of Volcanoes — when done properly they make for some of the most thrilling shots you’ll attempt anywhere.

At LuLu CC, a semi-private course outside of Philadelphia, a Ross-designed Volcano remains active. On paper, this 112-yard par 3 doesn’t look like much of a test, but any miss short, long, left or right will tumble down into the surrounding quarry. The name of the game on any Volcano hole is to hit the green — or else.

Ross’s Volcanoes vary from LuLu’s diminutive example to the Country Club of Buffalo’s 186-yard 6th hole. But they’re all capable of striking fear into players’ hearts — and making you think twice about hunting a tucked pin.

Notable examples: The 6th at Roaring Gap Club; the 12th at Bald Peak Colony Club; the 15th at Pinehurst (No. 4)