The shanks flipped my worldview on its head. Here’s how I (finally) conquered them 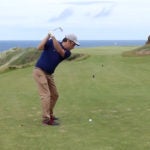 GOLF senior writer Josh Sens caught a serious case of the shanks and went to great lengths to get rid of them.

They say there are no atheists in foxholes. In my experience, the same is true on fairways.

No matter where I’ve pegged it, I’ve come across their kind. Hackers who hold faith in what they call “golf gods.” Believers in the power of “post-birdie curses.” Adherents to the gospel of “never, ever talk to someone else’s ball.”

Here’s what I believe. I believe that it’s bad luck to be superstitious. I am, in other words, a man of reason. At least, I used to be.

A few weeks ago, while playing a twilight round at my favorite muni, I had an unsettling, come-to-the-mountain moment, a traumatic experience that forever altered my worldview.

It happened in the company of someone I’ll call “Dan” to protect him from the shunning he so richly deserves. From the instant I met him on the first tee, where he was talking over the starter’s instructions, I could tell that Dan was a friendly over-sharer, one of those gabby characters who goes about his rounds like Gary McCord without the microphone.

Sure enough, as soon as we were off, Dan assumed the twin roles of color commentator (“Oh, Purina, baby! Now sit, bite, grow teeth!”) and on-course essayist, regaling me with tales of his journey through the game: born in Chicago, and raised in San Francisco, he picked up golf in college in the early ‘90s and had gotten so addicted that, after graduation, he found work as a bartender, the better to free up his days to play.

“You’ve got a nice swing to show for it,” I offered, absently.

We had reached the second tee and I was already exhausted.

“Thanks, but I dunno,” Dan said, waggling driver. “I just got through about a month of the shanks.”

Like anyone who’s been around the game a bit, I was well aware that the S-word is to golfers is what Voldemort is to Harry Potter: a term never to be uttered aloud.

But, because I wasn’t one for hocus-pocus, when Dan said “shank,” I noticed but dismissed it as just more static in his broadcast of white noise. Until the next hole, when, wielding a 9-iron from the fairway, I whacked one dead-right into the weeds.

“Shawshank Redemption!” Dan called out and chuckled. “Bro, I’m sorry. I probably never should have mentioned them.”

Was that really what had happened?

It couldn’t be, I thought, and tried to shake it off. But on the next hole, I foozled another. And another. Then two more.

On the one hand, the shanks are something mental, but you have to acknowledge that there is a physical component.

The experience was shocking, sad, surreal, shattering my firmly held convictions. I felt like the skeptic who’d scoffed at hypnotism, only to wind up clucking like a chicken. I was facing evidence of what I knew to be untrue. On we went. Dan kept talking. And I kept shanking. Finally, the indignity grew too great. On the 13th hole, I pocketed my ball and walked off the course in humiliation, cursing Dan’s existence while blaming myself for letting his blather cast a spell on me.

“Don’t worry about them,” a golf buddy replied when I texted him to tell him of my heebie-jeebies. “Next time you go out, they’ll be gone.”

But when I did, they weren’t. They were worse.

Two more rounds of hosel rockets later, and I was at my wit’s end, spiraling down, down, down into that lightless psychic pit where many golfers go, never to return. I had two choices: take up bowling, or find help.

“Ah, superstitions,” Dr. Joe Parent said over the phone from his home office in Ojai, Calif. A noted sports psychologist and author of Zen Golf: Mastering the Mental Game, Parent speaks in the calm and measured tones of a man used to talking people off of ledges.

“Where do they come from?” The question was rhetorical. “Superstitions,” Parent went on, “are myth and magic, rooted in reality.”

Never mind, he added, that the link between the two events was “temporal, not causal.” (Just because they happened at the same time doesn’t mean that one occurrence triggered the other.) In our perceptions, the boundaries blur. It’s in that hazy area between fact and fiction, where the mental and the physical grow entangled, that superstitions find a home.

No wonder they’re so rife in sports. A hockey player neglects to shave just before his team goes on a hot streak, and playoff beards become a thing. A golfer shoots a low score while wearing red on Sunday, and crimson becomes his color choice for closing rounds.

Not that the effects are all imaginary, either. Belief can confer confidence, a known performance-booster. But the influences can also work the other way around, with the mind playing cruel tricks on the body and vice versa. Which brings us back to my case of the laterals.

“On the one hand, the shanks are something mental,” Parent said. “But you have to acknowledge that there is a physical component.”

In Parent’s view, this is how I’d come down with my condition: when Dan blurted out the forbidden word, I didn’t seize upon it, but my subconscious did. Alarmed, the reptilian core of my brain kicked into action, doing everything it could to prevent my body from hitting the ball on a beeline to the right.

“At that point your instincts are telling you, You don’t want it to go right, so don’t swing out to the right,” Parent said. “So now you start swinging more outside-in, you try to keep things closer to your body, maybe you’re pulling up and out of the shot trying to make the ball go left with your body. You’re actually doing the opposite of what you should be doing and the next thing you know …”

His next phrase had a frightful, Freudian finality.

“You produce the very thing you fear the most.”

When you realize that we’re all a little crazy, superstitions start to make a lot of sense. That was the underlying theme in the best scene from “Tin Cup,” where Roy McAvoy’s caddie rids his boss of the shanks through a battery of placebo correctives: put your change in the other pocket, double-knot your left shoe, turn your hat around, etc. Combating superstition with more superstition. Talk about a tactic every golfer can relate to.

Except that during one of my post-Dan rounds, I’d tried that course of treatment, and it failed miserably. It was time to seek out a different cure.

“What happens when you shank it?” Jake Hutt asked me.

It was a sunny afternoon in San Francisco, and we were standing by the first tee at Presidio Golf Club, getting ready to play nine holes. A 32-year-old PGA instructor with a laid-back demeanor and a Tommy Fleetwood ‘do, Hutt has an active presence on Instagram, where he shows a knack for distilling complex theories into insights everyone can understand.

What happens when you shank it? This question was not rhetorical.

“Well, I’m psyched out over the ball for sure,” I said, fumbling for the right description. “And I’m definitely flinching and not staying committed and I think I’m probably …”

Hutt waved me off.

“What happens when you shank it is that you’re hitting it off the heel.” So much for the hoo-hah. Hutt was cutting to the chase. “When you think about it that way,” he said, “it’s a pretty simple fix.”

Exactly what the fix was, I wasn’t sure. But it didn’t take long to find out. By the second hole, after watching me hit three squirrelly shots, Hutt had seen enough. Standing behind me as I addressed the ball, Hutt held out a plastic noodle, parallel to my line, roughly five inches outside my hands, and told me to swing underneath it, on both my takeaway and the downswing. At impact, he wanted the clubface closed — which he had me rehearse — to get the feel. For good measure, he coated my clubface with athlete’s foot spray, so we could get a record of the impact. The goal was to get me swinging more inside-out (Dr. Parent’s hypothesis was right; I’d been coming too outside-in), and catching the ball closer to the toe. Not that Hutt wanted me to focus on all that.

“The human body is a dynamic system,” he said. “You could be thinking about 18 trillion things but that’s not going to do you a whole lot of good. We want to boil it down to one thing you can work on while clearing out all that other voodoo in your head.”

Work the club under the noodle. That’s all I had to do. I coiled, swung and hit a screaming hook.

A banana to the left was not my preferred shot shape, but I had to admit, it beat the shanks. A few more holes brought a few more small adjustments — stance slightly more closed, ball slightly farther back — and like that, my screaming hook became a lazy draw. To call my mood euphoric would be an understatement. I was back to playing something close to golf again.

Not every shot was pure. Especially not my 8-iron from the fairway on the 6th hole: shanka-potamus!

I shot Hutt a desperate look.

“Hit another,” he said. “You know how to correct it. It’s nothing you can’t fix in a single swing.”

“See,” Hutt said, when my redo set off on a sweet path for the pin. “It’s just physics and you can trust it. It’s like you had become a flat-earther. And now you believe in science again.”

He was right about that, too. I’m no longer superstitious. But I am a little stitious. It’s hard not to be. After my round with Hutt, I played a twilight 18, entirely shank-free. But I still haven’t made it back to my local muni, that hot spot of infection, where it all began. I’m a little leery. I know that danger lurks, both mental and microbial. There are reckless golfers out there, characters like Dan, spreading illness in the air, and fragile ones like me, with pre-existing conditions.

The wisest thing, I figure, is to trust in science, without discounting magic. That’s why, my next time out, I plan to wear a mask at check-in, and earplugs on the course.