Twenty years ago, Bob May took it to Tiger Woods, and it nearly ended in victory 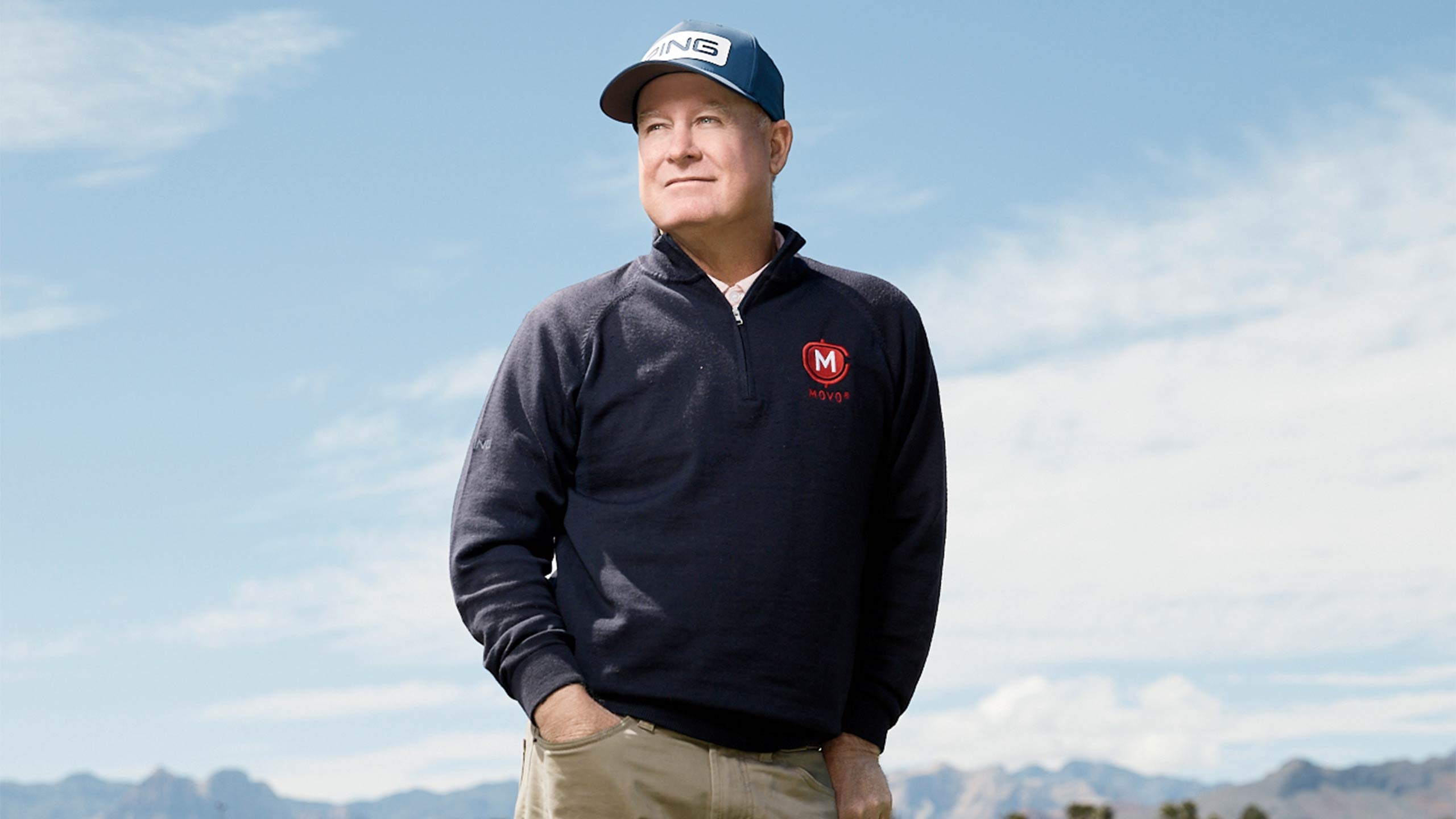 Bob May nearly took down Tiger Woods at the 2000 PGA Championship at Valhalla, and it still remains one of golf's greatest major finishes.

History is written by the winners. But sometimes runners-up have the more interesting say. Twenty years ago, at the 2000 PGA Championship at Valhalla Golf Club, Tiger Woods claimed his third of four consecutive majors in a run that became known as the Tiger Slam. Yet the story that gave full shape to Woods’ Wanamaker Trophy win was the inspired play of the guy who finished second. Expected to fall meekly to golf’s alpha at the top of his game (as so many had before), Bob May took Woods to the limit, firing a 66 to Tiger’s 67 to force a three-hole playoff that was settled in the twilight by a single shot.

In golf fan memory, May and Woods will be forever linked by that duel. But the ties between them run deeper. Seven years older, May grew up in the same area of Southern California as Woods, playing the same courses and setting junior records that Tiger held as a benchmark for himself. Even after the two shook hands at Valhalla, with their careers destined for divergent paths, their connection continued through the shared experience of injury. Beset by back problems, May, like Woods, went on to have multiple spinal surgeries, including the same fusion procedure that helped Tiger get back on track. May returned to competition after fusion, too, though, today, at 51 and lacking status on the senior circuit, he is left to Monday qualify into events.

His other working hours are spent running the Bob May Golf Academy, in Las Vegas, where he lives. GOLF sat down with May to discuss his life in the game before and after Valhalla, his competitive relationship with Woods and the details of a Sunday afternoon that the golf world can’t forget.

GOLF: So it’s the final round, and you’re in the final pairing with the man himself. How intimidated were you?

May: Honestly, I wasn’t. I knew Tiger was the most dominant golfer in the world, and I respected that. But intimidated? Not at all.

May: The biggest thing that helped me was understanding he was going to play a different course than I was. He just hit it so much farther. Some of the guys who had fallen to Tiger in the past were big hitters who tried to slug it out with him, and I think it caught up with them. That wasn’t my mindset. I told myself I was going to play my game, which I knew was good enough to go to war with.

Tiger was on the left side of the fairway, and I remember seeing him shake his head at Stevie as if to say, ‘Damn. This guy is not going away.’ Bob May

GOLF: You and Tiger grew up in the same area. Had you ever played head-to-head?

May: We were far enough apart in age that we didn’t compete directly against each other. But I heard plenty about him, of course, and he knew about me. I had a few junior records back then, and Tiger used to say he wanted to break them. At the time, I was like, “What? Why don’t you just worry about your own stuff?” But later, when he started talking about wanting to break Jack Nicklaus’ records, I came to think of it as a compliment.

GOLF: Did you two interact much that Sunday at Valhalla?

May: We were each in our own zone. And, as I expected, we were each playing a different course. On the first hole, a par 4, I hit a good drive just to the right of a tree that was about 275 yards out. When Tiger hit his drive, I thought he pulled it because it was going right at that tree. But when his ball got to that tree, it just kept on going. I wound up hitting 7-iron into that first green, and he hit sand wedge.

May: We both made par. If anything, it put me at ease because it showed me right off the bat that I was right: We were going to be playing different courses.

GOLF: You took the lead with a birdie on the second hole. Did you realize right away that you had your A game?

May: I’d always been a pretty good ball striker, and I’d been playing well all week, so my confidence was high from the start.

GOLF: Any shots from that day that you’d want to have back?

May: Maybe my drive on 18 in the playoff. But in regulation, no. I had a short putt for birdie on 15 that people ask me about. But I hit the putt I wanted. If you look at the tape, [José María] Olazábal had pretty much the same putt earlier and it broke right. That’s how I played it, but mine just didn’t dive right.

GOLF: The 15th was where Tiger missed left and made a crazy up-and-down.

May: That’s right. And I’d put my approach in there tight by drawing one out over a creek on the right to a right pin position. Tiger was on the left side of the fairway and I remember seeing him shake his head at Stevie [Williams, his caddie] as he was walking toward his ball as if to say, “Damn. This guy isn’t going away.”

GOLF: You mentioned the tape. Have you watched replays of that round?

May: I never made a point of sitting down to watch it. But we used to have a loop of it running at my academy. Some students would see it and go, “Oh, I thought I recognized your name.”

GOLF: In the playoff, Tiger’s drive on 18 seemed headed for serious trouble but wound up in play. As you’re probably aware, there are conspiracy theorists who insist that Tiger got a friendly assist from a fan.

May: Oh, I know all about the conspiracy theorists. I had a 50-gallon bucket full of letters from them over the years.

May: Things like, I saw a kid throw it out of a bush. Or I saw someone kick it back in play.

GOLF: What did you see?

May: From the tee, we couldn’t see anything. There’s a hill that blocked our view. After the round, I was up in the booth with Jim Nantz and Ken Venturi, and Venturi said, “I want you to see this.” Someone off camera tried to cut Venturi off, but he was like, “No, he needs to see this.” But even on the replay, I couldn’t tell. And to me, it doesn’t matter. Even if something did happen, it’s not like Tiger planned it. It’s water under the bridge.

GOLF: Have you ever had a chance to talk to Tiger about that day?

May: No. After the playoff he said, “Great match,” and that was about it. It was getting dark and we each got pulled in different directions for interviews. I didn’t see him again until [the Walt Disney World Golf Classic] later that year, when they paired us for the first two rounds. And then it was just like, “Oh, hey. How’ve you been?”

GOLF: Tiger might have edged you at Valhalla, but you beat him to spinal-fusion surgery.

May: In 2002, I started to have back pain, and then in 2003, at the Byron Nelson, I hit a tee shot and that was it. I was done. We found out later that my spinal nerve canal is twice as narrow as a normal man’s, so any herniation of a disk would just drive me crazy. I did nine months of rehab and tried to get back to it, but after just four days of practicing, the pain was back. I needed surgery.

GOLF: Was that the same fusion procedure that Tiger had?

May: That came later. This was a laminectomy. They basically go inside your spinal nerve canal and Roto-Rooter you. I didn’t play again for nearly three years.

GOLF: How did you feel when you finally came back?

May: If I didn’t play golf, I would have felt great. But the wear and tear — I had so much pain I couldn’t go through it anymore. I had the fusion surgery four years ago and that did the trick. To finally get rid of nerve pain and get your life back — I can’t tell you how good that feels.

May: The hardest part was always going to be getting back the confidence you lose when you play through pain. That happened to me. Tiger lost his confidence, but he was able to get it back. It’s hard to comprehend how difficult that is to do.

GOLF: How’s your own game these days?

May: If I could get out there, I believe I could stay out there. I’ve qualified a few times for tournaments, but it’s tough when you’re trying to get sponsors to give you an invite and they think a pro athlete from another sport is a better draw.

GOLF: Looking back, how would you grade your career?

May: At times it was an A, and at times it was a B or C or D. It’s hard to give an overall grade because it’s been up and down. Generally, I would say I had a decent career, but it didn’t meet my expectations. The way I played in 1999 and 2000, the way I played at Valhalla, that’s what I expected of myself and what I think others expected of me. But when I first got out on Tour, I kind of had a stumble.

GOLF: What caused that?

May: Part of it might have been trying too hard. But honestly, I think being too respectful. There were a lot of guys out there I’d always looked up to. When I came out, Mr. Nicklaus was still playing. Tom Watson. Ben Crenshaw. I grew up idolizing those guys. There were times when other players would come on to the range and I would squeeze over and make room, rather than thinking to myself, This is my area. I lost some of that cockiness. And golf is such an individual sport, you need some of that cockiness. Some of the other guys who came up with me had that swagger, and I think it helped them. One example I’ll give you is David Duval. If you knew him as a person, he was a good guy. But on the course, he wasn’t someone you wanted to mess with. He had that attitude. As he got older, I think he started to worry more about what people thought. It’s something I tell my students because I’ve learned the lesson myself: You’ve got to have that attitude because it’s man-eat-man out there.

GOLF: Do you ever play the what-if game? Like, what would your life have been like if you’d won that day at Valhalla?

May: The only thing that would be different was the financial side of things. I don’t mean to be disrespectful, but there were guys who came after me who won tournaments but who didn’t get nearly the publicity I got from finishing second. I have no regrets. That day is now stitched into the history of the game. I feel fortunate that I was part of it, and that 20 years later we’re still talking about it.