EVANS, Ga. — Alexa Pano was only 7 when she was featured in a Justin Timberlake-produced documentary called “The Short Game.”

The occasion was the 2012 U.S. Kids Golf Championship in Pinehurst, N.C., where Pano won the second of her five titles in a six-year span. It was what she said in the film, however, that foretold more than her golf acumen.

“I want to be the first woman to play in a tournament at Augusta National,” she said.

That her childhood vision actually came true is “unreal,” Pano said Tuesday. “If you told me this at 7 years old, I probably wouldn’t have believed you.”

Now 14 and ranked the No. 1 junior girl by Golfweek, Pano — already a three-time finalist and the only two-time winner in the Drive, Chip & Putt national finals at Augusta National — is the youngest player in the field for this week’s inaugural Augusta National Women’s Amateur. The 54-hole event starts Wednesday morning at Champions Retreat Golf Club. When the 36-hole cut is made Thursday afternoon, only the top 30 will compete in the final round on Saturday at the home of the Masters Tournament — although every player in the field has been invited to play a practice round at Augusta National on Friday.

Features
Alexa Pano, the youngest player in the Augusta National Women’s Amateur, is already a star

“I can’t believe that the tournament starts tomorrow and in just two days I’ll be playing at Augusta National,” said Pano, from Lake Worth, Fla. “And hopefully in three days, competing there. It just sounds so unreal.”

It’s really a new tradition unlike any other at Augusta National. When Bobby Jones and Clifford Roberts built their golf club in Augusta, Ga., in 1933, they wanted to introduce it with an event. Less than a year after opening, 72 men teed off in the inaugural Augusta National Invitation Tournament and the Masters became something major.

Eighty-five years later, new club chairman Fred Ridley decided to kick off his tenure at the helm with a splash. So in his first press conference as Masters chairman last April, Ridley announced plans to create a women’s amateur event that would finish at Augusta National Golf Club on the weekend before the Masters.

Less than a year later, 72 young women ranging in age from 14 to 24 will tee off in the inaugural ANWA just 5 miles up Washington Road at Champions Retreat.

“When I first spoke about the idea with my closest advisors at the club, after I became chairman, they almost fell off the couch,” Ridley said in a recent interview with Global Golf Post. “They liked the idea. But they also understood that the logistics of doing it so soon, and doing it the week before the Masters was going to be difficult.” 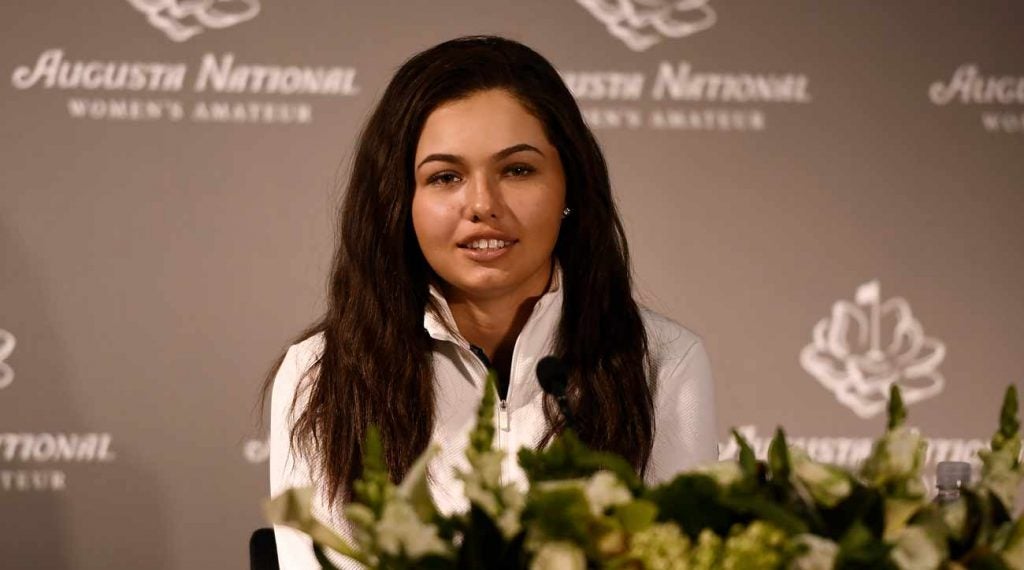 Alexis Pano is living her dream this week in Georgia.
ANWA

There’s no sign that this event was just pulled together from scratch, as no expense has been spared turning Champions Retreat into a reasonable facsimile of Augusta National for its 36-hole window to winnow the field to 30 finalists. Instead of the Masters green that blankets everything at Augusta National, Champions Retreat is covered in a fresh coat of pewter. All the signage and concessions perfectly match the paint scheme on the cabins and out buildings at the club. The concessions stands will be loaded with egg salad, pimento cheese, Masters clubs and all the “cola” ANWA patrons could want.

The event even has its own logo, with the iconic red flag and pin emerging from the center of a green and yellow magnolia blossom instead of the Georgia hole location on the U.S. map. A whole new market of merchandise will await the patrons who won the lottery to enter the exclusive grounds on Saturday.

More than anything, however, this is about the young women who get a chance to live a dream that didn’t exist for generations before them.

“It’s crazy that they’re letting us play the course,” said Jennifer Kupcho, the No. 1 ranked women’s amateur in the world who will hit the historic first tee shot at 9 a.m. Wednesday. “It will be super cool to be able to say I did that.” 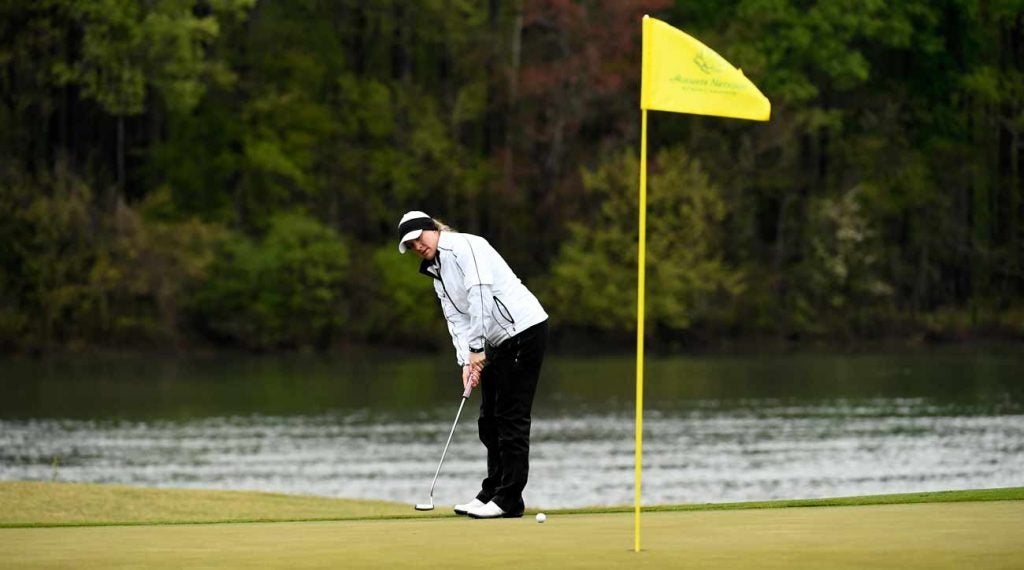 Jennifer Kupcho chips during a practice round at Champion's Retreat on Tuesday.
ANWA

Ridley — the only Masters chairman who formerly competed in the Masters as an amateur — wanted to leave his mark after his predecessor, Billy Payne, made growing the game a hallmark of his tenure. With three daughters at home, Ridley believed an amateur women’s event could further inspire a demographic beyond the Drive, Chip & Putt finals that have been staged at Augusta National on the Sunday before the Masters since 2014.

“Just imagine the 40 girls who come here each year for the Drive, Chip & Putt national finals will be able to dream about returning here one day to compete on a much grander stage for another impressive title, champion of the Augusta National Women’s Amateur,” he said.

Including Pano, who won her age groups in 2016 and ’17, there are three players in the field who originally competed in the DC&P — reduced from four after the late injury withdrawal of Lucy Li. Hanna Alberto, 20, competed in the inaugural DC&P in 2014 and Gina Kim, 18, reached the 2015 DC&P finals. Both are now playing collegiately at Sam Houston State and Duke, respectively.

Having only made it as far as the 18th green in the putting portion of the DC&P, the “graduates” don’t feel they have much advantage over the rest.

“We only got a little taste of it,” Kim said, “but we haven’t seen the full thing.”

Kupcho, who deferred taking her LPGA tour card she qualified for until after she defends her individual NCAA title with Wake Forest in June, is the biggest headliner in the field along with fellow top-10 players in the world Andrea Lee (No. 3, Stanford), South Korea’s Jiwon Jeon (No. 6, Alabama), Mexico’s Maria Fassi (No. 9, Arkansas) and Spain’s Ainhoa Olarra (No. 10, South Carolina).

While three other top-five amateur players (Patty Tavatanakit, Frida Kinhult and Albane Valenzuela) and the No. 2 junior (Rachel Heck) accepted invitations to play this week in the season’s first LPGA major the ANA Inspiration, the top-ranked women here couldn’t pass up the opportunity to be part of history.

“So this is kind of a first-time thing, and it’s really cool to be able to play in the first one ever,” Kupcho said. “And it will be my last chance to play in it, so I figured I might as well play in this.”

“It’s really hard to turn that down,” Lee said of her ANA Inspiration invitation. “But just considering that this is the first time women are having the chance to even compete at Augusta National, I felt that, you know, this is kind of a once-in-a-lifetime opportunity. I mean, unless the LPGA has a tournament here in the future … hopefully, maybe.”