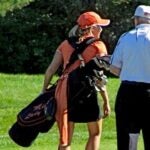 Golf is often described as a sport that can be played for a lifetime, and 99-year-old Ohio resident Don Seyfried — who turns 100 next month — is living proof.

Seyfried, a golfer with over 80 years of experience in the game, has been unselfishly sharing his knowledge with the next generation of young players as a volunteer supporting coach for the junior golf program at Arrowhead Golf Club in Minster, Ohio, for nearly 20 years, as well as serving as a volunteer assistant coach for the Minster Lady Wildcats high school golf team, alongside head coach Debbie Ahrns.

Ahrns and Seyfried are both members at Arrowhead, and Ahrns quickly noticed Seyfried’s dedication to the junior program. When she took over as head coach for the Lady Wildcats back in 2002, she knew just who to bring on to help her with the team.

Seyfried’s specialty is the short game, which he says takes about three years to effectively teach. When he’s looking for next-level intervention strategies and swing advice to share with his students, his instruction go-tos include Paul Wilson, Julius Richardson, Butch Harmon and GOLF Top 100 Teacher Kellie Stenzel.

“Don once sent me a copy of my book that he had outlined and written notes in the margins,” Stenzel recalls. “I was overwhelmed and amazed at the detail and the time he had taken to digest the information so that he could share it with his improving golfers. I wish I had Don around when I was playing junior golf.”

The coronavirus pandemic threatened to upend Seyfried’s run with the girls’ golf team, as worries over Seyfried’s age and health prompted serious consideration of retirement. After having a heart-to-heart with Seyfried, even Ahrns thought his tenure had regrettably come to an end. But lo and behold, during a recent Sunday evening session with the team, Seyfried emerged from the shadows in a golf cart, ready for practice.

“Debbie,” Ahrns recalls Seyfried saying, when she asked what he was doing there, “Life is about the quality of life you live, not the quantity. I’ve been fortunate enough to have had both. If the Lord calls me home while I’m doing something I love, like teaching young people golf, then my mission here on earth is done.”

And just like that, Seyfried was back to business: “So, what’s on the lesson plan for tonight?”

Seyfried has enjoyed a remarkable life. He got his start in golf as a teenage caddie, back when clubs were referred to as brassies, mashies and niblicks, and a caddie’s compensation for 18 holes was 35 cents and maybe a bottle of pop back in 1935. He’s a WWII veteran (U.S. Navy), a Michigan State alum, a retired engineer at Minster Machine and a founding member at Arrowhead Golf Club. He and his wife of 72 years, Margaret (who is 97), have three daughters. For Seyfried, being a part of the Lady Wildcats program was born from a desire to give girls’ golf more of the attention it deserves.

“Girls’ golf has really not gotten the best of help over the years,” Seyfried says. “Girls high school golf especially. The girls in small rural communities do not have many opportunities for good quality instruction or pre-high school playing opportunities. Girls’ golf seems to be a low priority in this area of the country and that is a shame, as these girls have a great deal of potential, talent and loyalty.

“They remember me,” Seyfried continued, “and they remember the things I told them. They call me and let me know when they get married and have babies, and talk to me over the years. They also volunteer for the junior golf program and give back what they got from the game.”

Seyfried’s contributions to the Arrowhead juniors and high school girls’ team have been invaluable, says Ahrns.

“Don breaks things down in really small steps,” Ahrns says. “He’s very deliberate about it, and doesn’t change. He sees potential in somebody and zones in on that person. It’s so fun knowing I’ll be carrying on some of what he believed in.”

The Lady Wildcats annually recognize one golfer with the “Seyfried Short Game Award,” an honor that is awarded to the golfer who has the ability to turn three shots into two, as a tribute to Seyfried and his dedication to developing the short game.

For Seyfried, simply sharing the game with the next generation is what makes all the effort worthwhile.

“The gift we give [the girls] is an appreciation of the game of golf,” Seyfried says, “and a swing they can use from now on, that will help them enjoy the game for the rest of their lives.”

You’d be hard-pressed to find someone who’s a better example of that statement than the man himself.