Masters 2019 picks: With a Vegas expert’s help, we identified this year’s surprising winner

AUGUSTA, Ga. — Writers are generally pretty good at explaining why things have happened, but far worse at predicting how they’ll unfold. Vegas betting sharps are generally the opposite; they’re invested in predicting outcomes, not storylines. So us media types may miss some valuable knowledge if we ignore the statistically-driven betting markets in the lead-up to the gamble-happy Masters.

Last year’s approach produced Patrick Reed among our final few selections; I screwed up just by not taking him. But this year we’re back and even better-prepped to serve you, using the same fundamentals we worked in a year ago — if you recognize our expert’s words, that’s why.
The goal of this process is to learn a little more about the Masters by working our way through potential bets for the week. But as anyone who has ever set foot into a casino knows, there’s only one way to have fun: winning. So let’s do our very best to make sure we do just that, too. My bosses have armed me with 200 internet dollars for the project, so let’s make the most of ’em!

Tournaments
Masters 2019: Good weather expected for first round on Thursday at Augusta National

I’ve enlisted the help of Brady Kannon, a Vegas golf vet who has covered golf gambling for several different outlets over the years and currently writes and does radio for VSiN and Point Spread Weekly, each a part of Brent Musberger’s new media company.

“What’s unique about betting The Masters is that it is not unique,” Kannon says. What he’s referring to is Augusta National, the only major championship site that remains the same year to year. That consistency is part of what enthralls us about the year’s first major every spring, and for handicappers it means there are decades of trends that can be sorted through. There have been changes to Augusta, but Kannon says it has played essentially the same since the 70s. Players that have done well have some things in common.

That leads us to this year’s big question: Who’s going to win the Masters? I asked Kannon how he’d go about picking a winner. First of all, he advised against it.

“I do often come up with a handful of guys that I like to win the tournament outright… and I may sprinkle a few pennies on some shots to win it all,” he says. “But I feel your money is better spent in focusing in on the match-ups. For me it’s easier to handicap Player A vs. Player B than guess who is going to win the event out of 150-some players.”

Well, shoot — this year it’s only 87 players, among the smallest Masters fields in years! So, we’re going to try it anyway; we can tackle Kannon’s matchups as they come. We definitely might not figure out who WILL win the Masters, but we can start with who probably WON’T, and go from there. Want to go to the 2020 Masters? Now is your chance.
Getty Images

No Masters winners over 40 since Mark O’Meara in 1998 means we can take out the guys who are like, old. Angel Cabrera. Stewart Cink. Fred Couples. Bernhard Langer. Sandy Lyle. Larry Mize. Jose Maria Olazabal. Vijay Singh. Mike Weir. Ian Woosnam. If you’re over 45 and you ain’t Phil Mickelson, you’re off the list. Though if Freddie goes on to win, I know you’ll all be cool with it.
Anyway, look at our progress! Already down to 77 players.

Apologies to Bobby Jones, who always dreamed of an amateur champion, but no ams have finished in the top 10 for over 50 years — this still won’t be the year for Jones’ wish. Viktor Hovland is a stud, but he won’t win. Nor will Devon Bling, Takumi Kanaya, Kevin O’Connell, Alvaro Ortiz, or Jovan Rebula. Just like that, 71 players remaining.

Danny Willett? He’s been better of late, but not Masters-win better. Trevor Immelman? Nah. The Masters graciously extends invites for life to former champions, but these two aren’t in proper form.
Let’s throw in some other major winners who are exempt but aren’t in full form: Jimmy Walker doesn’t have a top 25 since before last year’s U.S. Open. Martin Kaymer has been meh, too. 67 players remain.

“A lot of what has been true here for 30-40 years is still true today,” Kannon says. “For example, first-timers don’t win. Fuzzy Zoeller was the last to do it 40 years ago.” He points out that many recent winners have played Augusta six or more times before taking the title; it’s painful (and potentially risky) to eliminate Matt Wallace, Lucas Bjerregaard, Eddie Pepperell and Aaron Wise, but we’ll do it. So long, also, to Corey Conners, Keith Mitchell, Kevin Tway, Adam Long, Andrew Landry, Justin Harding and Michael Kim. We hope you’ll be back. 56 players left.

“You want to see how a player has performed at a particular course over the years,” Kannon says, noting that experience may matter extra at Augusta, where even the surprise winners have shown signs of life before their wins. Take Trevor Immelman, who threw down a T5 three years before claiming the title, or Angel Cabrera, who had four top 15s in the eight years before his win. We’re taking out every player without a top 30 finish. This system would have missed Willett’s surprise 2016 win (he only had a T38), but whatever — I’m sticking with it. That means no room for Patrick Cantlay, Tyrrell Hatton, Patton Kizzire, Haotong Li, Shane Lowry, Alex Noren, Xander Schauffele, or Kyle Stanley. 48 fellas now.

This is where we start to wade into the talk of “value.” I know, taking Tiger is the most fun, but everyone wants to bet Tiger, so Kannon says we should look at the bright side: “If Tiger continues to get bet and we see his odds continue to shrink, this will only create more value throughout the rest of the field as their odds go up in response to Tiger’s going down,” Kannon says. The average public bettor loves Tiger, even listed among the favorites, which means we (the newly refined, un-average bettors) have to stay away. 47 players remain. 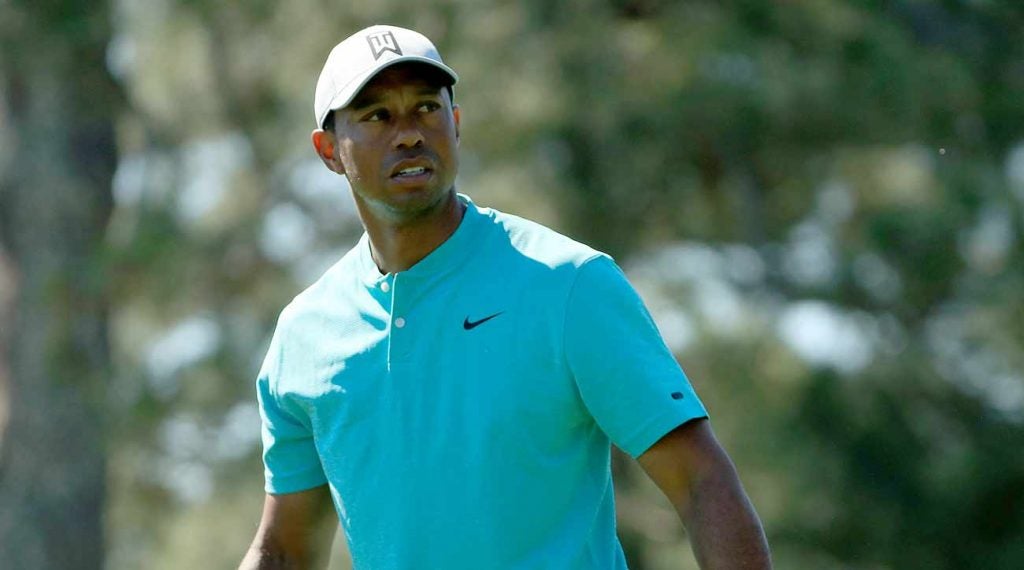 Sorry, Tiger. You may well be a strong Masters pick, but at these odds, we'd better stay away.
Getty Images

7. NO OTHER FAVORITES, EITHER!

Similar to the outsized odds on Woods winning, Kannon advises against picking anyone at 10-1 or better, and I’m going to expand that to include 12-1 for our sakes. Every fan wants to bet on the world’s best players; think of their inflated odds as a tax on that public instinct. This means a painful chop of the game’s best and hottest: No grand slam for Rory, no coronation for D.J., no final destiny for Justin Rose.
44 men left.

“You want to assess how well or poorly they are playing currently,” Kannon says, and looking at results from previous years, what Kannon calls “current form” seems important. Augusta is no place to go searching for your game, so we want guys who have been in the mix, even if they haven’t won yet this year. With that in mind, let’s toss out anyone without two top 15s thus far in 2019.
There’s some serious names on this list, but it’s cut-down time. Webb Simpson, Kevin Kisner (I know, he just won, whatever), Jordan Spieth, Keegan Bradley, Henrik Stenson, Billy Horschel, Kiradech Aphibarnrat, J.B. Holmes, Brandt Snedeker, Thorbjorn Oleson, Kevin Na, Satoshi Kodaira, Emiliano Grillo, Charl Schwartzel, Charley Hoffman, Zach Johnson. Sorry! Down to 28.

“Much of the value on the board for The Masters is gone,” Kannon says. He means, like, period. Oh well. He suggests we follow our minds, value-wise. Phil can contend, but his odds feel more narrative than reality. Woodland has been on good form but struggles every year at Augusta. Patrick Reed isn’t going to repeat. Shugo Imahira doesn’t have the track record. Ian Poulter will threaten the top 20, but he won’t win. Branden Grace has lost a bit of spark.

Okay, now it’s nitpicking time. I can’t trust Jason Day’s health. Nor Hideki Matsuyama’s putter — or Bubba Watson’s, either. Nor Sergio Garcia’s temperament — he’s had his time here, anyway. Brooks Koepka’s bizarre slim-down has me shook. Cameron Smith’s time will come, but not this year. Bryson’s good around the greens, but not great. Matt Fitzpatrick has some value, but I wish he hit it a little further on this week’s soggy course. 12 guys left.

There’s a ton of noise in the data trends at Augusta, and winners have demonstrated a variety of different ways of getting the job done. But a few tendencies stand out: Players who can work the ball both ways, but particularly right-to-left, have an advantage. Lefties have played well of late. Putting is obviously important, but good putting isn’t especially predictive, so can almost be ignored. Same with driving accuracy, which is fairly irrelevant as long as you keep it in play: Masters champions generally make no worse than bogey on any hole throughout the week.
Two stats stand out to show a slight advantage: Driving distance and greens in regulation, the basic idea is that having a short iron into Augusta’s difficult greens is a distinct advantage.

Rafa Cabrera Bello and Si Woo Kim aren’t high enough on either list to give me confidence, even at around 100-1. Same with Louis Oosthuizen, who’d be fun to root for but has been sub-par with his irons. And the more I stare at Jon Rahm’s name, the more I worry his putter will end up buried, end-first, in the 11th green.

Here we are, folks. Your Masters winner will come from these nine contenders — at these prices.

Some things to keep in mind: only three of the last 13 winners have been 20-1 or better. And Justin Thomas is a better golfer than Rickie Fowler. Let’s ride with him as the favorite.
Tommy Fleetwood makes perfect sense for Augusta. Hits it far, pounds a ton of greens in regulation, hot putter, creative player, big-game hunter. He’s never won in the U.S., though, and has MC-T17 in two appearances. That’s why 20-1 odds feel like a reach, especially next to Francesco Molinari at the same price. But third campaign in is where some players find their Masters mojo. Let’s sprinkle a little shine on Fleetwood.

You can’t go wrong with any of the above. Kuchar’s been arguably the best irons player on Tour this year. Adam Scott’s putting as well as he ever had. Tony Finau finished top 10 with a busted ankle in his first appearance last year. Paul Casey is on fire and always plays well here. But there’s one guy who sticks out as the best value play. It’s Marc Leishman!

This affable Aussie’s coronation may come as a surprise to some of you, but should it? He finished 9th last year. He tied for fourth in 2013. He’s thrown down a series of solid major performances, including three top-sixes in his last five British Opens. He hits it far enough, he hits a bunch of greens, he can work the ball both directions and he’s been playing some fantastic golf in recent months. He won the CIMB Classic in the fall, T4 and T3 in Hawaii and finished T4 at the Genesis Open, which often serves as a useful course comparison to Augusta National. Don’t let an MC at the Players throw you off; Leish is the best value on the board.

Here’s the final play, if you started with $200 internet dollars like I did.

Feel free to And if he doesn’t, don’t blame me — I’m just a writer!