Here’s everything you get for winning the 2021 U.S. Open at Torrey Pines 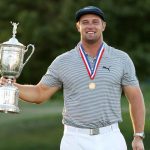 Bryson DeChambeau poses with the U.S. Open trophy after winning at Winged Foot in 2020.

Winning any major championship is the ultimate achievement for a professional golfer, but the U.S. Open — widely regarded as the year’s toughest test — may be the most prestigious of them all.

In 2020, Bryson DeChambeau took home $2.25 million for his victory at Winged Foot, and this year’s winner will receive the same amount. But in addition to a guaranteed place in major championship lore and an infusion of cash, the winner of the U.S. Open also receives a litany of other, lesser-known benefits, all of which are outlined below.

The 2021 U.S. Open champion will enjoy a post-victory photo op on the 18th green with the 18-inch, sterling-silver U.S. Open trophy, which has been given to the champion since 1895. The historic original was lost in a fire in 1946 but the replacement has been going strong since then. The champion keeps the trophy for a year, then can purchase a replica for the trophy cabinet at home.

In addition to the trophy, the USGA also bestows a gold medal to the U.S. Open winner, which in 2012 was renamed the Jack Nicklaus medal, with an image of Nicklaus emblazoned upon it.

The points allocation for winning a major championship may be worth more than the winner’s check itself. The U.S. Open champion receives 600 FedEx Cup points, and 100 Official World Golf Ranking Points.

Depending on where a player is in the standings at the time of his victory, these points can mean the difference between cracking the Top 50 in the world ranking, which gets you ultra-exclusive invites to no-cut WGC events (read: guaranteed money), and a higher ranking on the FedEx Cup points list. If a player makes it through the FedEx Cup playoffs into the Tour Championship, there’s some serious bonus money to be had.

For Ryder Cup-eligible players, points are worth double at the U.S. Open and other major championships, so he’ll get a boost in that department, too. (The European team qualifies via World Ranking points and money earned in European Tour events, which include the major championships.)

A 10-year exemption into the U.S. Open

Winning the U.S. Open grants you entry into the year’s premier major championship for a whole decade. Nice!

Invites to the other majors

The 2021 U.S. Open champion will enjoy exemptions into the year’s other three majors (the Masters, PGA Championship and Open Championship) as well as the Players Championship, for the next five years.

A trip to Kapalua

What better way to start 2022 than to compete in the tropical paradise that is Maui? Yep, the 2021 U.S. Open champion will be eligible to play in the Tournament of Champions — another no-cut event, for more guaranteed money!

PGA Tour players are independent contractors, so they have to earn everything they get. And when a player wins the U.S. Open, he can enjoy some nice job security, with guaranteed membership on the PGA Tour for five years, and the European Tour for seven years.

So there you have it! Not a bad haul for four days of great golf.