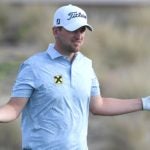 Bernd Wiesberger was among the pros to voice his displeasure with the OWGR restart.

The PGA and Korn Ferry tours are back next week. So is the Official World Golf Ranking. But not everyone is pleased about the timing of the latter.

The OWGR announced on Wednesday that the ranking, frozen since mid-March, will restart next week, meaning it will coincide with the PGA Tour’s return at Colonial as well as the Korn Ferry Challenge at TPC Sawgrass, both June 11-14.

The European Tour, however, is one of the pro golf tours that will still be on hiatus. It doesn’t resume until the British Masters July 22-25. The means the PGA Tour will play six tournaments before the Euro Tour resumes, which is important given the OWGR’s two-year rolling period in which results count toward a player’s ranking, which factors into various forms of playing privileges.

Some players were not happy with the timing of the restart.

In a statement announcing the resumption, the OWGR acknowledged that not all tours are re-starting next week but said, “the averaging formula used in the calculation of the Ranking will help to mitigate any resulting impact, be it positive or negative to a player’s ranking.”

The statement also addressed crucial major and World Golf Championships qualifying, adding “major championships and professional tours involved” are aware of the difficulties of the staggered restart, but the organizations “have agreed, wherever possible and appropriate, to incorporate the Ranking through Week 11 (mid-March) as part of the qualification criteria for their events.”

Golf Digest obtained a memo European Tour CEO Keith Pelley wrote to players. Pelley said he lobbied for freezing points for Euro Tour members unable to play until the restart, or making more points available to them when their season begins — but both were rejected. Pelley added that the World Points list for Ryder Cup qualifying will be frozen until the Euro Tour starts again.