While the majority of PGA Tour players got their first taste of the new rules revisions over the last two weeks in Hawaii, European Tour players will get their first exposure to them at this week’s Abu Dhabi HSBC Championship.

And the main topic players were asked about during pre-tournament interview sessions has also been the most discussed topic everywhere: putting with the flagstick in.

“It’s a difficult one,” said Tommy Fleetwood. “I don’t really have any science to it or anything like that. I know that there are lip-outs that you can have that can catch the pin, that can catch friction of the pin, that go in when they might have a chance of missing. But you can also hit the pin dead-center and it can jar out. I don’t really know if there’s a formula for it. Until we’ve tried it, we won’t know.”

Adam Scott said last week he’ll putt with the pin in all of the time, even on short putts.

“I think we’ll look at [all] putts,” Fleetwood said. “It will probably be something like for the first two or three tournaments, maybe you and your caddie will maybe have a discussion about it or what you feel like.

“It is a little bit odd, isn’t it?” he continued, “But I think once you get your head around it, it’s not really a big deal.”

Henrik Stenson and Lee Westwood both said they plan to leave the pin out the majority of the time but might leave it in for longer putts to give them a better visual.

“I’d probably find it a bit off-putting to be honest,” said Westwood of leaving the pin in. “I like the cleanness of nothing there.

“Somebody will try and work it out and gain an edge or an advantage. They will work out the percentages if the flag is in or something like that, so they will be putting with it in all the time.”

Two people who have already worked out those percentages are Bryson DeChambeau and shot-game guru Dave Pelz. They said leaving the flagstick in is often the better option, but much of a player’s decision will be based on their comfort level. (Justin Thomas, for one, said putting with the pin in is not for him.) 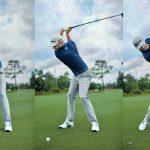 You may also like Driving with Dustin: Three long-ball secrets from the game’s greatest driver

“[The new rules are] a constant development,” Stenson said. “Of course, this last change here now is quite dramatic compared to the previous couple of rules books that have come out.”

While players have discussed putting with the flag in and the new knee-high drop, among other changes, Westwood brought up a theory that hasn’t been talked about much — “over-gardening” on the greens. Players are now allowed to tap down spike marks, and he think some golfers will go overboard. It could create a potential pace-of-play problem.

“Especially around the hole, I think over-gardening will be a mistake, doing it too much,” he said. “I think you’ll see people overdoing it. But I think when there’s a massive spike mark from the group in front and they have walked off, because you know, my shoes pull the greens up a little bit and sometimes you don’t see where you’ve ripped it up. To be able to tap that down I think is a good move.”