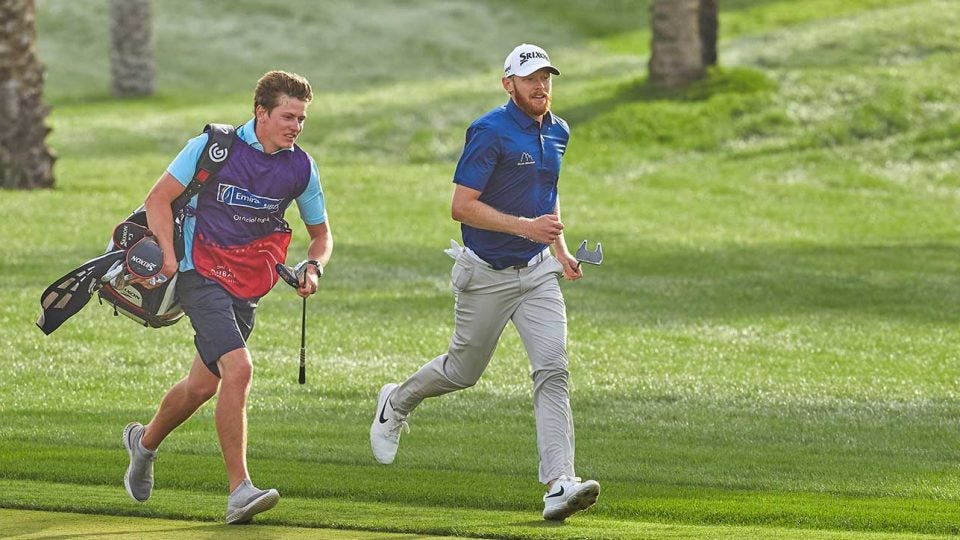 Sebastian Soderberg put new meaning to the phrase "a quick 18" with his 97-minute round Sunday.
European Tour

Perhaps someone should inform Sebastian Soderberg that the European Tour’s “Race to Dubai” isn’t literally a race.

There are many culprits in golf’s slow play crisis, but Soderberg isn’t among them, especially not after Sunday morning. The European Tour pro played his final round at the Dubai Desert Classic like his hair was on fire, finishing with a 3-over 75 in a little over an hour and a half.

Sebastian Söderberg on the fastest round in European Tour history.#ODDC pic.twitter.com/4J4TxH9wV1

“I just tried to play as fast as possible,” he said after the round. “I felt like it would be a fun thing to do and I didn’t necessarily think that it would hurt my game too much at some points.”

The blazing round amounts to the fastest in European Tour history by nearly a half-hour, clocking in at 97 minutes and destroying Thomas Pieters’ previous record of a little under two hours.

Excuse me @EuropeanTour, is this true that Soderberg has already finished?!! That’s most definitely a record if so surely? 🏃🏼‍♂️🏌🏼‍♂️ pic.twitter.com/ObpFyZjZWV

Soderberg was uniquely positioned to pull off the historic feat. His third-round 77 left him at 10 over, in last place among the 71 golfers who made the cut. When he realized he’d be teeing off alone on Sunday morning, he elected to chase a different kind of history.

“I said, ‘we’ll try to go as fast as possible for the first five-to-six holes,'” Soderberg said. “I took my time on putts and normal shots and just ran in between.”

After a birdie on the par-4 5th hole, he was off to the races.

“I played quite well in the beginning so I just kept going,” he said. “I think it was a record-breaking time, so it was quite fun.”

Soderberg finished the tournament well out of contention at 10 over, but incredibly, his lightning-fast final round allowed him to jump Aaron Rai on the leaderboard. Not bad for an early morning workout (provided his caddie lives to tell the tale).

Tough morning for the caddie 😂 pic.twitter.com/wa50hzRv8W