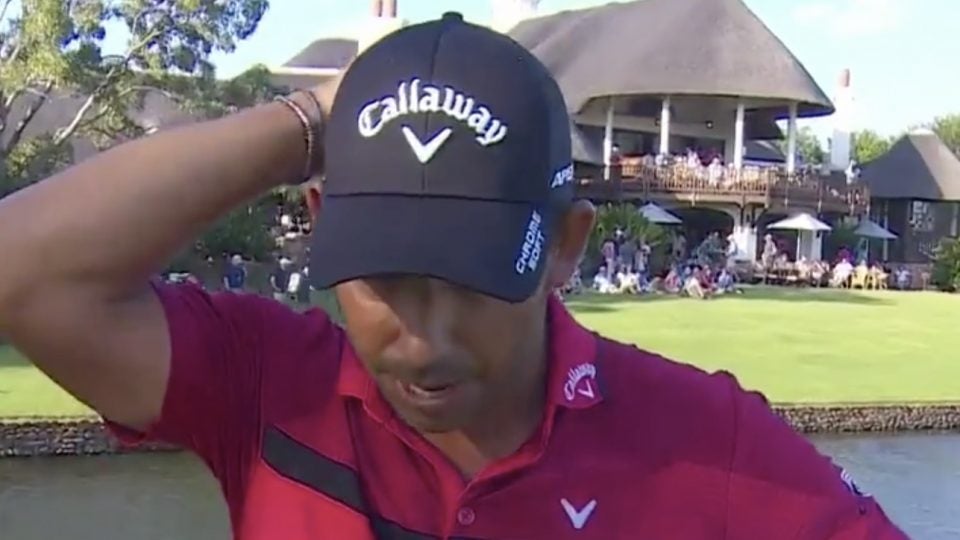 Pablo Larrazabal had a day to remember on Sunday at the Alfred Dunhill Championship, the day he claimed his first victory in almost five years.

It started when he woke up in immense pain. His right foot was covered in a series of blisters that were so painful he wasn’t sure he would be able to play despite his three shot 54-hole lead. He did eventually make it to the golf course, but his game suffered. He made the turn in six-over 41 and his lead quickly evaporated. He was visibly in pain throughout, at one point even walking down the fairway with his shoes in hand to help ease the discomfort.

Pablo Larrazabal had blisters so bad that he took off his shoes and swung Ho Sung Choi-style en-route to victory 🩹 pic.twitter.com/2XYJRE5F9y

But Pablo fought back — but he left it late. He birdied three of his final four holes, including a ultra-clutch downhill putt on his final hole that elicited a giant fist-pump, which you can watch below:

After his round, an emotional Larrazabal poured out emotional. He thanked his entire team and saved some especially kind words for his sponsor, Callaway, which he called the “best company in golf.” Then, he revealed the pain that he was in from his blistered but the motivating thought that got him out onto the golf course and to power through to victory:

“If Tiger can win with a broken leg, what is a blister?”

That, of course, is a reference to Tiger’s performance at the 2008 U.S. Open, and it seemed to do the trick for Pablo on Sunday.

"I woke up this morning and didn't think I was going to play."