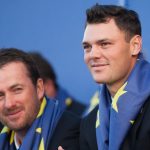 G-Mac and Martin Kaymer were a part of multiple winning European teams in the Ryder Cup.

The European Ryder Cup team is starting to take shape, from the top down at least, as Padraig Harrington added two new names to his list of vice captains Wednesday.

Martin Kaymer and Graeme McDowell are the new men for the job, and both will make their first stints as vice captains in their respective careers. Kaymer, 36, has played on four Ryder Cup teams, memorably draining the winning putt for the Euros at the Miracle at Medinah in 2012. McDowell, 41, also competed in four Cups, and it was his match victory in 2010 that sealed the win at Celtic Manor. They’ll both join Luke Donald as Harrington’s right hand men at Whistling Straits in September.

“I feel honored and humbled to be part of Captain Harrington’s Team of Vice Captains at Whistling Straits later this year,” Kaymer said in a post on Instagram. “Still have huge aspirations on making the Team, however I am more than happy to support the Team in any way possible and keep the trophy in Europe.”

That isn’t hubris, folks. Kaymer is ranked 99th in the OWGR and has seen a recent run of good form with three top 5 finishes in the last 12 months on the European Tour. In order to earn a spot as a player on the team, he’ll need to turn those solid finishes into victories as he ranks in the 30s on the European and World points lists. And from the sound of it, it took Kaymer some time to agree to the role.

“I admit it took me a while to say yes, because it’s a responsibility and if I do something I want to do it properly, so we talked about the role,” Kaymer said. “I’m not the type of guy who is into numbers and statistics. I’m more the person talking to the guys, more of the personal stuff, a bit more of the mental side. I feel like I’m a fairly calm person when I’m playing golf and through my experience I know what they all go through, whether that’s the guys that might be playing the Ryder Cup for the first time or guys that I have played Ryder Cups with before, so I think I understand the feelings quite well.”

If one thing is clear, it’s that Harrington is going with a young group of assistant captains once again, following in the same footsteps that Thomas Bjorn did during Europe’s successful Cup victory in 2018. Robert Karlsson was the oldest of the vice captains at 49, but was joined on the team by Luke Donald (then 40), Harrington (47), McDowell (39) and Lee Westwood (45).

“I’m delighted to welcome Martin and Graeme as Vice Captains, both of whom I believe will bring experience, knowledge, and a great balance to the team room,” Harrington said in a press release. “They have both contributed winning points in Ryder Cup history, have been there and done it, and the other players look up to them. They both have that aura and responsibility in that what they say will have meaning.”

The European roster will be filled by nine players on points on September 12th. Then Harrington will announce three captain’s picks to finalize the 12-man roster. Conversely, American captain Steve Stricker will make six captain’s picks following the Tour Championship in early September, with the other six players qualifying on points.