Tiger Woods capped an incredible comeback season with his 80th career Tour victory at the Tour Championship back in September, and ESPN has prepared a comprehensive look at the season that was, which will air on the network on December 30th — which just so happens to be Woods’s 43rd birthday.
Tiger Woods: Return of the Roar, chronicles Woods’s comeback from back fusion surgery, and begins with the 2017 Hero World Challenge in Albany, The Bahamas, when Tiger played four healthy rounds for the first time in 10 months.
Woods finished T9 in  that event. He went on to play an 18-event Tour schedule, in addition to the Ryder Cup and his pay-per-view match against Phil Mickelson. Woods missed only two cuts and finished in the top 10 seven times. He had two runner-up finishes, and seriously contended in two major championships. 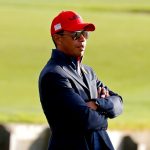 He had the lead briefly on Sunday at the British Open before fading and falling to Francesco Molinari. Three weeks later, Woods carded an electrifying 64 in the final round of the PGA Championship, coming up two shots short of Brooks Koepka’s four-round 16-under-par total.
At the Tour Championship, Woods was in command for the entirety of the final round and won by two shots over Billy Horschel.
ESPN’s production boasts more than 60 interviews with PGA Tour players and other high-profile athletes, as well as multiple sit-downs with Woods himself. Joe La Cava, Woods’s caddie, is also featured.
You can expect to be treated to never-before-seen inside-the-ropes footage, as well as looks from stylized, off-speed cameras from events like the Valspar and Tour Championships. 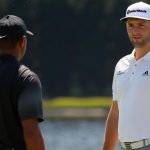 Woods’s new position as an elder statesman of the game — exemplified by his role as a captain’s assistant at the 2017 Presidents Cup and appointment as Team USA captain for the 2019 edition  — will also be covered.
Directed by PGA Tour Entertainment in conjunction with ESPN, Tiger Woods: Return of the Roar will air at 9:00 PM ET on December 30th.
You can watch the entire trailer below.