Ernie Els, Through His Triumph and Heartbreak, Has Always Let Us In 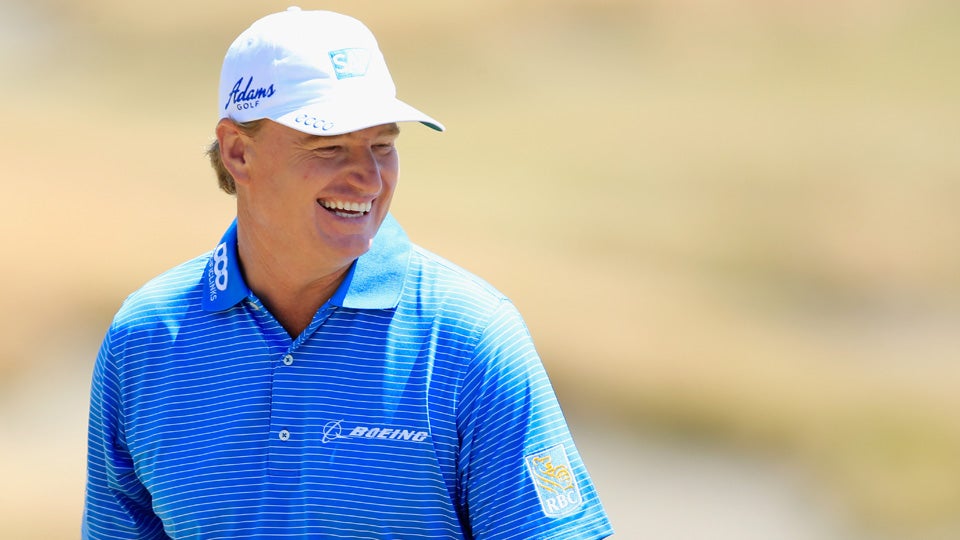 Ernie Els returns to Oakmont for the 2016 U.S. Open, the site of his 1994 Open victory.
Getty Images

In March 1991, during a European tour stop on the Spanish island of Mallorca, an odd windstorm blew across the course, coating it in sand. The sky was brown and the wind was impenetrable and the players—Seve, Monty and David Feherty among them—were miserable. In professional golf you don’t pick your playing partners, and the golfer I was caddying for, Peter Teravainen, was further annoyed to have drawn a special visitor, red-carpeted in by one of the powerful agencies. After watching this chosen-one golfer smoke another drive, Teravainen said, “I don’t know who the f— this kid is, but he can golf his ball.”

Ernie Els was a natural. He was a 21-year-old South African with a crooked smile and the kind of crashing-wave swing that pros stopped to gawk at while crossing the range. There was no Golf Channel then, no World Golf anything, and it was still possible to slip into the game’s major leagues in relative anonymity. Three years later Els won in the United States for the first time, at the 1994 U.S. Open at Oakmont, in a playoff over the putting whiz Loren Roberts and an overheated Colin Montgomerie.

Ernie was 24 then. Now he’s 46. Millions of us have seen his career unfold, and his life too. He has known triumph and heartbreak in both. The game has never had a megastar—two U.S. Opens, two British Opens, plus all those wins in Europe, South Africa, Japan, Dubai and other places—more willing to let us in. Other than Arnold Palmer, you can’t name a more universally loved golfer. When Ernie won Arnie’s tournament in 2010, he slipped into a blue 46L Bay Hill champion’s blazer and said, “I’d like to put this jacket in some dye. Some green dye.” Arnold was pissed, but it passed. You can’t stay mad at Ernie Els. Anyway, Ernie is still looking for an Augusta jacket, and neither he nor Arnold won a PGA. Nobody has everything. Like Arnold in his prime, Ernie is at home at the hotel bar and in the low chairs of the grillroom. He can tell and listen to stories all night long, and if his hobbies cost him some tournaments along the way, he can live with it. You can have your kale salad and grilled polenta. Ernie’s getting himself a steak and ordering bottles of Malbec for the table.

He’s already in the World Golf Hall of Fame, but his greatest honor has to be getting the most votes from his fellow Tour players in a recent SI poll that asked, “If you were in a bar fight, who would you want to have your back?” The Big Easy is ready to rumble. One year at Whistling Straits he threatened to flatten my colleague Alan Shipnuck, but later they buried the hatchet at Kapalua over umbrella drinks. The whole Tour knows the story of Ernie giving fellow golfer Steve Marino a lift in his plane and telling him, mid-flight, “Now, we fight.” They brawled in the aisle just for the sport of it and came off the plane, in one version of it, arm in arm.

Ernie often has two or three caddies in rotation, and he’s had a long roster of agents over the years, but he can fire people and still count them as friends. (He’s a serial re-hirer, too.) People don’t come in and out of his life. His girlfriend at Oakmont in ’94 became his wife four years later, and to this day you’ll see Liezl Els at the majors, charting his every shot with small, precise jottings in a little notebook.

They have two children. Samantha is a junior in high school in South Florida, an athlete and scholar and a delight. Ben, 13, attends the Els Center for Excellence, a school in Jupiter for kids with autism that Ernie and Liezl opened last year, with help from their many friends. Liezl speaks of Ben’s “lovely innocence.” Still, it cannot be easy. Life throws curves, well beyond late-career yipping.

The Big E was asked the other day what he thinks when he catches glimpses of himself at Oakmont in 1994. “He was such a sweet boy,” he said. The crooked smile. Everything and nothing has changed since then. Twenty-two years. A kid becomes a middle-aged man. The blink of an eye.