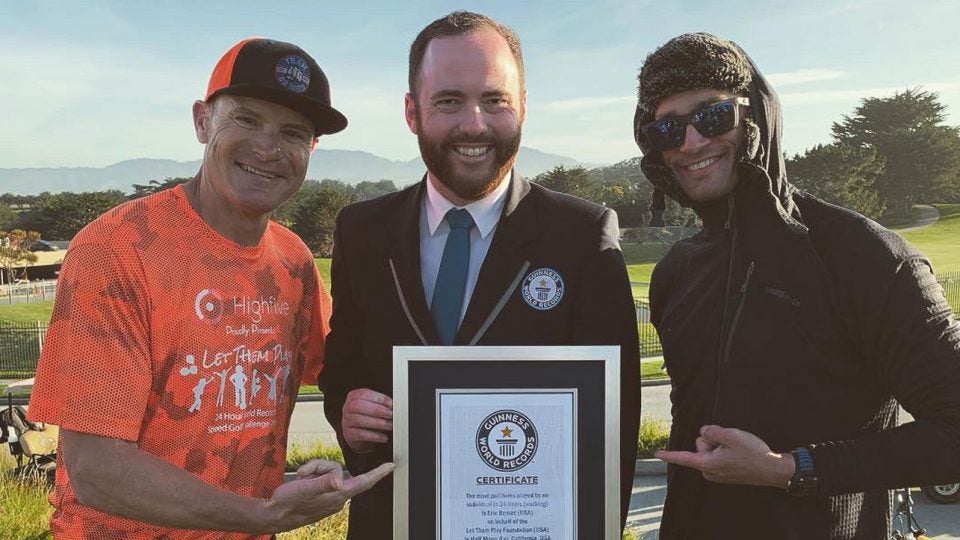 Byrnes, who was an outfielder for 11 years in the big leagues, earlier this week broke the world record for most holes played in a 24-hour span — a staggering 420 holes — finishing with more than an hour to spare. The record was previously held by Ian Colston of Australia, who played 401 holes of golf in a 24-hour time frame in 1971.

Byrnes, 43, began his quest to break the record at 7 a.m. PT on Monday morning on the Ocean Course at Half Moon Bay Golf Links, outside San Francisco.

He officially broke the record at 5:31 a.m. PT on Tuesday morning, then decided to tack on another 18 holes in 90 minutes to close out the record-setting play. So if you do the math, that’s approximately a hole of golf every five minutes.

With his playing days over, Byrnes now spends much of his time as an endurance athlete and analyst for the MLB Network.

But he also works closely with the charity that he started in order to raise money for children’s outdoor sports called the Let Them Play Foundation. Part of Byrnes’ record-setting performance was to raise awareness for his foundation, according to Golfweek. Athletes who have benefitted from Byrnes’ charity reportedly followed him throughout his record-breaking performance.

Playing 420 holes of golf is the equivalent of more than 23 rounds of golf. Based on his frenetic pace and speed, Byrnes roughly played about a 18-hole round of golf every hour. Safe to say this is one golfer with no slow-play issues.