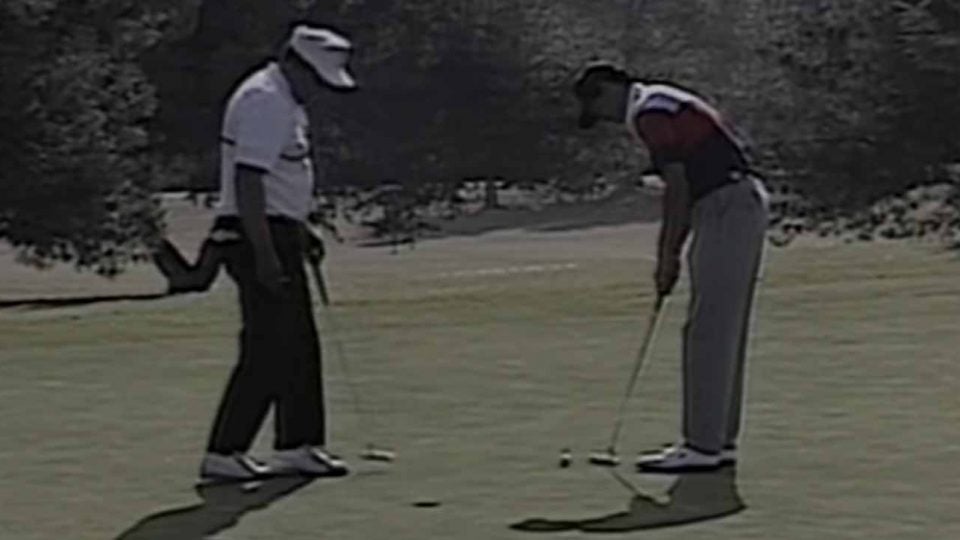 We've heard for years about Earl Woods trash-talking Tiger, but we rarely get to see it.

Okay folks, welcome back to the Tiger Woods YouTube Project, where we’re taking a video from each year of Tiger’s life and breaking it down, looking for clues into the man himself. Plus, they’re fun! Let’s dive into 1992 with special guest Alan Shipnuck.

Chapter 5: Earl, Tiger, and what their trash-talk really looked like

It was the Sunday morning of the 1992 Masters, the day Fred Couples would go on to win his only major championship. But CBS Sunday Morning’s focus was on another golfer exactly half Couples’ age. Tiger Woods was a 16-year-old sophomore at Western High with a wide smile and a whole heap of expectations. CBS’ interview with Tiger, Earl and Calvin Peete, among others, tackled golf’s race problem and revealed a playful side to the intense father-son training we’d always heard about in the Woods family.

There’s a ton to digest here, but mostly it’s fun to see Woods continuing to evolve. He’s more certain than ever, but remains unguarded, quick to joke, quick to smile, not yet burdened by fame. Oh, and the outfits! Welcome back to 1992.

Big picture, it remains beyond incredible the continual scrutiny Tiger was under from such a young age — and how he kept living up to it. Age 2, national TV. Age 5, national TV. Here, still four years from turning pro, he’s already leading off CBS’ Masters morning. His father’s unabashed prediction-making continues all along. How did this guy keep it up?! Maybe there’s a clue to that answer is in the details, here. Because what strikes me the most about the Earl-Tiger relationship we see here is just how jovial it is. Earl’s trash talk might have a distinct end goal, but it’s playful. These guys are tight. Tiger appears to be having fun.

We turn now to our West Coast Tiger correspondent Alan Shipnuck, a longtime senior writer for GOLF who turned pro for Sports Illustrated just before Tiger turned pro in his own craft. He watched the video above and jotted down 10 takeaways. Enjoy!

1. It’s impressive and a little jarring how blunt the discussion is around golf’s race problem. The level of candor is refreshing, especially from Tiger: “Every country club I go to you’re gonna feel it, the sensation where people are just staring at you. If they stare for a long time I’ll stare right back and smile at them.”

2. I love the phat gold chain the teenage Tiger is rocking! 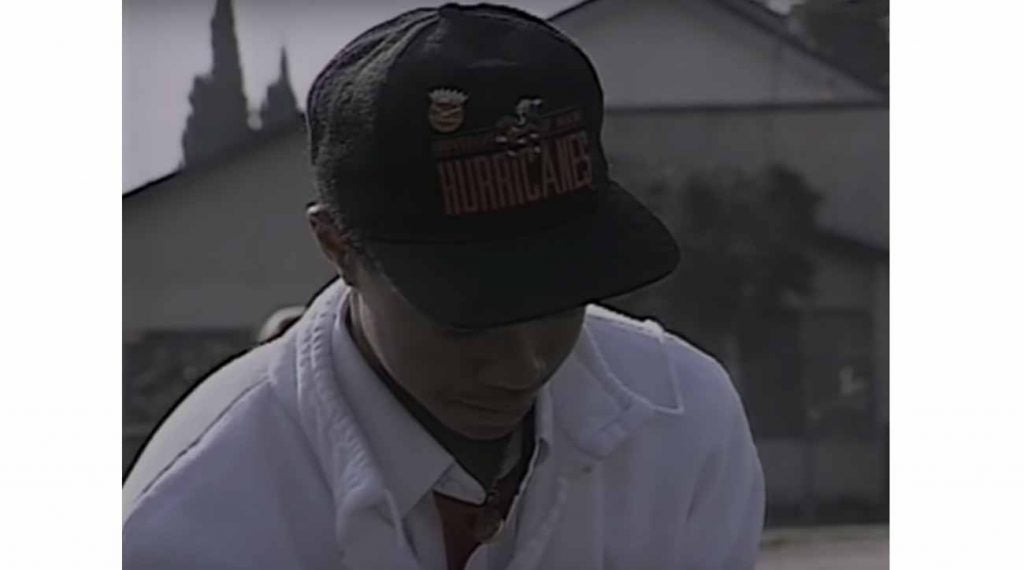 Tiger had some serious hat game in the early '90s — plus this gold chain!

3. He also has a little hepcat vibe in discussing his game face: “I’m not relaxed in a tournament. I’m all pumped-up and hyped. I’m jazzed.” 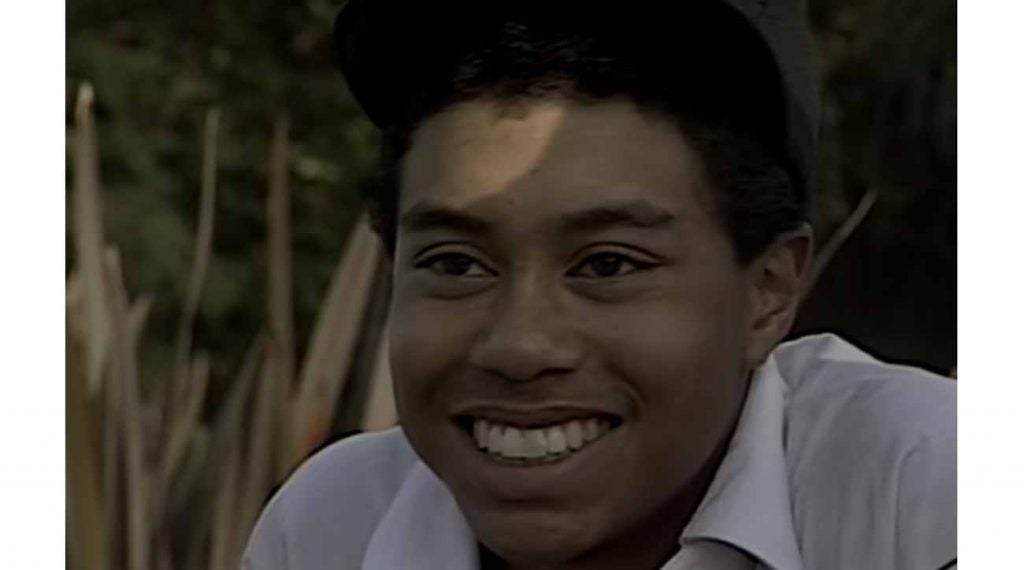 4. It’s a delight to see the palpable chemistry between Earl and Tiger. This is one of the most overanalyzed relationships in golf history. At its core it’s quite simple: a father and son who love golf and love playing together. 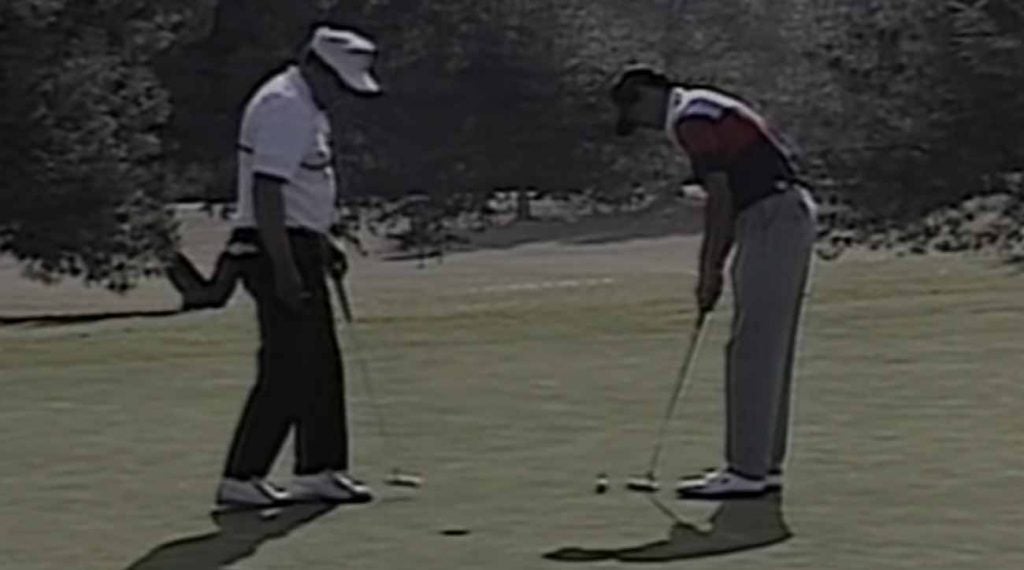 We've heard for years about Earl Woods trash-talking Tiger, but we rarely get to see it.

5. No human has ever worn a driving cap with as much elan as Calvin Peete. 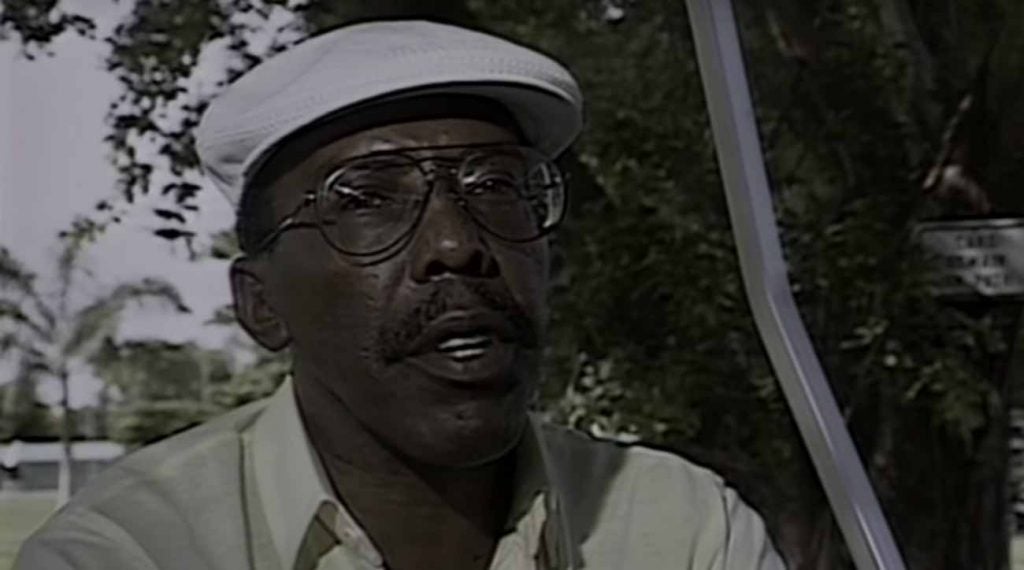 6. Young Tiger has the yips! In this quick video he misses two shorties. I’m not sure he missed that many during the entirety of autumn 1996 to June 2008. 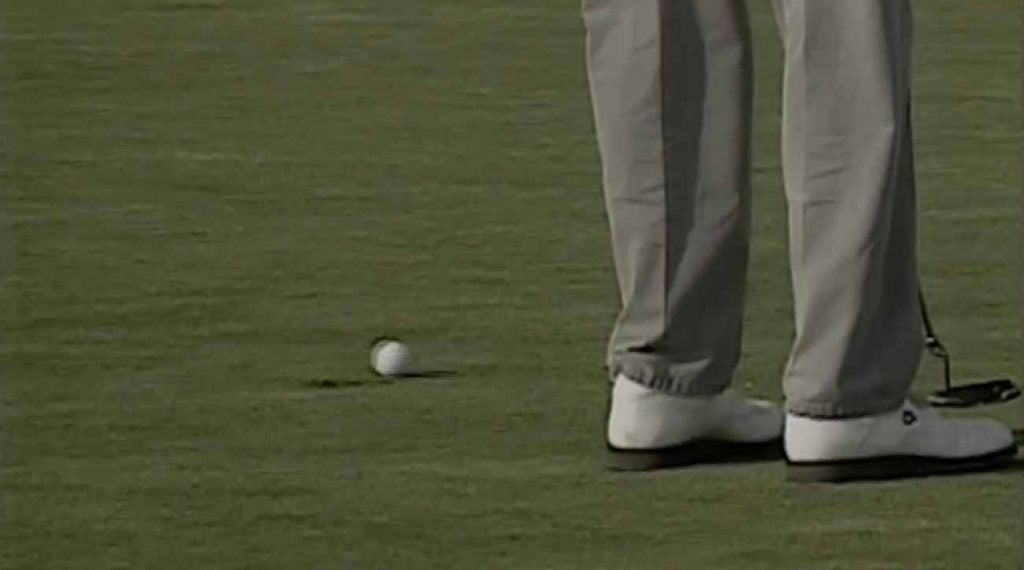 7. During a practice round for the L.A. Open, 16 year-old Tiger is wearing his player’s badge on the pleats of his trousers. That seems like a really dangerous place to stick a pin. 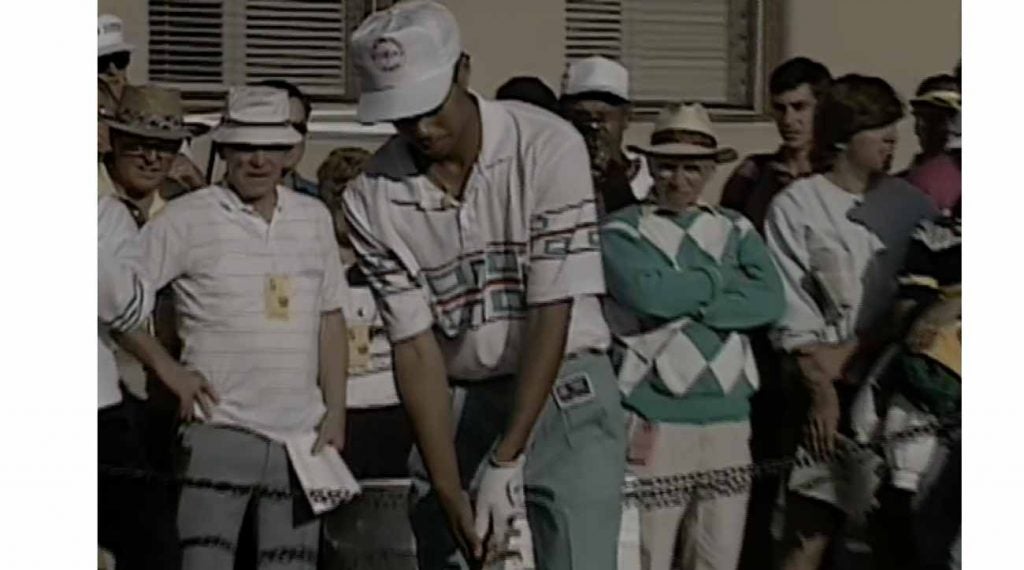 Check out that Player's Badge on the hip!

8. Calvin Peete’s swing is unorthodox but his tempo his to die for. 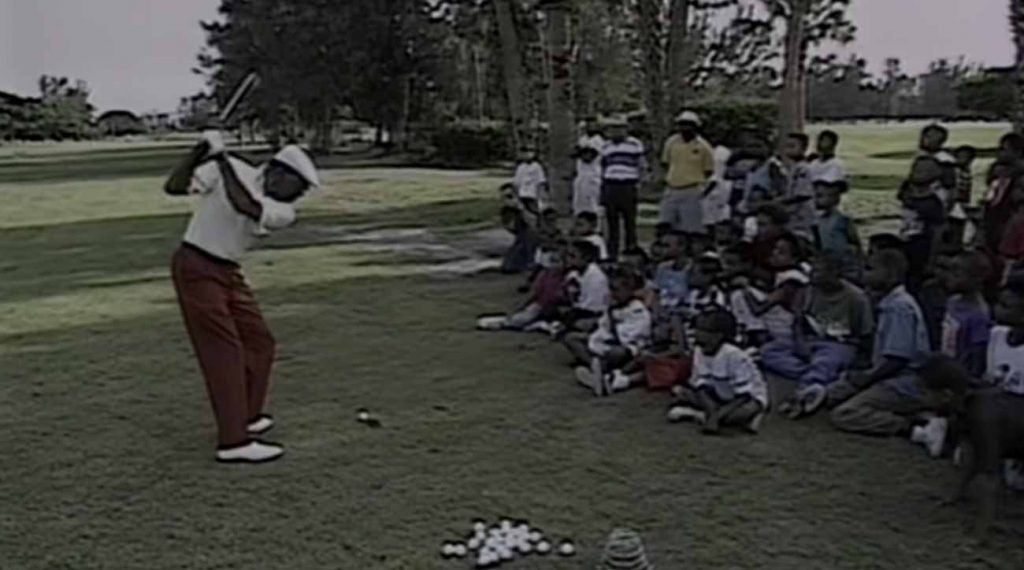 Calvin Peete was the PGA Tour's most consistent driver for years on end.

9. I miss Earl. Yeah, he could be a bit of a blowhard, but he was so amusing and endlessly good copy. 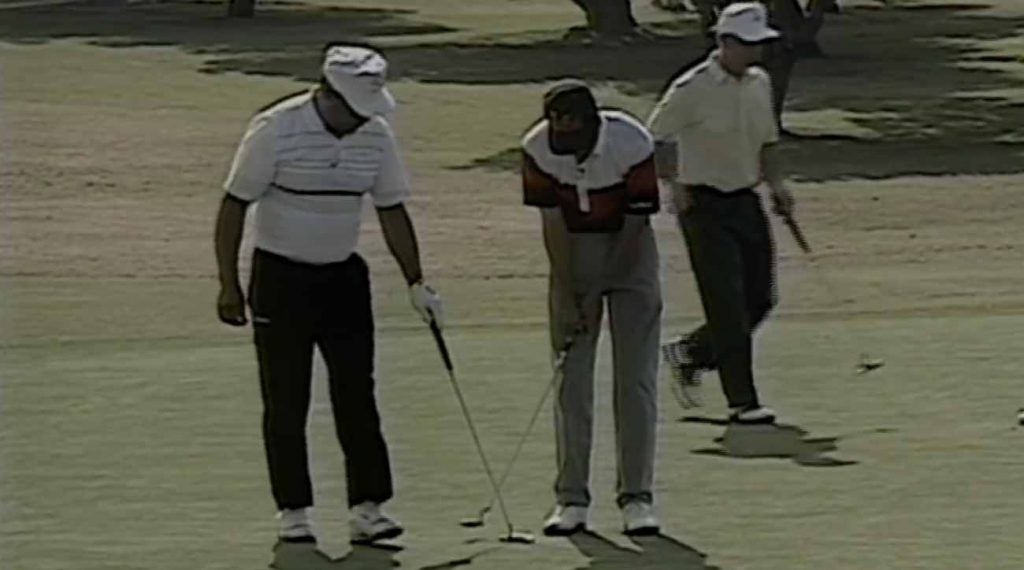 Earl and Tiger, sharing a laugh.

10. Tiger’s self-belief and assuredness is incredible. Peep that video from age 5, when he’s being interviewed by Jim Hill: “I’m sure.” Yes he is. 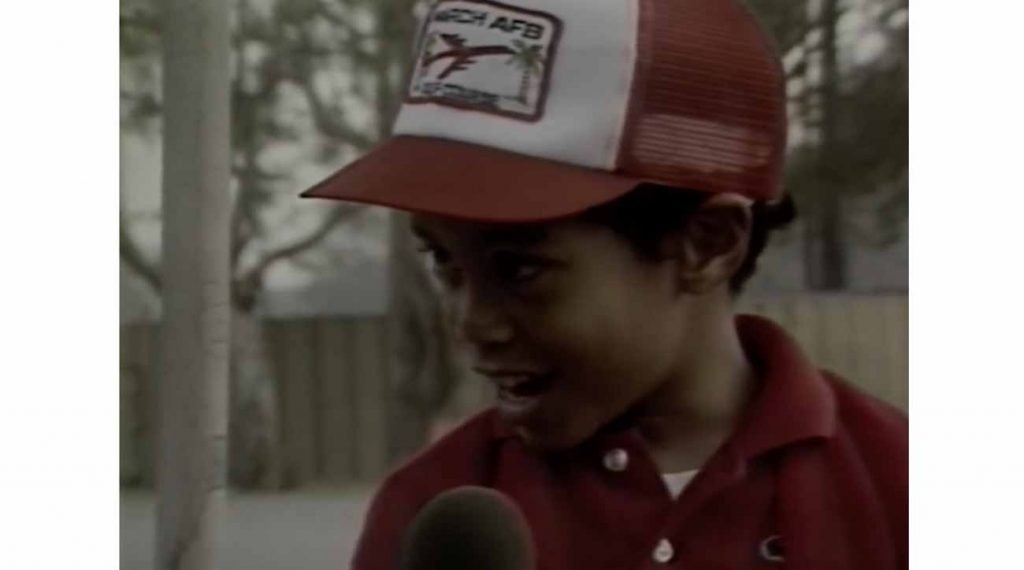