‘The dummy was out on the driving range:’ Pro explains rough PGA start 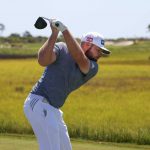 Tyrrell Hatton hits a tee shot on the 4th hole on Thursday at the Ocean Course at Kiawah Island.

Tyrrell Hatton “forgot how to swing a golf club.”

The 29-year-old pro “was pretty miserable” on Thursday’s opening day of the PGA Championship.

And then he played his first hole.

Hatton would drive it 308 yards into the left rough on 10, his opening hole, and make a par 4 en route to a one-under 71, one of a handful of players to break par — four-plus hours after he believed he couldn’t. None of his 71 strokes were maybe better than how he negotiated his 300-or-so-yard walk from the range to 10 at the Ocean Course at Kiawah Island.

Tyrrell, for the far too many of us who have been in your golf shoes, how’d you do it? How does a dummy get … undummied?

“Well, it happens more often than not, I’d say,” Hatton said. “I guess you kind of want to leave the bad stuff on the driving range because it doesn’t matter too much there. On the flip side, it is nice to actually hit some good golf shots and go out there with a little bit of confidence. I didn’t really have that today. I didn’t feel like I was going to have a good day with just how bad I actually did hit it.

“So you still got to go out there and try your best. Obviously, I tried to do that. Thankful for the score I ended up with.”

What about that first tee shot? When you haven’t been hitting it, but now have to?

“I think if you get a good tee shot away, kind of try and build a bit of momentum there, and I ended up hitting it into the left rough,” Hatton said. “We were quite lucky I had a good lie and managed to get it onto the green and sort of make par, which isn’t disastrous.

“It’s kind of one of them days where you know par is going to be a good score out there. Then just obviously take it one shot at a time and see how you go.”

Which, despite the cliche, is what he did. He parred 10 through 14, played his next nine holes at one over, then finished with birdies on three of his final four holes (the other was a bogey). On the par-4 9th, his last hole, he dropped a 29-footer for a 3.

“Considering how bad my warmup was today, I’m even happier that I managed to shoot under par,” Hatton said.