Brooks Koepka’s sheer dominance of Bethpage Black was the top storyline of PGA Championship week — as it should have been — but an early lookahead to the 2024 Ryder Cup served as a compelling undercard.

The Ryder Cup heads to Whistling Straits in Wisconsin in 2020, then to Rome in 2022 before it returns to Long Island and the Black Course in 2024. Some are already terrified of what’s to come from boisterous New York crowds. “Good luck to Europe,” Koepka said. Euro star Rory McIlroy’s brevity got his point across: “No comment.”

But fans, regardless of which side they cheer for, will have little to applaud about if the Black Course sets up similar to how it did last week. The hack-it-out rough and brutally long par-4s are a match-play fan’s nightmare. Match play, and the Ryder Cup, should be about risk, reward and shot-making — not winning demoralizing par-4s with a par. (Bethpage, in fact, only has two par-5s.) And of course a venue doesn’t need water hazards to be great, but Le Golf National and its splashy finish — bad pun intended — was great theatre as hopes were dashed in a blink of an eye.

But this shouldn’t be breaking news. The PGA of America has years to identify its Black Course setup. Players are expecting a tamed version, too. 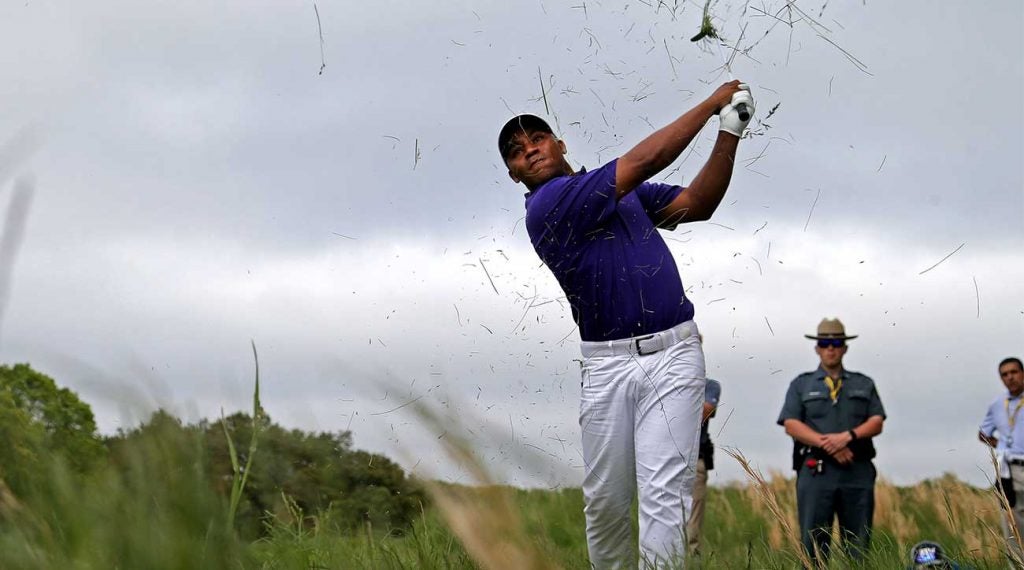 Harold Varner III hacks out of the rough during the 2019 PGA Championship.
Getty Images

“Typically in match play you want scoring opportunities, so I don’t think it will be a good idea to set it up like it is here, which I don’t think they would,” said Webb Simpson. “I think they’ll have light rough. I think it needs to be a little shorter for a Ryder Cup, maybe take No. 7 back to a par 5.”

Graeme McDowell, who was an assistant captain for Europe in 2018, agreed. Although he also campaigns for more neutral setups.

“They won’t set it up like this,” McDowell said. “This will not be the ’24 Ryder Cup setup — I can guarantee you that. This looks more like Paris National than Hazeltine. It will be more of a Barclays setup for ’24. It will be less rough, it will just be bombs way.”

Henrik Stenson said it’s hard to pinpoint exactly how it will be setup so far in advance — it depends on the American players’ strength, he says — but thinks the home-team advantage is becoming stronger every year with home captains having an influence on the setup.

“Hazeltine was a long course that was cut down and made wide and with as little rough as possible to try to make it a putting competition because they thought they had the upper hand on the greens,” Stenson said. “When we had thick rough and a narrow golf course at Le Golf National, that kind of suited the Europeans better because accuracy off the tee and greens in regulation seems to be a little stronger on our end.”

Bethpage may have that iconic warning sign out front, but for one week in 2024, it needs to dull its teeth.

“I think the fans would like to see a few more birdies,” McIlroy said. “I would say that for match play, it should be a little more of a generous setup. I would think.”