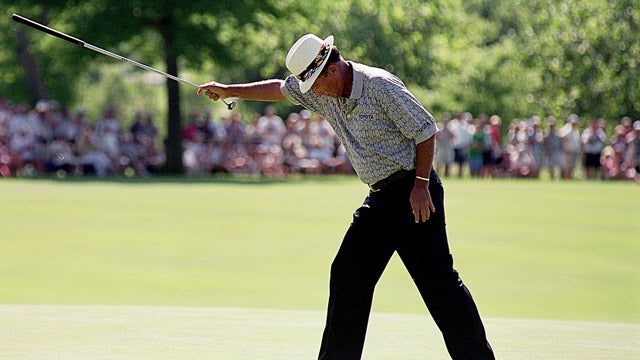 The Hall of Famer, 80, discusses the double eagle that never happened and why meeting Mother Teresa trumps any golf achievements.

What is the strangest thing that you’ve seen on the golf course?

Well, to tell you the truth, I did something that’s never been done on Tour. In the Buick Open in Grand Blanc, Mich., I hit a drive and a 6-iron to the 13th hole and made a double eagle. And that’s the only time a double eagle has been rained out on the Tour. [Laughs.] That was strange.

Well, it rained hard. I was leading the tournament, but they rained the round out. Two-thirds of the field had finished. See, they never had rules on the rained-out round. The officials could make any decision they wanted. Depending [on] who was leading, that’s the way they made the ruling.

That’s a shame. Was there a moment when you realized you were good enough at golf to play for a living?

Where did the 67 happen?

It was a place called Berwind Country Club in Puerto Rico. I was a caddie. I formed a union because they were not paying us enough money. They were paying us 25 cents for 18 holes, and I told the adults, that’s not enough. And I organized them all and we did a strike, and they raised it to 35 cents. Six months later, I said 35 ain’t enough. Then they went to 50. When I went into the Army when I was 19, we were getting $1.70 for 18 holes. I met Mother Teresa in the Philippines. I was a good friend of President Marcos, and we were at Puerto Azul at a course that Gary Player designed, and [Marcos] asked me, “Who would you like to meet, Mother Teresa or the Pope?” And I said, “We will always have another Pope, but we will never have another Mother Teresa.” So I met her and spent 45 minutes with her. Victories are important because of the money and the ego that you  create with it, but this was not a material thing, this was a spiritual thing, meeting the only saint in the world then.

Which young players on Tour today remind you of yourself?

How do you regard your career?

In life, you have to have goals. And I have conquered most of my goals. I didn’t become the greatest golfer in the world, but I became the greatest Puerto Rican golfer of all time.

When you were young, who impressed you most?

I must have played 15 tournaments with Ben Hogan, and I don’t think I ever saw him miss a green. He was like a machine. The first time we played together was at Oakland Hills, and I went to the 1st tee and I said, “Mr. Hogan, my name is Chi Chi Rodriguez. And out of respect to you, I know that you have a bad knee. You mind if I fix your ball mark throughout the round?” And he says, “I appreciate that very much.” He liked me after that.

Before we say goodbye, can you tell us a joke?

Well, there was this guy who had this pet shop, and he had this parrot. And this lady used to walk by every day and the parrot would go, “You’re fat! You’re ugly! You’re disgusting!” The lady kept walking by for months. “You’re fat! You’re ugly! You’re disgusting!” And the lady finally got mad and came to the owner and said, “Hey, your parrot doesn’t respect me and she has embarrassed me in front of all the people every day. If you don’t do something about it I’m gonna sue you.” So the guy told the parrot,  “You better behave yourself with that lady, or I’m gonna put you in the oven.” So the next day the parrot is right there and the lady is going by and she looks at the parrot and the parrot looks at her, and says, “You know!”