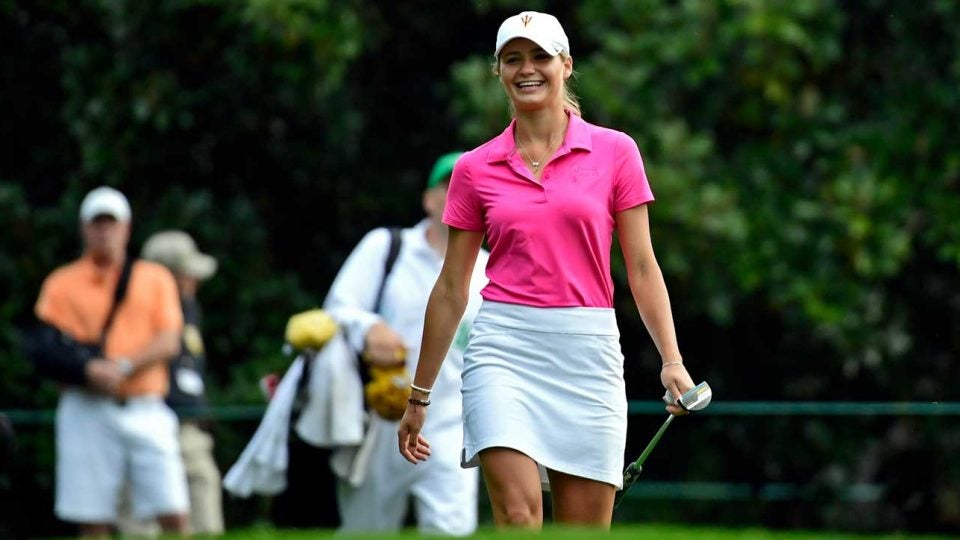 Sofia Anokhina's smile tells it all.
Courtesy of Augusta National

AUGUSTA, Ga. — Before this week, Amanda Doherty had only seen Augusta National once. It was Sunday, April 11th, 2010. The day Phil Mickelson won his third green jacket. Amanda was with her dad, Mike, and a friend of his.

It goes without saying, but Augusta National wasn’t hosting women’s tournaments back then. The club had not even admitted a single female member. But Mike Doherty’s buddy had a hunch. “He said, ‘You know, the next time I’m here, I’m gonna be watching Amanda play,’” Mike recalled Saturday afternoon. But back then he quickly discarded the idea. Yeah, right.

On Saturday, nine years removed, the prophesy has been realized. And it wasn’t just that Amanda competed in the Augusta National Women’s Amateur. Her golf-crazy father carried her bag. And yes, his buddy was in the crowd.

This Augusta National really is the place of dreams — it’s all anyone wants to talk about. Perhaps that was the idea all along.

“I don’t think I fully got it until I actually stepped on the Augusta’s ground. I was like, ‘This is real. It’s pretty real,’” said Sofia Anokhina, the lowest-ranked am in the field. On Tuesday evening, Anokhina, who is Russian, rode in a quiet van filled with Italian players. The vehicle turned onto Magnolia Lane. “I heard the adjectives they were using, but very quietly,” she said. “I was just like, ‘No. You guys can say it out loud! It’s gorgeous.’”

An event photographer snapped a pic of Anokhina in the moment. Encyclopedia Britannica could use it for “dreams realized.” 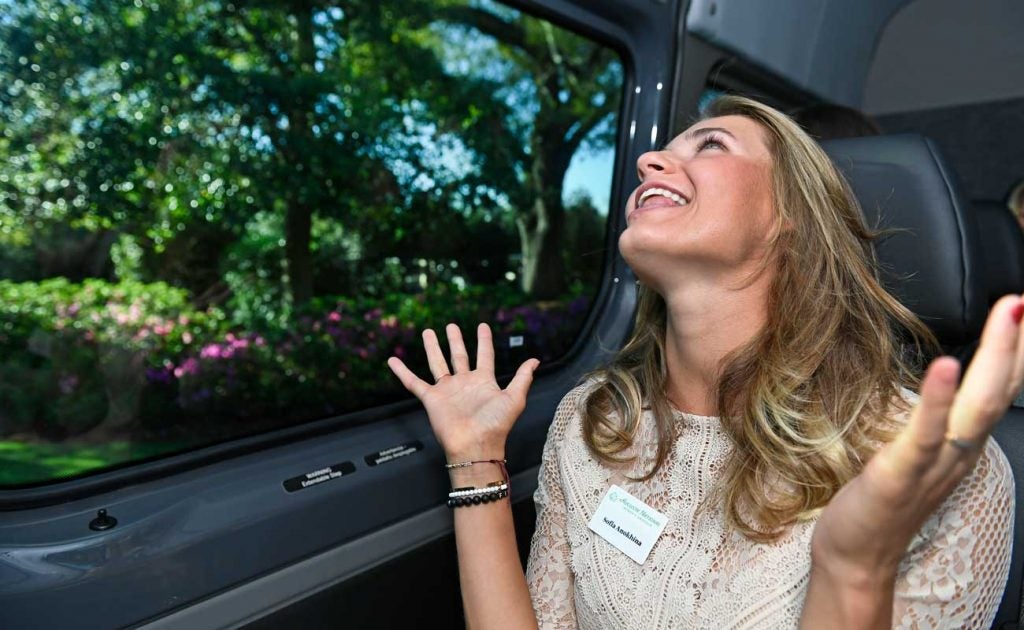 A ride down Magnolia Lane. Check.
Courtesy of Augusta National

Anokhina and Doherty were two of 10 women who advanced to Saturday’s final round through an 11-for-1o playoff for the final spots. At five over with just 18 holes to play, were they going to chase down Jennifer Kupcho, who eventually reached 10 under Sunday, four clear of the field? No. But few people were completely locked in to the scoreboards at Augusta National Saturday.

As Doherty, Anokhina and the other competitors finished their rounds, with the event they’ve looked forward to for months finally closing, a train of high-fives awaited them. Right behind the 18th green was a line of four little girls, their right arms reaching out over the ropes far as they could stretch. Opposite them was another group of future women amateurs.

Back near the clubhouse was Kinley Brazell. She’s an 8-year-old golfer, and she very eagerly told a reporter she’ll be nine in just 11 days. Kinley was with her father, Kevin, from nearby Columbia, S.C. Her dad sported a newly purchased Augusta National backpack. Tucked into one of its pockets was an Augusta National teddy bear, price tag still affixed. Kinley was seeing Augusta National for the first time. She clutched a yellow Augusta National Women’s Amateur flag while looking to score autographs from all 30 competitors. “They can sign anywhere on the flag but right here,” she said, motioning to the bottom right corner. “That’s where we’re putting our tickets.” In her mind, the flag is already framed and hanging on the wall.

In Kinley you could see the early effects of the Augusta National Women’s Amateur. Doherty was exhausted from four days of golf — she’s headed to Clemson for another tournament tomorrow — and she had already completed a lengthy signing session. But before heading to Founder’s Circle for a family photo, she had time for one more John Hancock. And so, she became Kinley’s seventh signing. Twenty minutes later, Anokhina became her 10th. 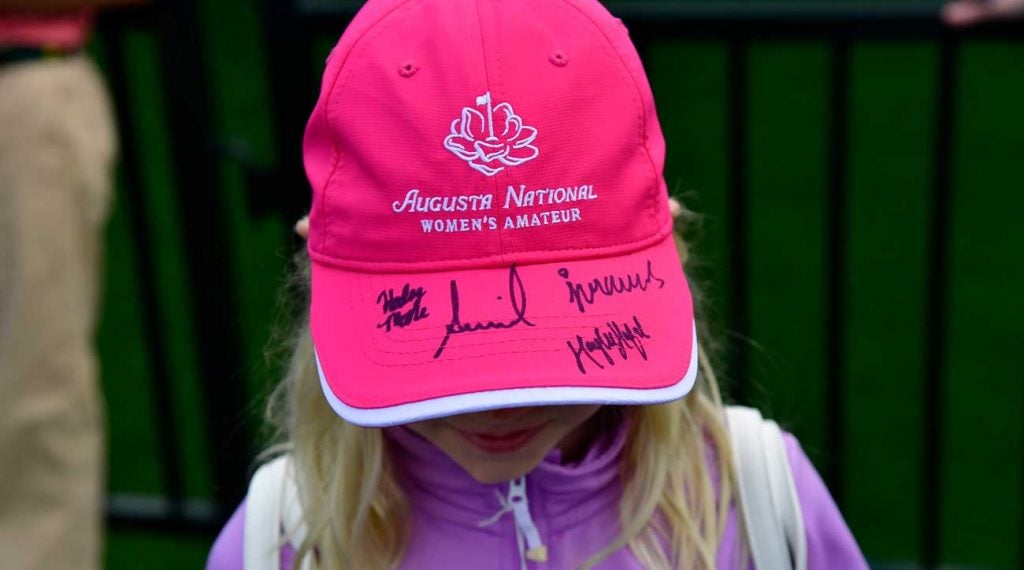 “This event is just so big for women’s golf,” Kevin Brazell said. He knows a simple inspirational act — a high-five, maybe an autograph, seeing great golfers on TV  — can push someone into a hobby like golf. Before today, Kinley was already hooked, but now she’s interested in getting good.

But first, the autographs. Kinley needed more golf swag. She already has a Build-A-Bear teddy named “Rory” after her favorite golfer. But it’s not just Rory. “Can you tell Tiger Woods I want to meet him,” she asks. She likes Jordan Spieth, too. Those are her big three: McIlroy, Woods, Spieth. Without the Augusta National Women’s Amateur, that might be it. But Saturday afternoon, she was also looking for Alexa Pano.

Pano, as you might know, starred in a Netflix documentary called The Short Game. Kinley watched it with her dad and was desperate to meet Pano on Saturday. Unfortunately for all parties, Pano missed the cut by one. All she could do was watch. Luckily for all parties, Pano is just 14. She’ll have plenty of chances to play this event. And living just 75 minutes away, Kinley will have plenty of chances to watch her and other inspiring women at this event. Her 11th and 12th signatures came as a tag-team effort with another autograph-seeking girl who had tracked down more competitors. Kinley provided the Sharpie.

She and her father will return to Augusta National on Sunday to watch the Drive, Chip and Putt competition. They can’t get enough of this place.

“You just watch. She’ll be playing in this event one day,” her dad said.