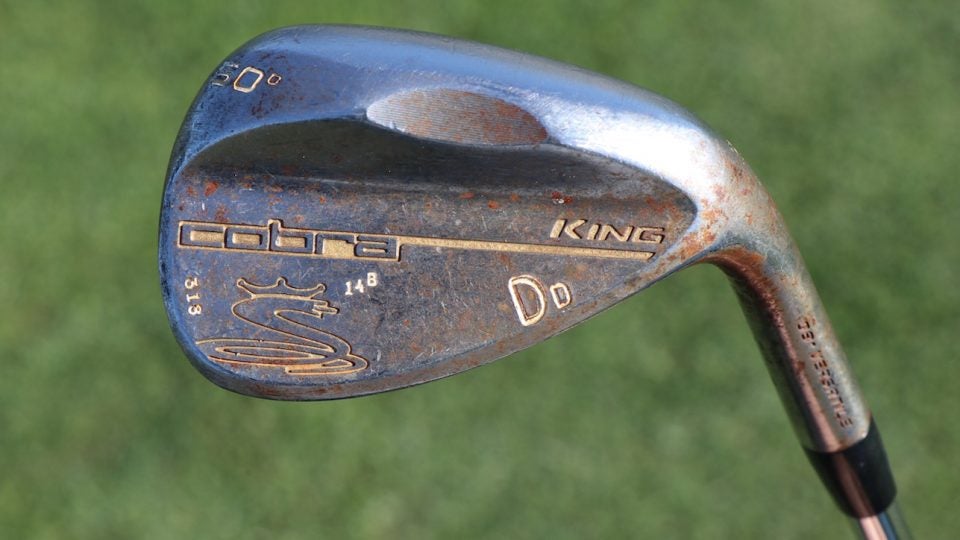 David Duval is not only a former World No. 1-ranked golfer, but he’s also been one of the most interesting golfers in the world when it comes to equipment throughout his career.

He won 12 PGA Tour events as a Titleist staffer, and then he became the first player ever to win a major using Nike clubs at the 2001 Open Championship. While at Nike, he used custom irons and wedges that gear heads swooned over. He later signed a deal with Scratch to use the company’s custom irons, and most recently was on Cobra’s staff.

On Wednesday ahead of the 2020 AT&T Pebble Beach Pro-Am, I had the pleasure of taking in-hand photos of Duval’s clubs. Here’s what I found in his mixed bag:

1) His driver is built for forgiveness 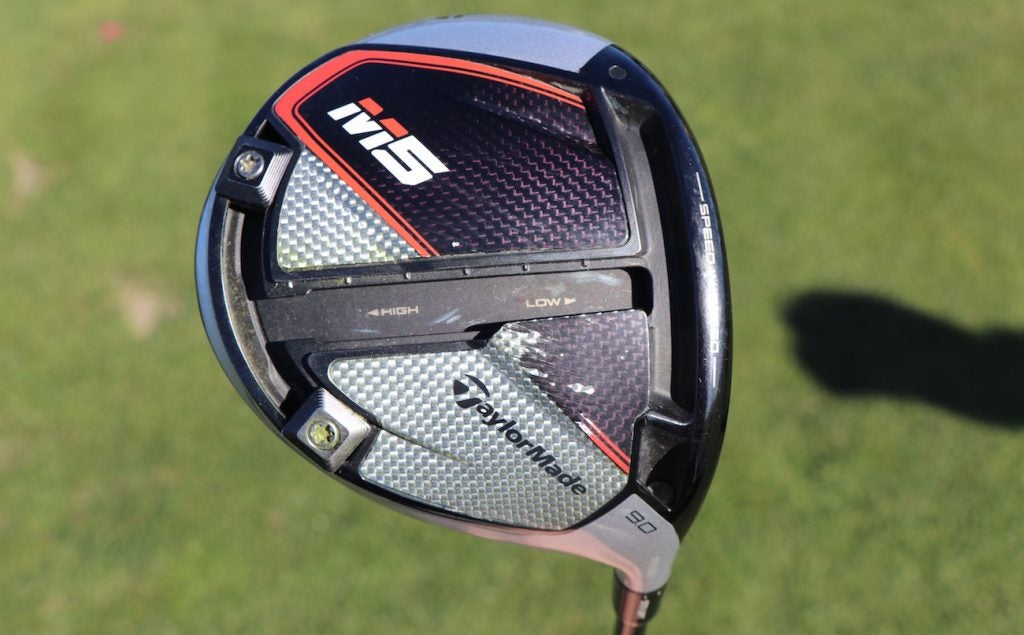 Duval has the weights in his 9-degree TaylorMade M5 in the most forgiving setting possible. This configuration — with the weights all the way back and spread to the far heel and toe portions — helps to raise MOI (moment of inertia) to help increase forgiveness on off-center strikes.

2) Puttin' on for Cherry Hills 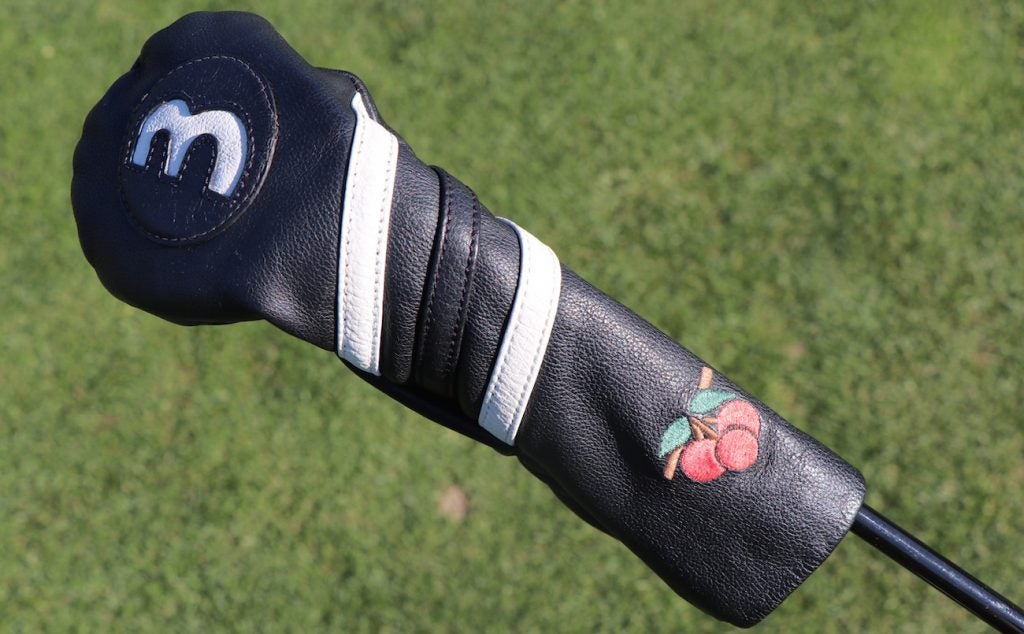 As a Denver, Colorado-resident, Duval is a member at the famed Cherry Hills Country Club. He represents his home club proudly with this three-wood headcover made by Stitch Golf.

By the time Duval was in his prime on the PGA Tour, Cherry Hills wasn’t a regular Tour stop, but most golfers will know Cherry Hills as the site of Arnold Palmer’s 1960 U.S. Open win. Palmer won that year by two strokes over an amateur by the name of Jack Nicklaus. 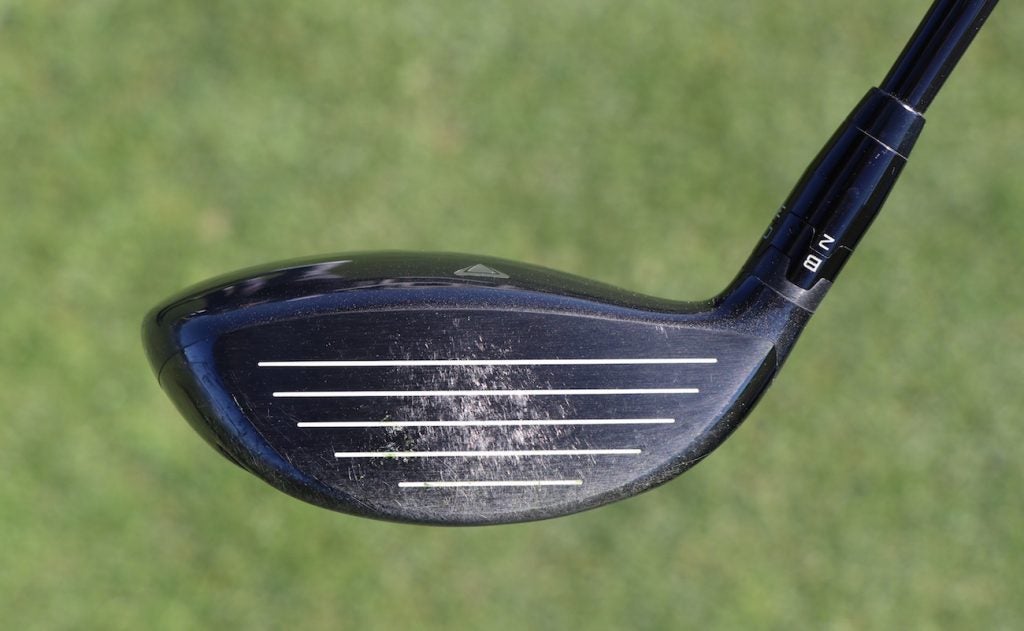 Under the hood of Duval’s Cherry Hills headcover is a Titleist 917F3 15-degree fairway wood that’s been worn down directly in the center of the face. Duval may have fallen from his World No. 1 spot, but he’s still a world-class ball striker. 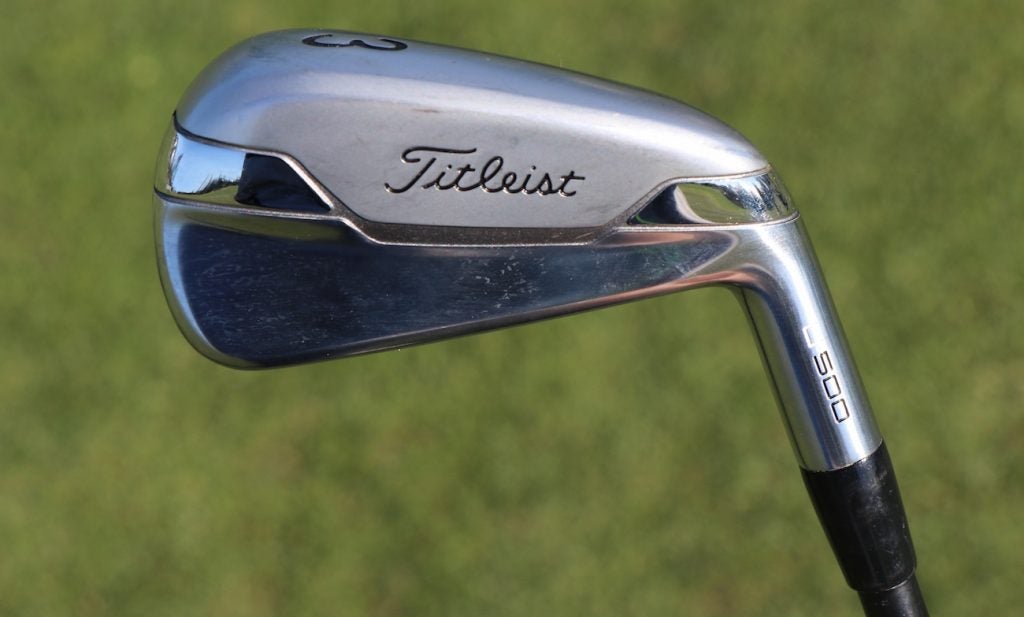 Duval has never been much of a 5-wood or hybrid user, instead opting for long irons in his set. Nowadays, it seems Duval is taking advantage of the more forgiving, hotter-faced driving irons rather than using a blade 2-iron like he has in the past.

His Titleist U500 3-iron is equipped with a KBS Tour Hybrid Prototype graphite shaft. 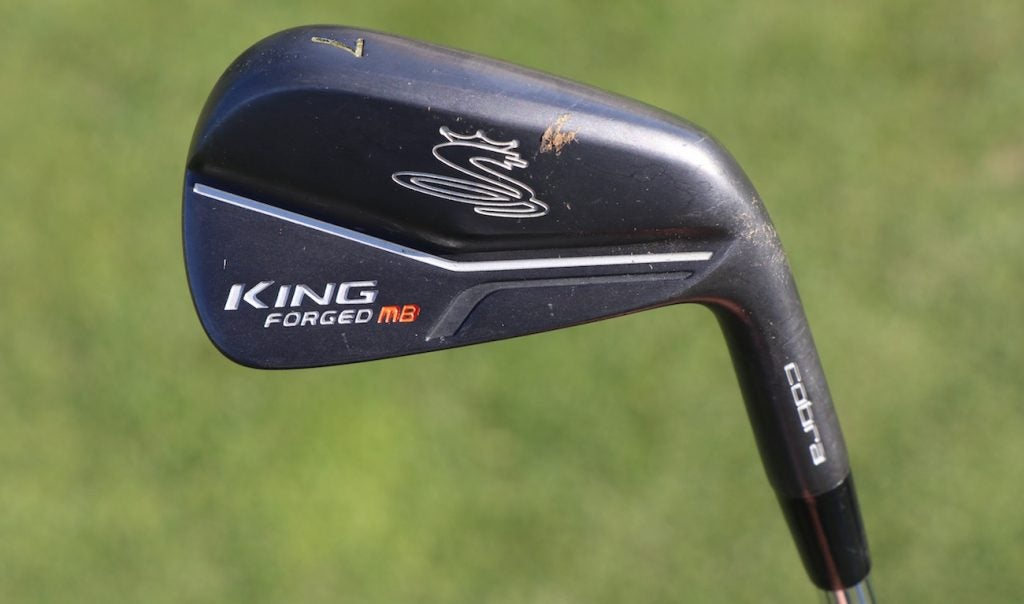 Duval has typically used custom blades throughout his career, and now he’s using Cobra’s King Forged MB irons that were modeled after Rickie Fowler’s custom irons. They have a Diamonized Black Metal finish, CNC-milled grooves, and they have a Tungsten weight in the sole of their forged bodies. Most of Duval’s irons throughout the years have had a chrome shine, but these midnight-black irons have just as much bag appeal. 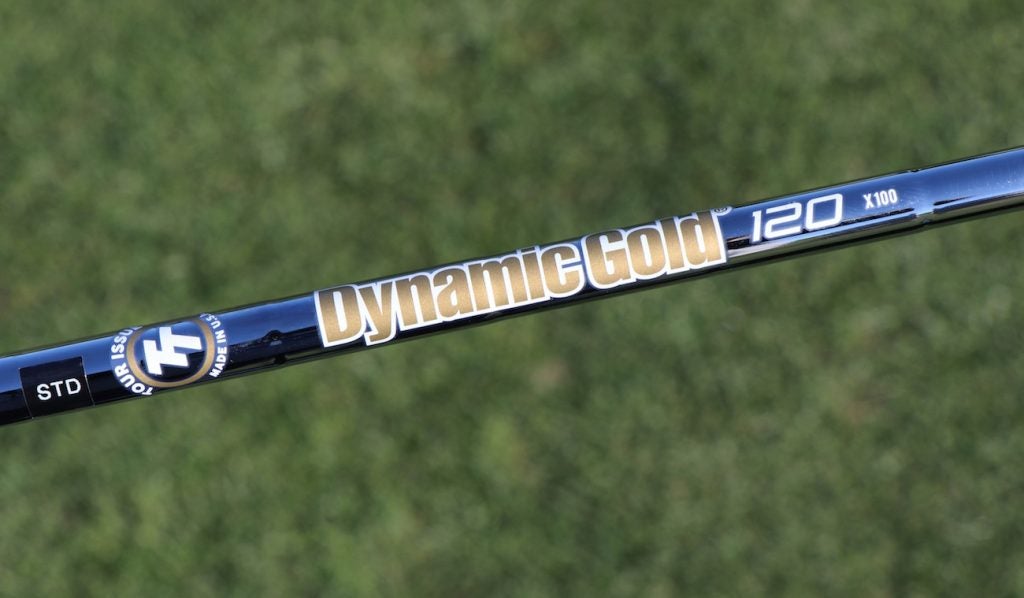 Duval used mostly True Temper Dynamic Gold Tour Issue X100 iron shafts in the past, but he’s since switched into a slightly lighter option. His True Temper Dynamic Gold 120 Tour Issue X100 shafts are designed for a similar profile and launch as his old shafts, but they have a lighter weight to make them a bit easier to swing. It seems the 48-year-old is making the proper equipment adjustments to deal with Father Time. 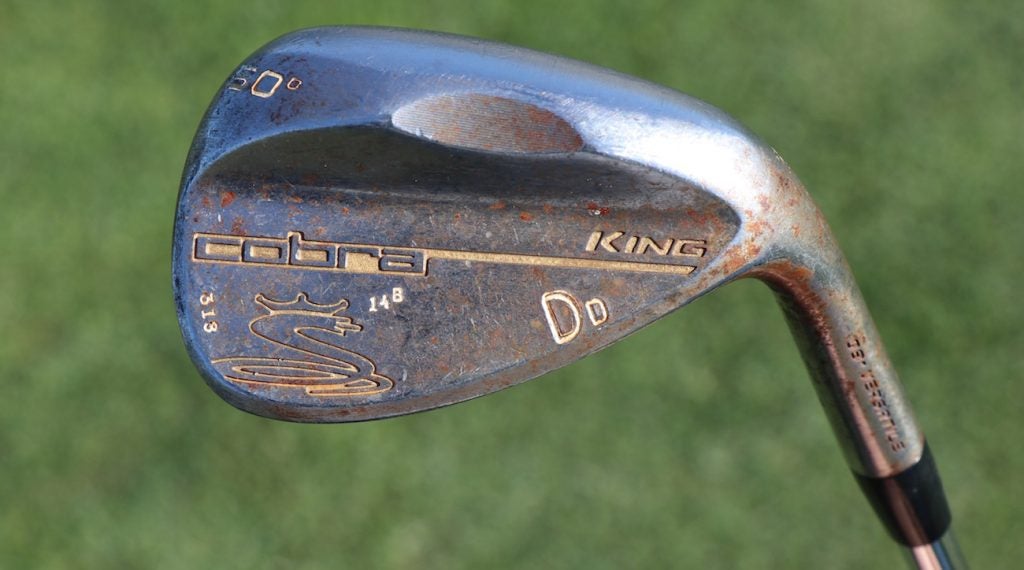 Each of Duval’s three Cobra King Raw wedges are stamped with Duval’s initials, and they have seemingly mysterious numbers stamped on the back cavities. Cobra Tour rep Ben Schomin cleared up the numbers for us, however. The “313” is not an ode to a famous Detroit area code, but rather, it’s the date (March 13) that Schomin built the wedge. Then “14B” stands for 14-degrees of bounce.

To go along with this 50-degree wedge, Duval also has 54-degree and 58-degree wedges, each of which are equipped with True Temper Dynamic Gold Tour Issue S400 shafts. 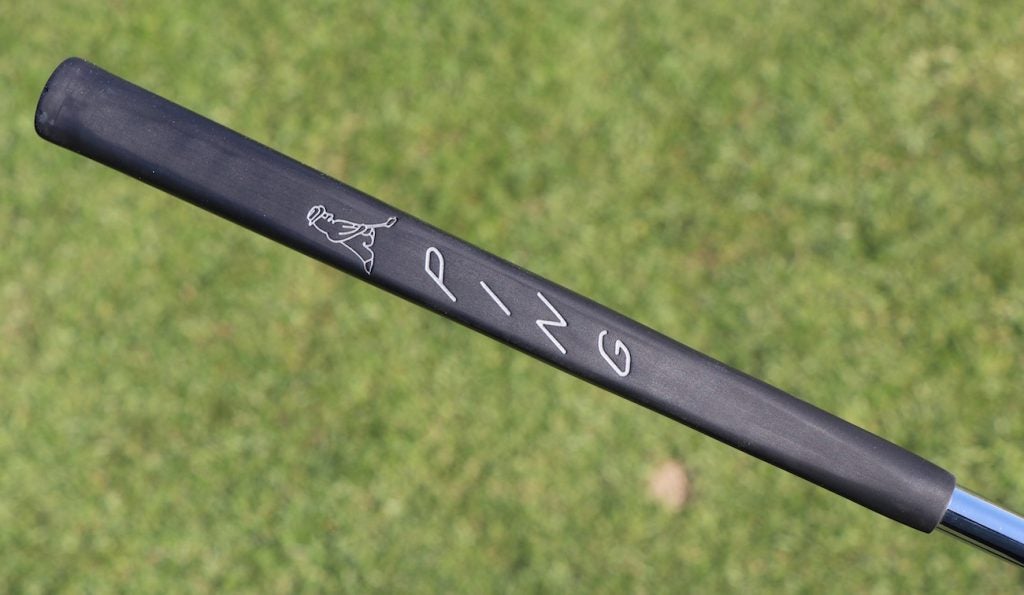 Like another former World No. 1 golfer, Duval also uses a Scotty Cameron putter head equipped with a Ping PP58 putter grip. Both Tiger Woods and Duval have been using this mashup of manufacturers for years, and it doesn’t seem that either one will change that up anytime soon. 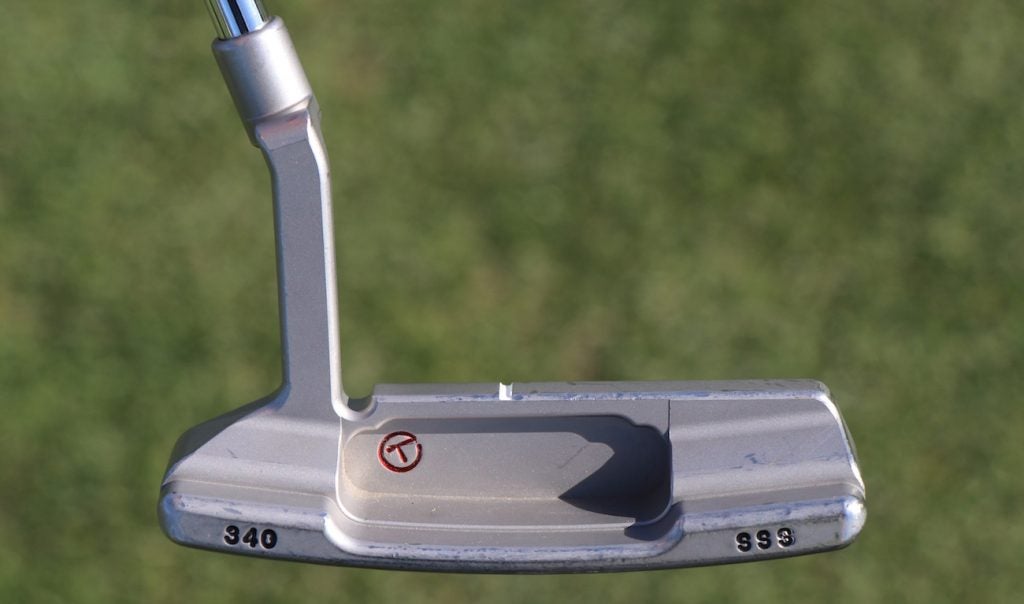 While Duval uses the same putter grip as Woods, Duval’s putter head is a bit different. He uses a Scotty Cameron Timeless 340 SSS putter with deep milling marks on the face. Duval also uses a single white line for his alignment aid, while Woods opts for a single red dot.