‘I don’t like to play for fun’: LPGA star explains aversion to recreational golf 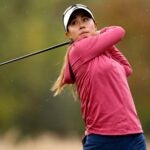 Danielle Kang tees off on the 3rd hole during the first round of the CME Group Tour Championship on Thursday in Naples, Fla.

Actually, Kang is a good player to ask about virtually any topic, because you’re likely to get a refreshingly honest answer. The world No. 11 and five-time LPGA winner tells it like it is, or at least her version of how she thinks it is.

The latest reminder of Kang’s candor came Wednesday at the LPGA’s season-capping CME Group Tour Championship, in Naples, Fla., when Kang was asked about how much she loves golf.

“I really love golf,” she said. And then here came the candor: “I used to not, but I have learned to love the game in the last few years and I am obsessed with it. I’m trying to figure out a way to fail better at this point because I fail every day. I’m trying to figure it out, and I can’t figure out this game. … For me, I think my new goal to fail better every time I fail.”

Good advice for all, whether you’re a golfer, a gardener or a grocer.

Kang was then asked whether she likes to get out on her off-weeks and just play for fun.

“To be quite frank, I don’t enjoy playing recreationally,” she said. “I don’t really like to play for fun. I love competition. I like being able to score what I did, didn’t do well, and be better and try and work towards a goal. Golf is stressful enough that I really don’t want to play for fun. It is really not fun when I make bogeys. So, me trying to stress and try and birdie when I’m playing at a random golf course doesn’t — it stresses me out.”

Kang’s certainly not the first player to admit she doesn’t like to play golf for giggles. Jack Nicklaus was once asked if he liked to play for fun. He replied — we’re paraphrasing here — that yes, he does, but his idea of fun is walking up the 72nd hole of a major with the lead. More recently, Brooks Koepka has referred to golf as “boring,” telling Golf Digest in 2015 that if he could do it all over again, he would have played baseball. In other words, you won’t likely catch Koepka jetting off to Bandon for a long weekend with his boys. Same goes for Kang. Golf — ultra-competitive golf, that is — is her profession and one to which she has committed her life. There’s not room for much else.

“I think I’m sometimes so obsessed with eating right, sleeping right, working out, living and breathing just to play good golf that even if I do everything correct, my results are not where I want it to be,” Kang said.

That kind of dedication doesn’t allow for low-key, messing-around golf. Heck, it barely allows for any downtime, which, Kang said, means sometimes she has to dig deep to enjoy some of life’s other pleasures. “I don’t want to miss out sometimes on life because I’m tired. Who isn’t tired?” she said. “Everyone is always tired for some reason. I even went to a Tampa game last week and watched a couple of my friends play, Tampa Bay Lightning. I just want to be able to live.”

This week, in Naples, she carved out some time to hit the beach with pal So Yeon.

“It’s literally four miles away, so I just went to watch the sunset,” she said.

Then it was back to the stresses of Tour life. Begs the question, does Kang carry too much stress?

Nope, quite the opposite, at least not when she’s on the job.

“It’s weird,” she said. “I like the stress. I like it because it’s my job and something I do and love to do, but at the same time, when I’m at home I don’t want to be even more stressed out and apply more stress onto myself when I don’t have to. I think that’s why I say I don’t really like to play recreationally. If I have other things to do, whether it’s to go to a game or go watch my friends play a game, anything like that that I don’t have to be involved in in my work, I try to opt out of it. Rather do anything else than go and play golf for fun.”