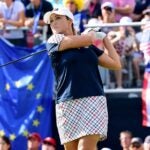 Cristie Kerr has an 18-14-6 record in her nine Solheim Cup appearances, and her 21 points is the most among U.S. players.

Golf has a lot of unwritten rules, one of them being: don’t mess with Cristie Kerr. In a sport with a rich roster of unflinching competitors, few players have been tougher under pressure than the 43-year-old LPGA veteran, whose resume includes 20 wins, two major titles and multiple stints as the top-ranked woman golfer in the world. A stalwart on many stages, Kerr has left perhaps her deepest mark in the Solheim Cup, the biennial team contest between the United States and Europe. In nine career appearances, Kerr has notched a total of 21 points, more than any other American player. Along the way, she has experienced the full swing of the emotional spectrum, from the euphoria of heroic comebacks to the devastation of injury and defeat.

In advance of this week’s Solheim Cup at Inverness Golf Club in Toledo, Ohio, we caught up with Kerr, who’ll be watching the event closely from her home in Florida, to ask about her favorite (and least favorite) Solheim memories, her keys for handling the stress of the competition, and what approach she would take as captain, in the high likelihood that she gets to fill that role.

GOLF.com: We’re always told that there’s tournament pressure and there’s Solheim Cup pressure, and they’re not at all the same. Was that true for you? And if so, how did you deal with it?

Cristie Kerr: It’s definitely different. Everything about the Solheim Cup — the atmosphere, the expectations, the team element — feels different. It’s intense. In your first one, you almost can’t play golf because you’re so intimidated by everything. Over time, I learned to have some perspective about the event. I learned to have fun with it instead of fearing that pressure. But that probably wasn’t until my third or fourth one.

Was there any one moment that was key in helping you turn the corner?

Not really. It’s just a learning process you have to go through. But I do remember my first match ever, at Interlachen, in Minnesota. I was paired with Rosie Jones against Sophie Gustafson and Laura Davies. It was an intense match, and I remember Rosie coming up to me and saying, ‘You’re nervous? Good. Use it!” That was helpful advice.

When it was your turn to play with younger players, was there any advice you gave them?

You know, not really. Usually, I was the rookie. And if I did get paired with a rookie, it was more about just getting fired up or focused or to stay positive and not worry about the stage you were on.

What about basic advice, like how to best prepare for a match. Did you do anything different to get ready for the Solheim Cup?

You definitely worked on short game and putting a ton more because that is just so important in match play. With my record, maybe I should have taken that approach all the time. [Laughs]

You racked up a lot of Solheim Cup memories. Any that stand out to you?

Oh, there have been highs and lows.

Which would you rather get to first?

The low was definitely Ireland in 2011. I’d developed such bad tendinitis in my right arm, I couldn’t even lift a straw. I’d played in the early matches. But I was taking so much medicine and in so much pain, I was hyperventilating, I was really out of it. The medics took me into a room and wouldn’t let me leave. I couldn’t even go out to the first tee and concede. I had to pull out and we lost by a point. It’s hard to describe how bad that feels to have your team look at you like you had cost them the Solheim Cup.

Do you really think that’s how your teammates looked at you? That they blamed you for the loss?

I think that’s how they looked at it before they knew the whole story. That’s how a lot of people saw it at first. People thought I didn’t want to play. But the truth is I was not allowed to leave the team room. My blood pressure was through the roof. I was in physical distress. I probably should have gone to the tee first to concede before I saw the medics. But that’s not how it worked out. It was very tough. At the same time, my thinking was that I wouldn’t have wished the experience on any of my teammates. I knew how strong I was. I knew I could take it and that I’d recover. And I would rather take the hurt than have that pain go to someone else. That was a unique perspective that came from all of that.

Luckily, you’ve had more highs than lows. What are some of the greatest memories?

The high point was probably in Germany in 2015 when I started badly in singles against Charley Hull, 3 down after four holes and then going on to win 3 and 2. The heroic feeling of contributing to that massive comeback definitely stays with me. Also in Des Moines, paired with Lexi (Thompson), being 2 down with two to go and coming back to halve the match was incredible.

As amateurs, we’re often told that we should never apologize to our partners. Is the same true at the elite level?

No. You might apologize. Sometimes, it just slips out, and that’s okay. But you better get over it quickly. You can say sorry, but you can’t feel sorry for yourself. You got to get right back on the horse.

So much is said about the chemistry in pairings. Did you have any favorite partners?

I had so many great painters. But Lexi and I had a really special one. We had that south Florida connection. We’d both worked with Jim McLean. I was older than her so maybe she looked up to me a bit in that regard, and I respected what a tremendous talent she was. Sometimes, though, you don’t know chemistry until you actually put someone in a match together.

Any captains that you think handled pairings or team room atmosphere especially well?

Everyone had a different approach and brought something different to the mix. Rosie was very intense. She wanted to use the nerves to your advantage. Meg (Mallon) and Beth (Daniel) were more like, ‘Just go out there and believe in your talent.’ Juli (Inkster) was more more like, ‘Time to put your work hat on.’ One year, she actually got us hardhats as gifts.

Any other keys to good leadership?

I think there’s a lot to understanding personalities. Juli even put us through personality tests to see who would be most compatible. She was very open about that.

What did your test show?

That I am an extrovert with a high level of dominance. And a low level of conformity. In the end, I think, the Solheim Cup is a lot like life. People will gravitate toward people they’re comfortable with. Just like in high school cliques in the cafeteria. Same thing in the team room. You want people to feel comfortable together.

How do you think you’ll handle the role, assuming you get to be captain?

I don’t think you know until you’re actually in the role. But you have to find unique ways to inspire the players and help them enjoy the moment. You want to basically get them to take it seriously, but not so much. Get pumped up but channel the nerves. It’s a balance. But in the end, you just want to get them feeling comfortable and safe and excited to play.