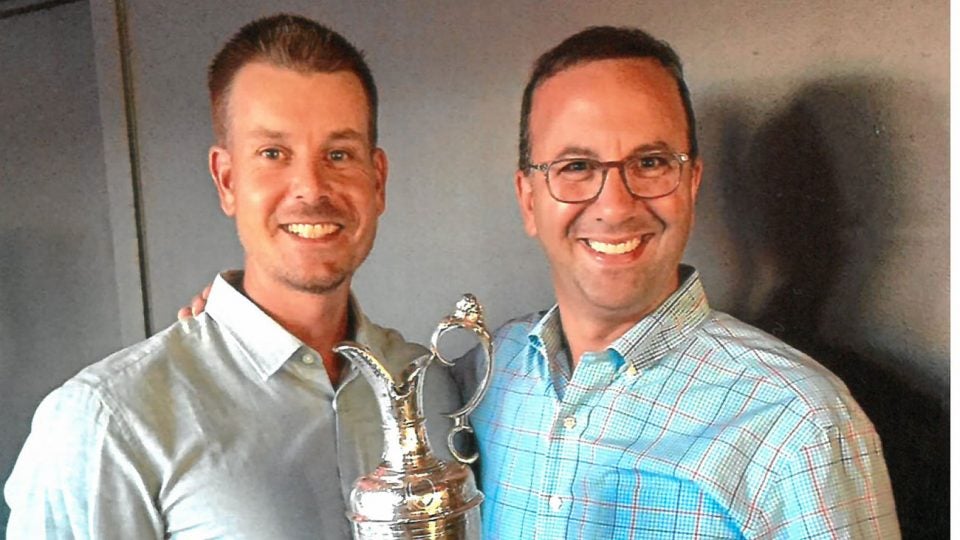 In professional sports such as football and basketball, the players can rely on the support and structure or the team and dozens of specialized employees who coddle, protect, educate and promote them. Golf is unique in that the athlete must build his or her own team. On the PGA Tour the relationship between a player and his agent is particularly intense and intimate.

In the wake of my spiky podcast with Ian Poulter, I had a chat with R.J. Nemer, the man who has guided Poulter’s career for the last decade. Among the ways Nemer has coped with such a high-maintenance client is with the liberal use of his proprietary acronym D.B.A.C., which he trots out whenever Poulter is acting difficult. It stands for “don’t be a c—.”

For 17 years Nemer ran the boutique agency Icon Sports, building Poulter’s brand and overseeing the career of Henrik Stenson, among others. Icon was absorbed by industry heavyweight WME-IMG in 2015, and Nemer now holds the title of senior vice president/head of golf clients. We sat down at Bay Hill for a wide-ranging conversation about a very unusual job.

Shipnuck: How does one become an agent on the PGA Tour?

Nemer: I did it in a very nontraditional way. I was always intrigued by what I thought was the industry. I played golf as a kid and went to tournaments with my dad. Going back 20 years to when Tiger came out on Tour, I noticed that the excitement and the demographics were changing based on what this one person was bringing to the sport. So I thought it would be a good time to enter the industry. At the time IMG was world-headquartered in Cleveland, which is where I’m from. I interviewed with them, but at the time I wasn’t interested in working at such a big company. So I began practicing law and did that for a couple of years. Then I realized I really hated what I was doing. So I wrote a business plan and as a 30th birthday gift to myself I resigned from my job, and I went to my parents and asked if I could move into their basement to start a sports agency. My dad wanted me to go talk to a psychologist, but I kept assuring him I was fine. So I started an agency in their basement, not knowing anything about the industry. By happenstance I met a bartender in 1997 while I was out with some friends from law school….

This story’s getting better.

…and the bartender graduated from Duke and played on the golf team. And he said, “I graduated with a guy who just got his Nike tour card. Do you want to meet him? His name is Joe Ogilvie.” He put me in touch with Joe. I flew down to Tampa, where Joe was practicing. I explained to him what I was trying to do. And he’s like, “So you quit your job? That sounds kind of risky. How long are you gonna give this?” And I said, “Well, I figure I’ll know in six months if I can make it.” And he said to me, “O.K. Do you have a representation contract?” And I said, “No, I haven’t gotten around to drafting one. But if you shake my hand, we could try it for six months and see where it goes.” I managed him for 16 years on that handshake. And the whole time I had Icon, I never had a signed contract with a player. So Poulter and Stenson and all these guys came in on handshakes. And I took that group of clients with me to WME-IMG on handshakes.

What is the difference between an agent and a manager?

In golf the terms get used pretty synonymously. In entertainment, an agent will do more transactional broker-type opportunities where a manager becomes more involved in the day-to-day nuances or scheduling of talent. In golf we wear both hats. Some players require more than others. And the balance shifts depending on what’s happening on a given day or a given cycle. The agenting may come in more specific times of the year when we’re doing contract renewals or we’re negotiating a new deal, whereas the management side is more day to day: actually being there and supporting the wishes and the goals of a player and trying to take as much off of his plate as possible so he can perform on the golf course.

What’s your best story about having to deal with a client’s whims?

I remember one story from very early on. It was a particular client and not a current one.

Just give me his initials.

I won’t go that far. It was shortly after 9/11. The FAA had changed a regulation so you could no longer bring a vehicle onto the runway of a private airport. Before you could get off the plane and there would be a car parked there, and there’d be very little walking. But now you had to get off and come through the terminal and then go to your vehicle. So this player’s wife was traveling. I left her a voicemail that the car was waiting but she would have to go through the terminal to get to it. She called me back absolutely furious. She said, “Do you have any idea how difficult it is to travel with a child and a nanny?” Keep in mind she’s flying privately. And I thought, No, I really don’t.

This brings us to Poulter. What are the unique challenges of managing his career?

It’s unique in the sense that it’s so nontraditional. There’s never really a lull in activity because he keeps ideas flowing. He keeps wanting to invent or reinvent opportunities or concepts or experiences for his corporate sponsors or to interact with new sponsors. So it’s never a static situation with him, which I love. If he’s not calling or emailing or texting about something new that he wants to explore, then he’s not feeling well. Something is wrong.

How much do you get into the social media lives of your players? Because that can make or break their brand in a lot of ways. Obviously, Poulter is an extreme example. But where does a management team fit into a player’s social media?

I encourage players to be authentic. We don’t ever want it to look like a player is continually pitching something because that doesn’t inspire people. By the same token, it’s that sort of robust, shoot-from-the-hip, passionate kind of talk that has resulted in (Poulter’s) having over two million followers. It’s a fine line. You want a player to be who he or she is. You don’t want to stifle that. But you want to make sure that it’s not hurtful or offensive to anybody.

Yeah, Ian told me in the podcast, “I’ve made a lot of mistakes. And I’ve damaged myself.” He sounded regretful. How much have you counseled him along the way? And have you ever threatened to take away his phone?

Oh, yeah. Many times. And sometimes we were successful in getting it out of his hands.

You can probably relate to President Trump’s people, right?

He is who he is. And have we gotten in arguments about it? Absolutely. But that’s part of managing him. And that’s part of, you know, being on this journey together. Nobody goes through life with an immaculate record. So has he done things that he probably wishes he wouldn’t have said or done? Of course. But we all have. And I think people embrace that human side of him. I think people are kind of hungry for that authenticity. That’s what he gives. I think that’s refreshing for some people. And, like I said, it certainly might anger or hurt some people along the way, which is regretful. He doesn’t like hurting or alienating people. Unfortunately sometimes that happens when you’re that real.

Stenson is a very different personality, obviously. I’m wondering how he dealt with the attention that comes with winning a major championship, especially in that kind of spectacular fashion. How intense did it get?

The media interest and the opportunities were immense. Henrik had commitments immediately following his Open Championship win, and it would have been much easier for him to throw up his hands and say, “I just won the Open Championship. Get me out of this stuff.” But Henrik is probably the most disciplined person I’ve ever met in terms of how regimented and how committed he is to following through with what he says he’s going to do. So we had all this interest and he very much wanted to not let anybody down. He is probably one of the most sincere and genuine people out here. At the end of the day, he will always do what’s right, even if it’s not what’s easy for him. I think that makes him a bit of a rare bird.

How much do you feel like you play a part in the success of your players? When Henrik wins the Open Championship, is there a feeling of accomplishment for you too?

Honestly, no. There is pride and happiness for him. But I always feel strange, and it happened after the Open Championship, when people congratulated me, because I didn’t hit a shot. It’s my job to try to take everything off of his plate so he can perform to his highest capability. But do I think I have anything to do with it? No. Because every agent, every manager is trying to take things off of their clients’ plates. I never get hung up on that. My weight in the industry, my notoriety in the industry, everything that we are as a manager or an agent is directly tied to how our clients perform on the course. And you rise and fall with them. But I don’t hold their accomplishments any more as my accomplishments than I do their defeats. I just try to be as consistent and supportive during all of those times. For Henrik, having signed him when he was 200-something in the World Ranking and to know what he had to do and the sacrifices he had to make to achieve that victory, it was in the most genuine and true happiness for another person’s accomplishments. Particularly someone I care about very much and who is important to me as a person and a friend.

Was there any kind of thank you that trickled down from him after that win? Does he send you an engraved watch?

He’s not that type of guy. You do have some clients who send gifts, which is nice. I had planned to leave the Open Championship before the final round because I needed to be home for a family commitment. I flew out on Sunday morning, which was horrendous for me. I had dinner with Henrik on Saturday night and I could tell he was amped up for the next day, but you never know what’s going to happen. I was connecting on the way home, and I watched him win in the United Club at Newark airport. It was packed, and people were cheering. It was amazing. When he won, I felt tears develop in my eyes because I was so happy for him and it was so hard not to be there to be able to share that with him. So I texted him something to the extent of, “I’m so happy for you. I’m so proud of you. I wish I could have been there.” He texted me back almost immediately and said, “You were here.” That meant more to me than any watch or anything he could have sent.