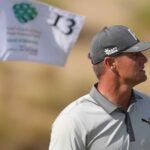 Bryson DeChambeau withdrew from the Saudi International earlier this month.

Bryson DeChambeau isn’t in the field this week at the Genesis Invitational at Riviera Country Club, and with ongoing rumblings of a Saudi Arabia-funded breakaway tour approaching players, rumors began swirling on social media that DeChambeau, who as GOLF Magazine’s playing editor pens a monthly instruction column, had reportedly said he wouldn’t play in any more PGA Tour events.

Later, the 2020 U.S. Open champion shared a statement on his social media accounts reiterating the message.

DeChambeau missed the cut in his most recent PGA Tour event, the Farmers Insurance Open, and withdrew from the Saudi International earlier this month prior to his second round, citing an injury to his left wrist and hip. The eight-time PGA Tour winner is due to defend his title at Bay Hill starting on March 3, but DeChambeau has reportedly been nursing a tear in his labrum, which can carry with it a recovery time of four to six weeks, putting that start in doubt.

DeChambeau is one of several players who have been reportedly linked with the Saudi-backed Super League. DeChambeau called reports earlier this month of $130 million to join the tour “false,” and his agent also refuted that message on Monday.