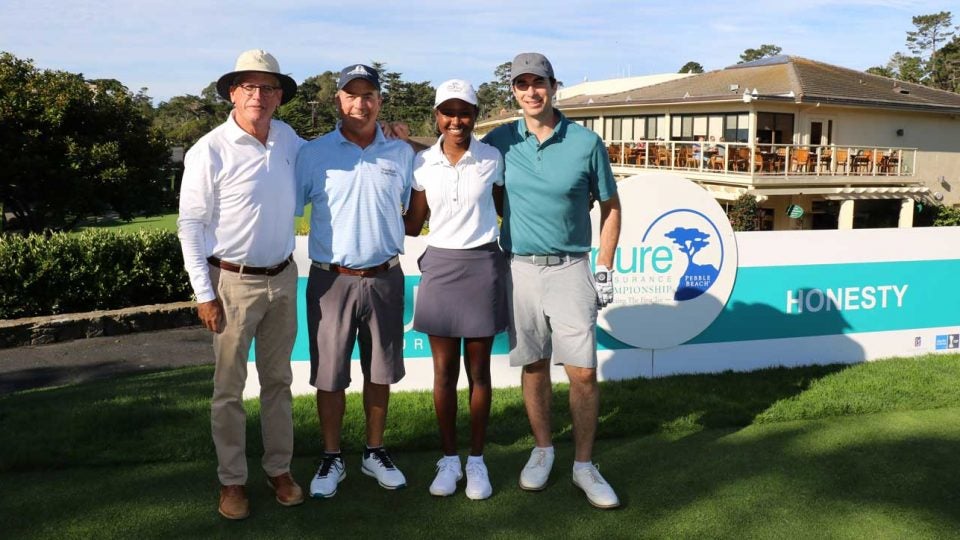 PEBBLE BEACH, Cal.— There is nothing life or death about the Pure Insurance Championship. The pros on the Senior circuit are enjoying sport’s ultimate mulligan. The well-heeled amateurs playing alongside them are thrilled to walk in the footsteps of golf royalty. The giddy First Tee kids from all over the country give the tournament its heartbeat. But for a few of these teenagers, this week’s trip to Pebble Beach is the culmination of a long, hard journey. They’ve seen how fragile life can be, and in the face of wrenching hardships, golf helped show them the way forward. At a tournament dedicated to spotlighting what is still good about the game, Shani Waite, Luke Boldt and Jackson Boldt stand out as shining examples of golf’s redemptive powers.

Shani was just a little girl when her 9-month-old sister Simone died. Already petite and introverted, Shani disappeared into herself after the tragedy. At age 6, she found the First Tee of Los Angeles and it became a place of reinvention. “It was a really rough time for me and my family,” she says,”but at the First Tee nobody knew my story so I could be who I wanted to be. It gave me an outlet to open up to people. That environment made me more confident. It taught me how to be myself and make connections with other people.”

None of her friends or family played golf but Shani was fascinated by the mysteries of the swing, her interest nurtured by a supportive network of staffers. The game became a form of self-expression. “When you’re a kid and you learn how to make the ball curve it’s like you’ve discovered a superpower,” she says. The freedom and creativity with which she played the game dazzled her parents. “It unlocked a whole different side of her,” Soroya Waite says of her daughter. “After her sister passed, Shani wanted to control everything. She became a perfectionist to the point where it probably wasn’t healthy. But you learn real quick you can’t be perfect in golf. Just playing the game taught her so much about overcoming challenges.” 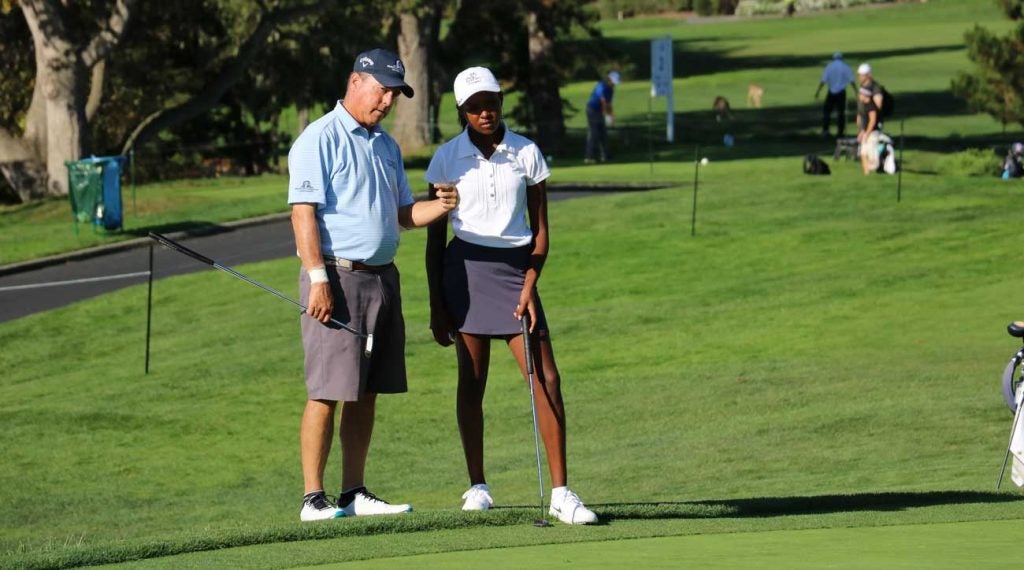 Along the way Shani, a senior at Mira Costa High in Manhattan Beach, has become a low-key agent of change. When she was 13 she won one of the toughest flights at the L.A. City Championship, becoming the first African-American to do so. A Girl Scout and an honor student, she is now deciding which college she would like to play for, with designs on making it to the LPGA. “But if that doesn’t work out,” Shani says,”I know golf will remain a huge part of my life one way or another. Once it’s in your blood, you know?”

The game has always been part of the daily ritual for identical twins Luke and Jackson, along with riding the family horses and milking the cows. By age four they were regulars at the First Tee of Coastal Carolinas, in Shallotte, NC. Eventually, the family built their own driving range into the horse pasture on their 12-acre farm. The boys pick the range themselves but, alas, their motorized cart tends to gather more than just the balls.

“We have to siphon out the balls from the manure,” says Jack.

“It’s messy,” says Luke,”but worth it if you want to hit more balls.”

The boys are what is called mirror image twins: Luke swings the golf club as a lefty but writes and throws right-handed while Jack is a righty in golf but throws and writes left-handed. How they approach the game is also different. Jack, the more gregarious of the two, is an aggressive, go-for-broke player, while Luke is cautious and calculating. They’re equally skilled fishermen at the fishing holes on the family farm — where there is also a zipline and ATVs — but Luke is the more accomplished swimmer for South Brunswick High School while Jack is more adept at two-man calf roping. 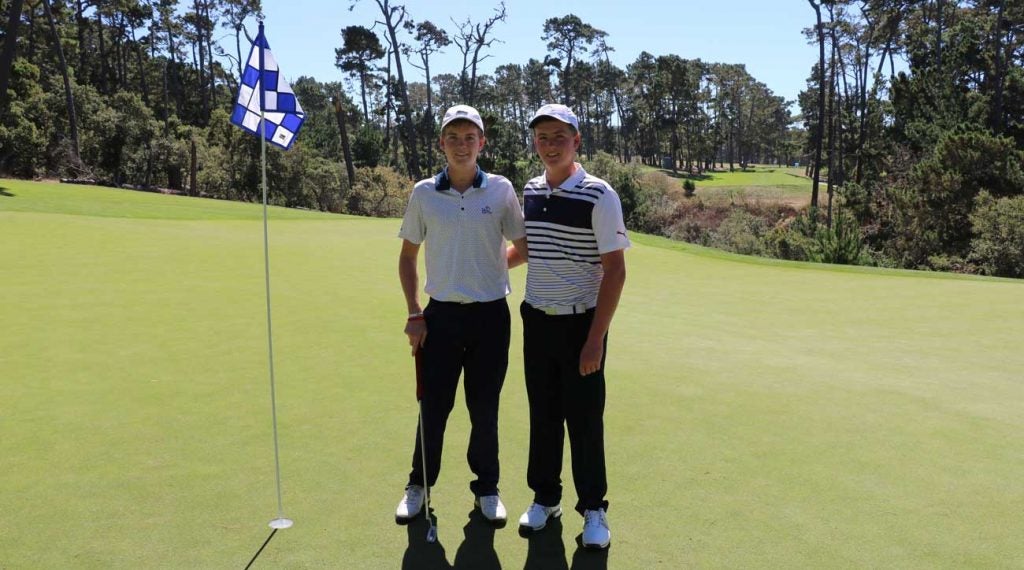 In the summer of 2017, the boys’ idyllic country life was shattered on a family trip to the Midwest. They were being driven by their grandparents, Del and Patricia Boldt, when an awful car accident ensued. Del and Patricia were killed. The boys were airlifted to Children’s Mercy Hospital in Kansas City. Both had broken backs and a variety of other serious injuries. Luke was in a coma for eight days. “We nearly lost him a couple times,” says their father Terry, his voice thick with emotion. Golf became central to their comeback. The nurses papered their hospital rooms with pictures of their favorite golfers, Jordan Spieth and Dustin Johnson. The Open Championship telecast broke the gloomy silences. When Luke and Jackson were finally able to leave their rooms, their favorite spot to gather on the grounds became at the foot of the statue dedicated to the patron saint of Children’s Mercy, Tom Watson.

“Golf gave us something to focus on, something to look forward to,” says Jack, who was chipping and putting while still on crutches. After having metal rods inserted into his back and screws in his ankle, he didn’t miss a match for his high school team, where the brothers have helped build a mini-dynasty. Luke’s recovery has been more arduous. He’s had 29 surgeries to date, of which he says ruefully,”That’s gotta be some kind of record.” A nasty infection forced doctors to remove portions of his abdominal muscles. “I can’t do a sit-up to save my life,” he says. Core strength is important to the golf swing but Luke is proof that it ain’t everything. “There’s a lot of ways to do it,” he says, and he smashes the ball off the tee, just like his brother.

Travel
The Best Spots in Golf: Go inside the Pebble Beach Tap Room

Until this week Shani had never met the Boldt — both of whom just finished their Eagle Scout training — but she knows the type. “You meet so many good people in the golf world,” she says. Her journey through the game is a story of inclusion, from all the guidance she received at the First Tee to the scholarship given to her by Urban Golf Performance, a high-tech swing and mental coaching center on the edge of Japantown in L.A. Golf has taken this city girl as far away as Rhode Island but she couldn’t hide her delight at being at Pebble Beach for the first time. On Tuesday she played a practice round at Poppy Hills with Olin Browne, who offered the following scouting report: “She has a beautiful swing, hits it hard and straight and is grinning from ear to ear. What’s not to like?” He enjoyed Shani’s company so much he invited her for another practice round the next day at Pebble Beach. If Shani seemed utterly at ease alongside the U.S. Senior Open champ it’s because is used to the mentor-mentee dynamic, albeit with the roles reversed. She dotes on her 12-year-old sister, Serena, and remains active with the First Tee. “I know those little girls are looking up to me and they see how far golf has taken me so I love to encourage them and set a good example,” she says.

The Boldt brothers also believe in giving back. Having to learn to walk again gave them a newfound empathy for kids with special needs, so at the First Tee of Coastal Carolinas they have founded “Buddy Tee,” a program that teaches adaptive golf to kids with physical and developmental challenges. Both Luke and Jack light up talking about some of the youngsters they’ve helped.

This sense of community service imbues the Pure, to which the brothers — high school seniors — have brought a divergent energy. Jack sees the tournament as a victory lap to his golf comeback; his dream is to make the rodeo team at North Carolina State. “I’m just smelling the roses,” he says. Luke’s goal is to play at the next level so he was grinding hard at Pebble Beach, treating it as a potential showcase for college recruiters. It remains to be seen how far golf will take him, but Luke already has a backup plan: to be a trauma surgeon. Last year he returned to Children’s Mercy to shadow the doctors who operated on him. Both boys addressed the medical personnel who pieced them back together as part of a case study on long-term rehabilitation.

“There weren’t too many dry eyes when the boys were done speaking,” says Terry.

Luke laughs about their status at the hospital. “We’re case studies!” he says. Aren’t we all, in some way or another? All three of these remarkable teens offer hope that happy endings still exist.