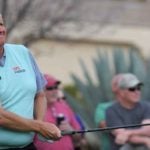 The PGA Tour is planning to return from its coronavirus hiatus on June 11.

“To think about starting up in June is very optimistic, to say the least,” the longtime pro told the Scotsman. “All sorts of different scenarios have to come into play, but I just can’t see it.”

In announcing when the PGA Tour would resume play following a hiatus that started in mid-March, commissioner Jay Monahan said the Tour would need to test players, caddies and others involved in tournaments before events could start and would “need to do so in a way that’s not going to take away from the critical need that we’re currently facing.” The Guardian recently reported that the Tour would need up to a million tests to complete its season, though a Tour spokesman denied the figure.

“If they are going spare, then by all means,” he told the Scotsman. “But you do feel that somehow those million tests could be used for frontline workers more than for us. Everyone is not getting tested yet, and frontline staff around the world should be tested first before we get anything.”

Montgomerie was also concerned with the different levels of government. Cities and states across the country have enacted different restrictions due to the coronavirus, and Andy Pazder, the Tour’s chief tournament and competitions officer, said the Tour would work with all local, state and federal health regulations.

Another issue, Montgomerie said, was how international players would be able to travel to the U.S. under coronavirus travel restrictions. Andy Pazder, the PGA Tour’s chief tournament and competitions officer, has said there are about 25 Tour players and 35 caddies who face that situation, and that the Tour is “paying very close attention to if and when those restrictions are changed.”

“I can’t fly to America,” Montgomerie, a native of Scotland, told the Scotsman. “Even if I wanted to self-isolate over there for two weeks, I can’t do that, as I’m not allowed in. That has to lift before anything, really.”

Montgomerie also wondered what would happen if anyone associated with the Tour tested positive.

When the Tour announced its return, Tyler Dennis, the Tour’s chief of operations, said “that question is not something I can answer yet, but it’s something we’re evaluating closely.”

“We are first to go and, if it does spike up or go wrong – if one of the players contracts this virus or one of the caddies or volunteers among the 600-odd people they say have to be on site at these tournaments even without a crowd – what happens then?” Montgomerie said to the Scotsman.

6 burning questions for the 2021 LPGA season (and, yes, we answered them!)