PINEHURST, N.C. — Mississippi kid Cohen Trolio is 17 years old, staring down a USGA record and exemptions that would change his life. Is he feeling the pressure?

“Not really,” Trolio said Friday after another victorious match at the U.S. Amateur. “I do this every day. I mean, I play golf every day.”

He’s not wrong, and while Trolio might feel like what he’s doing is normal, it is anything but. He’s a rising junior. A high school junior. A junior in the sense that he still plays junior events. This U.S. Amateur is his first true amateur event, and he hasn’t trailed in any of his four matches thus far.

If he is to win, he would probably be the most surprising champion in the history of the U.S. Amateur. At just 17 years and eight days old, he’d smash the record for youngest champion by more than 11 months. The fact that his Friday opponent had a full beard reiterated the point. The kid is young, and still baby-faced.

Trolio is not ranked in the world amateur golf ranking — that will come later — and he’s not even highly ranked in the American Junior Golf Assoc. ranking (119). All of this is to show that, again, his performance this week is simply not normal.

Those practices often involve some elite players. With his father, V.J., employed as the teaching pro at Old Waverly Golf Club — site of last week’s U.S. Women’s Amateur — he’s teed it up with a number of Korn Ferry Tour players. He’s also played a bunch with five-time Tour winner Jim Gallagher. According to Trolio, the 58-year-old Gallagher “still can put on a fight, but I got him once or twice.” Gallagher, meanwhile, is, as they say in the South, happier than heck.

Well I’ve worn a hole out in my carpet this afternoon watching ⁦@cohen_trolio⁩ win his match 3&1. Tomorrow’s Match 1 will be a All-Mississippi Semifinal vs ⁦@andy_ogletree⁩ pic.twitter.com/hKLI1ZGcgG

So while none of what Trolio is doing seems to classify as normal, it’s possible we could have seen parts of it coming. V.J., who is caddying for his son this week, has authored a book titled, Only One Shot: Creating a Disciplined, Defined and Loving Environment for Junior Golfers. Parents at home, you can buy it on Amazon. That same father refuses to buy his son a 60-degree wedge. It’s an act of principal.

“I think Loren Roberts and I think Jim Gallagher told Dad that … if you have talent, you don’t need a 60- degree,” young Trolio said. “You’ve got to learn to chip with not something that just sits on the ground wide open for you.” 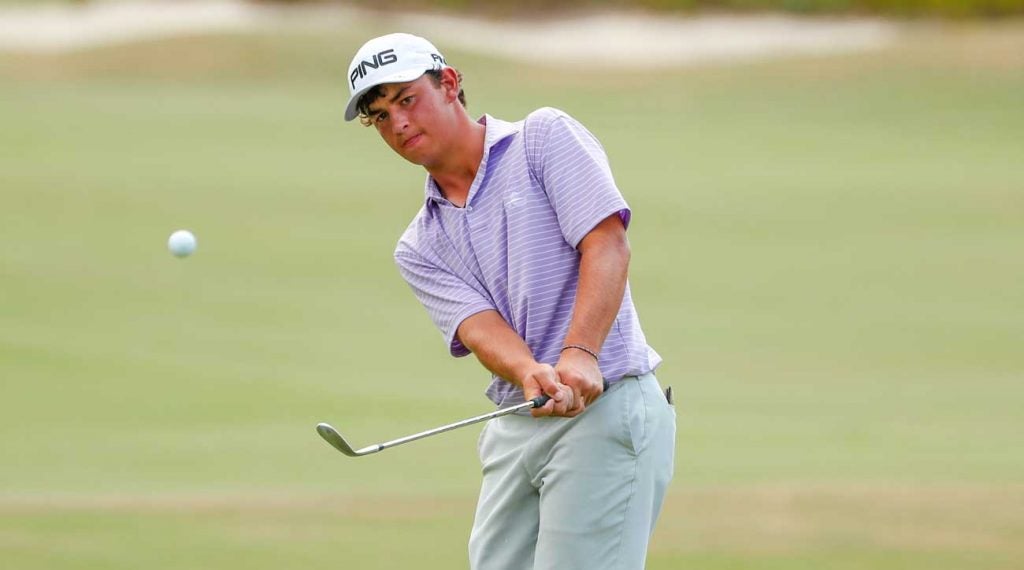 Cohen Trolio has made it very clear, he doesn't need a 60-degree wedge to get up-and-down all around Pinehurst.
Courtesy USGA

That is plenty good here in central North Carolina, where a once-stacked field for the biggest event in amateur golf has fallen into a free-for-all for lesser-knowns. Of the four players that remain, Trolio seems to be the most Cinderella-like. A confident Cinderella who answers questions like “what does this mean to you,” like the 17-year-old that he is.

“It’s cool,” he said. “It’s crazy, but it’s awesome, and I know that I’ve still got a couple more steps to go, so we aren’t getting too crazy excited. But it’s cool.”