Strange, powerful forces — in this case the PGA Tour and CBS Sports — had to work in tandem to produce a person as spectacular and unique as Chuck Will, who died in his home outside Philadelphia, some hours after the Eagles’ victory over the New York Giants Sunday afternoon on FOX. Will’s TV was tuned to it, but only because there was no golf to watch on CBS. He was 91.

Chuck Will had various official titles over his decades with the only network for which he worked, but his main role in his adult life was as the alter ego to Frank Chirkinian, another son of Philadelphia and the man who all but invented golf on TV. If you like the Masters on CBS, you are admiring Chirkinian’s work and the legacy of it. Only some would know that it was Chuck Will who got the broadcast out of the CBS production truck and into your living room. He did it with a force of personality the likes of which will never be seen again. Ask anyone who knew him.

All through golf, or at least in a certain segment of it, there were tributes in the wake of the news, some public, most otherwise. Will’s caustic humor and immense insight into people left an indelible mark on all who knew him. If you happened to see Jim Nantz, flying home after working the Steelers-Patriots game in Pittsburgh, you would have seen a man raining tears. But also from scores of other CBS golf people, active and retired, he hired, inspired and befriended over the years, including spotters, cameramen, producers, statisticians, announcers, electricians, gofers, boom operators and the rest.

The people Will hired and knew in the game came from every walk of life. He had a particular soft spot for down-on-their-luck caddies and he could see in the game’s stars — Nicklaus, Palmer, Floyd, Faldo, Woods — both their foibles and their inherent greatness. Will was as clear-eyed as a man could be. That’s why Chirkinian depended on him so. Will hired and groomed the man who eventually took over Chirkinian’s role, Lance Barrow.

Last year, Will, in an interview with Sports Illustrated, shared some insights into two golf icons, Chirkinian and Palmer. He said, “Arnold was built for the camera. He was flamboyant. He walked off that tee and he was striding. He was leading and he was going to win again. But they needed somebody to put that camera on the guy’s face and know exactly how long to leave it there, and that guy was the little Armenian.”

Will had a nickname for every person he knew, and that was what he called Chirkinian. He called Earl Woods “The Colonel,” Clifford Roberts “The Old Man,” and Gene Sarazen “Squire.” (Not “The Squire.” Other people used that.) Over the years, and later aided and abetted by David Feherty, Will developed a whole bit, rooted in reality, about the different types of “a–holes” that populated the PGA Tour. He was profane but his vocabulary was precise and his grammar was perfect. 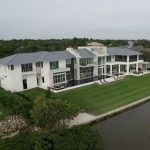 You may also like Masters 1958-66: The era that made the Masters was as good as it got
​Chirkinian’s domain was the art of the golf broadcast, the storytelling that is at the heart of any live sporting event. (The two men also produced U.S. Open tennis for CBS for years.) The mechanics of it all fell to Will. His own father was a rear admiral in the United States Navy and Will inherited the ability to roll with whatever came, to expect the unexpected. (Bad weather, golf balls hit into odd places, slow play, boring leaders, blowout winners.) He was a TV natural, even if his training for it had been as a cardboard-box salesman.

Chuck enlisted in the Navy at age 17, during World War II, and served on the USS San Juan in the South Pacific.

He earned seven battle stars. He knew a world far more demanding than anything the PGA Tour or its broadcasts could ever require. With the lights on, he was cool, even if the tournament unfolding before him was not complying. When the Army-Navy game was played in Philadelphia on Dec. 14, the CBS broadcasters had a nice shout-out to Will, while remembering his father, too. Twenty years into retirement, he was not remotely forgotten.

Charles Edward Will, a trim and dapper man, came up in a different time. He got by on his wits, his wit, his storytelling, his candor. He knew what he was: a high-class Philadelphia golf bum who had found a home in the Directors Guild of America. He could play, and he competed in one U.S. Amateur. He once shot 65 in a Philadelphia tournament. The local golf writer wanted to write up Will and his subpar round. Will said, “Talk to somebody else.” He had taken a slide from work.

It was Chirkinian who got Will to stop drinking and it was Will who could tell Chirkinian what was really happening on Tour, even when the boss didn’t want to hear it. Likely nobody knew more about the Tour’s underbelly than Chuck Will, because so many of the caddies were indebted to him — literally — and they told him about the life on Tour as it existed beyond the reach of the CBS cameras. How exactly that informed and improved the network’s coverage is impossible to say. But it did.

Anticipating the final chapter of his life, Will once said, “I’ve instructed Kathleen, my beautiful bride who remains 29 years younger than I, to buy a first-class ticket to San Francisco, carrying my remains in a box or urn. I want her to get in a car, drive south to the Seal Rock lookout, to that little parking spot there and, with Cypress Point right behind her, distribute me into the Pacific, with the barking seals.”

Seal Rock is up the road up the beach from Pebble Beach, and Pebble was one of Will’s favorite Tour stops, along with Augusta, Hilton Head, Colonial, Hawaii, Westchester, Doral — and every other place the travel department of CBS Sports sent him. In a sense, but only that, Will’s life on tour was limited. From a swivel chair in a trailer in another TV compound, with a phone in one ear and his tinted glasses on his nose, Chuck Will had his eyes on every player, caddie, wife, official, groupie, sponsor and equipment guy on Tour, whether he could see them or not. There is no device that can measure such unique vision. But anybody who knew Chuck Will knew that he had it.