Charlie Sifford: A Portrait in Courage 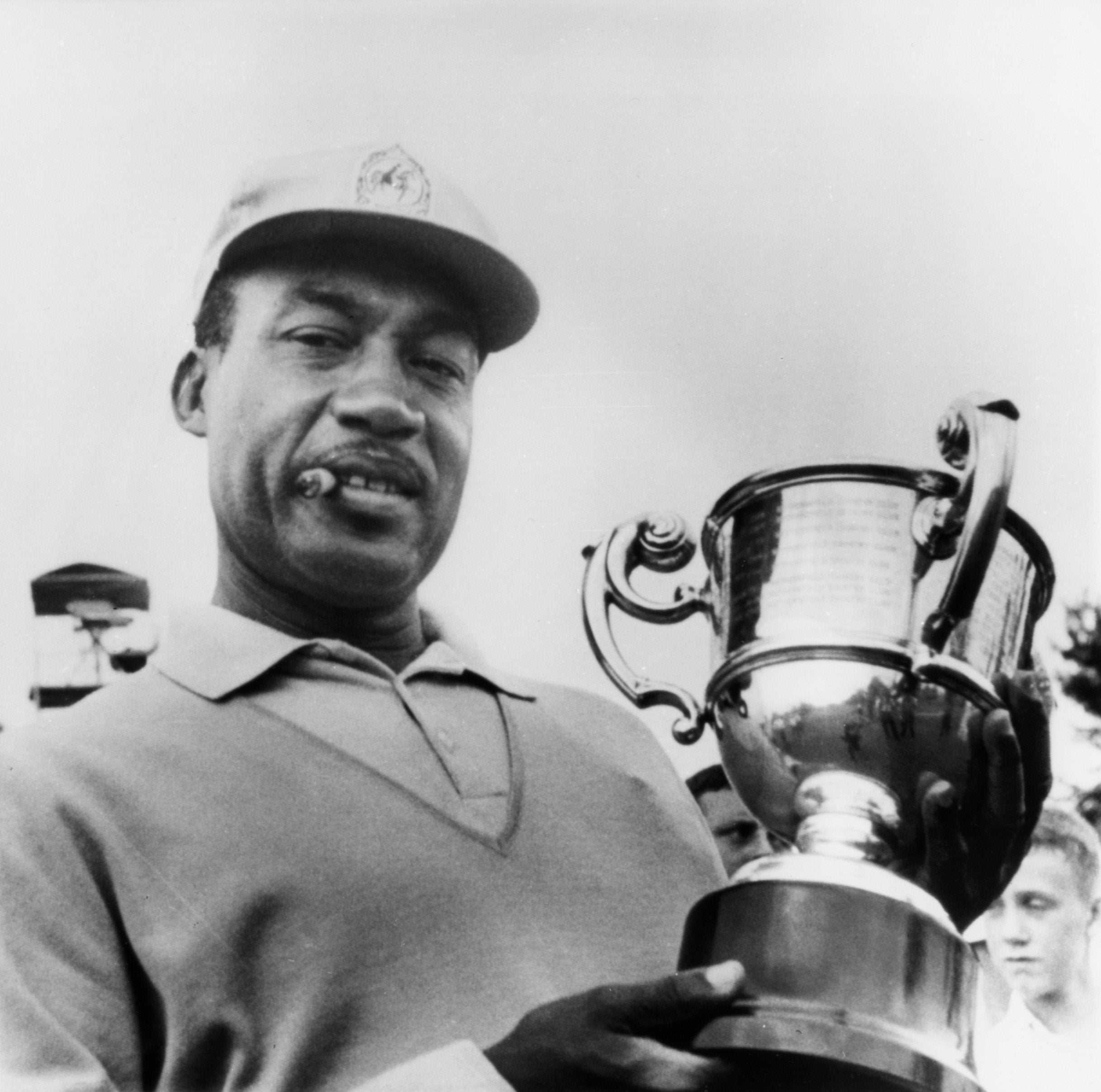 Cigar ever present, Sifford broke through in Hartford in ’67 -- the first Tour victory by an African–American.
AP Photo

If you want to honor the life and times of Charlie Sifford — golf’s Jackie Robinson, who died on Feb. 3 at age 92 — a good place to start would be with a family viewing of the 2009 documentary Uneven Fairways. It’s unfair that you can find the 45-minute film for free on YouTube — somebody should be making money from it — but consider the subject. Sifford, prominent in the film and a towering figure in U.S. golf, never made the money he should have made, either. That’s because he was a black man in a white man’s game. Another example of what the sociologists call “white privilege.”

Sifford served in the Army during World War II. After coming home and all through the 1950s, he couldn’t play in most of the tournaments that Ben Hogan and Sam Snead and the young Arnold Palmer played in. He wasn’t granted full playing status until 1960, way late in his day. Sifford turned 40 in early June of 1962, a couple of weeks before his third U.S. Open.

In the 1960s, along with Pete Brown, Sifford became the face of black golf on the pro tour. (Not that there weren’t plenty of other African-American golfers — many events had six or more blacks.) Tiger Woods calls Sifford “the grandpa I never had.” Woods says, in the documentary as he has elsewhere, that had it not been for Sifford, his father, Earl, might not have taken up golf. In that scenario, Eldrick might never have become Tiger.

In addition to Sifford and Woods, the documentary, narrated by Samuel L. Jackson, features Jim Thorpe, Calvin Peete, the heavyweight champ Joe Louis and other icons of black golf. Sifford talks about why he wouldn’t play money matches against his mentor, Ted Rhodes, nine years his elder and considered the greatest of the black golfers. “I didn’t want something that hard,” Sifford says. “I wanted something soft.”

With his white goatee and tinted glasses and raspy voice, Sifford looks as if he might have played sax for two sets the previous night at the Cotton Club. In the film, one subject after another is wearing either a Kangol hat or a gold necklace or has a big cigar planted in his mouth. So much sui generis style. It’s their look, their speech, their stories — their histories. These gents are quote machines. Thorpe talks about using one ball for so many holes as a kid that “the golf ball was as brown as my face.”

The film is also a reminder that the PGA Tour is as white today as it was during the Eisenhower years. The only good news is that at least now there are no legal obstacles to black participation. At Augusta in 1997, Lee Elder, who in 1975 became the first black to play in the Masters, looked overwhelmed when he congratulated Woods on his 12-shot victory. How many “brown dudes” (to use Tiger’s humorous phrase) will play in the 2015 Masters? Maybe two? Back in ’97, you would have guessed more.

In the ’60s, ’70s and ’80s, golf had much more color, in every way. The film depicts people named White, Black, Brown and Green, and they aren’t just talking heads. You look at these people and know they led lives. When I look at my own golf reporting over the past year or so, by far the most interesting interviews I had were with Pete Brown in Augusta, Jim Dent in Tampa, Jim Thorpe in Boca Raton, Calvin Peete in Ponte Vedra and the caddie Dolphus Hull, aka Golf Ball, in Jackson, Miss. That fivesome of black men found their way to the Tour not because as kids they were led by their fathers to country-club driving ranges and swing coaches. No. They had a compulsion. They were desperate to make money and to do it at a game they loved.

Peete taught himself golf under the lights of a softball field in his early 20s. Brown needed police protection when he beat the white pros at an event in Oklahoma in ’64. Dent, momentarily unable to recall Rickie Fowler’s name in an interview last year, referred to him as “that kid they’re trying to turn into a superstar.” He should be a Golf Channel analyst. When Golf Ball went some period without getting fired (and rehired) by his main man, Raymond Floyd, he told his boss, “You and me is married now.” The hard road can beat you down, but it can also make people more interesting, insightful, alive and expressive. Law school and corporate corridors can suck the life out of your language. These folks wouldn’t know.

Charlie Sifford suffered indignations we can read about and hear about but never truly understand. In the documentary, Peete says had he endured what Sifford did, “I would have been up there with my 2-iron, trying to hit somebody.”

But Sifford used his 2-iron for more useful purposes, even if he never got to bring it out at Augusta National. (His two Tour wins did not get him an exemption into the Masters.) He suffered. But in the tradition of M. Gandhi, J. Robinson and M.L. King, Charlie Sifford learned to turn the other cheek. He described playing in the ’52 Phoenix Open, in a special all-black foursome that included Joe Louis. They were the first group off. On the first day, on the 1st green, they discovered human excrement in the hole. “We didn’t quit,” Sifford said in the film.

Being first is not for the soft. No it ain’t. Rest in peace, sir.