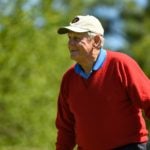 It's time to turn the dream of playing golf with Jack Nicklaus into a reality, just don't forget your checkbook.

What’s the cost of the best round of your life? How much would you pay for the Midas Touch around the greens? The Morgan Hoffman Foundation for Muscular Dystrophy is hoping the answer is ‘a whole lot.’ The Hoffman Foundation, in conjunction with the virtual fundraising site Charitybuzz, is auctioning off some of golf’s most elite experiences to raise money for Muscular Dystrophy research.

The fundraiser features a handful of once-in-a-lifetime experiences across the golf spectrum. For the right price, you can land a round at the Bear’s Club with none other than Jack Nicklaus. Another Bear’s Club opportunity — this one with Justin Thomas and Morgan Hoffman — highlights the opportunities available with today’s stars. How about a round with Hoffman at one of GOLF’s favorite new courses, Ohoopee Match Club, or with Masters champ Charl Schwartzel at Dye’s Preserve?

The Hoffman Foundation fundraiser also features tee times available at many of the country’s top courses. Fans in New York can bid on slots at a pair of the area’s most exclusive tracks, Shinnecock Hills (the host of the 2018 U.S. Open and one of GOLF’s top 10 courses in the world) and Liberty National (right across the river from lower Manhattan). A foursome at Medalist Golf Club — Tiger’s home course and site of the Match II — is among the opportunities south of the Mason-Dixon.

Perhaps the crown jewel of the fundraiser is a literal crown jewel — a 24 karat gold Scotty Cameron Newport 2 putter. The putter, which is engraved with the Hoffman Foundation logo, features a solid gold face to go along with a matte black finish and red detailing.

The Hoffman Foundation was founded in 2017 for Morgan Hoffman, a PGA Tour pro who was diagnosed with Facioscapulohumeral muscular dystrophy (FSHD). Hoffman, who won the PGA Tour Courage award in 2020, played collegiately at Oklahoma State with Rickie Fowler and was a member of the 2009 Walker Cup Team. He played six years on Tour prior to his diagnosis and has continued to compete professionally under a major medical extension.

According to the foundation’s website, all the money raised will go toward the creation of the MHF Health and Wellness Center to provide better treatment options for those suffering from muscular dystrophy and other neuromuscular diseases. You can view all of the items available through the auction by following the link here. The auction ends at 3:00 p.m. ET on July 9.